In 1993, the United States Mint introduced a new style of product offering that would be used on several occasions over the coming years. This was the Commemorative Coin and Stamp Set, which included a recently issued commemorative coin together with an official stamp from the United States Postal Service.

The special collector set was issued for the Bill of Rights Commemorative Coin Program authorized under Public Law 102-281. The program included $5 gold coins, silver dollars, and silver half dollars available in proof and uncirculated versions. The obverse design of each coin featured James Madison, known as the “Father of the Bill of Rights.” Surcharges raised from the sale of coins went to support the programs of the James Madison Memorial Fellowship Foundation.

The pre-ordering period for the commemorative coins opened in February 1993 with pre-issue prices available until March 5, 1993. The US Mint initially offered individual options for each coin, along with proof or uncirculated two-coin and three-coin sets, as well as a comprehensive six coin set. Three different collector products were also available, comprising the 1993 Prestige Proof Set, the Young Collector’s Set, and a Coin and Medal Set. 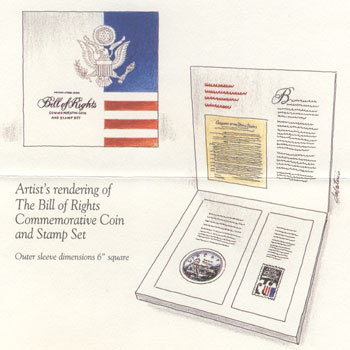 It would not be until later in the summer when the Commemorative Coin and Stamp Set was announced to collectors. The offering followed the sell out of the Young Collector’s Set, and promotional materials for the new set cautioned that another quick sell out was possible. It was also indicated that this would be the first time in US Mint history that a commemorative coin and stamp had been offered together as a set.

Orders were accepted for the new product before it was even ready to be photographed. An artist’s rendering of the set was provided along with the order form offering the sets at $14.50 each. 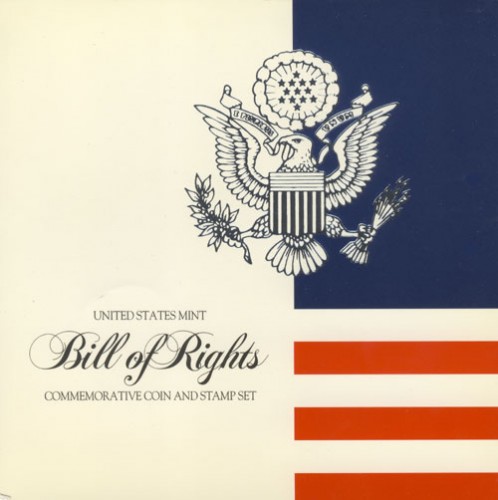 The USPS stamp included in the set was from the Constitution Bicentennial Series and was first issued four years earlier in 1989 to commemorate the 200th anniversary of the Bill of Rights. The stamp carried a value of 25 cents, and the design featured an eagle clasping a quill pen in its beak. 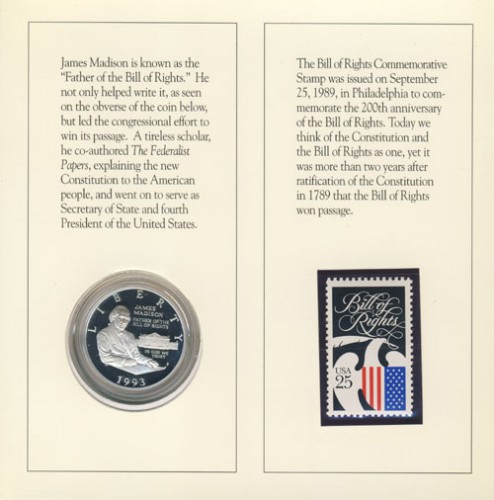 Both the stamp and coin were placed within a folder containing a small sized image of the Bill of Rights and descriptions of the coin and stamp. The back of the folder included a certificate of authenticity signed by David J. Ryder, Director of the United States Mint at the time of issue, along with the coin and stamp specifications.