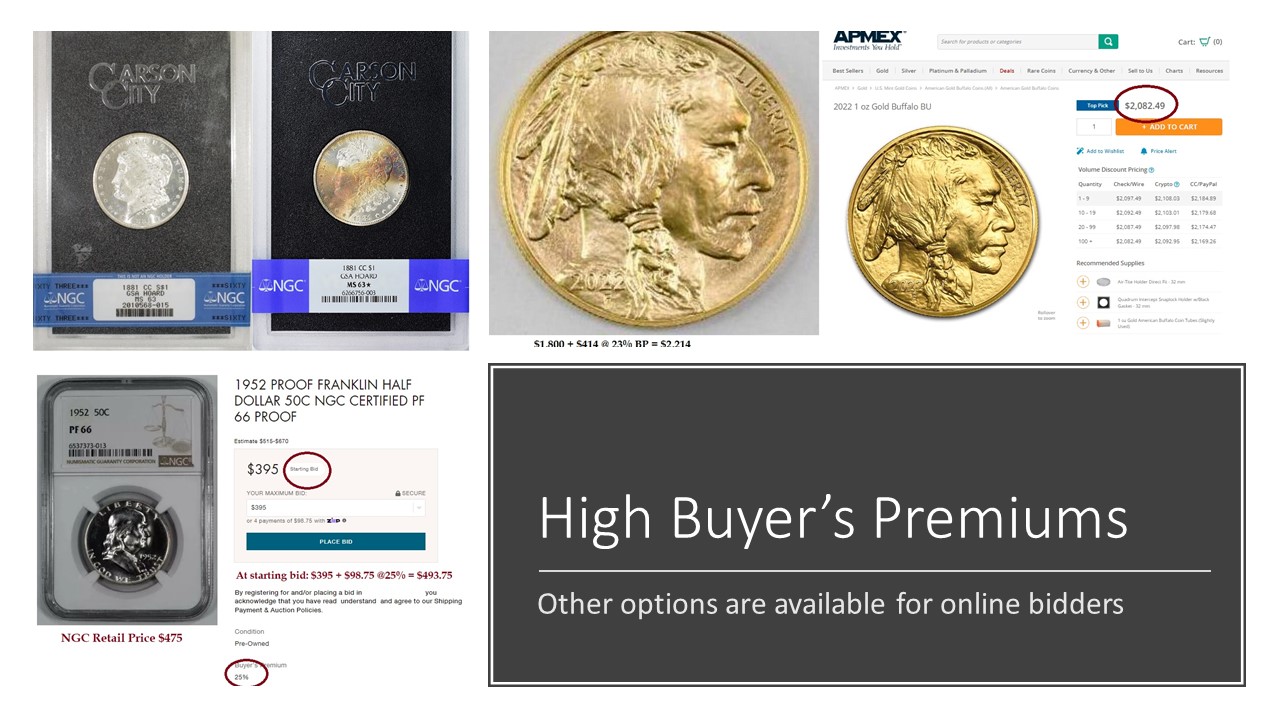 Online bidders have many options to snare coins for collections or investment as hundreds of auctions are available via such portals as Proxibid, HiBid, and Live Auctioneers, among others. In our excitement, we may overlook the key component that determines whether we will make a score or suffer a loss: The buyer’s premium.

Internet auctions used to be more exciting years ago when I began monitoring them for numismatic publications, including Coin Update. I am in my 15th year writing for this publication. Here’s a 2010 post discussing hyped grading in Proxibid auctions.

At the time the standard buyer’s premium seldom reached more than 10%. The “BP” is a percentage of the hammer price. Between 2010-15, most premiums averaged between 10-12%. Moreover, sellers rarely set starting bids or hid reserves. Sessions were usually both online and live, with those attending in person seldom paying any buyer’s fee at all. That, too, has changed in recent years with onsite buyer’s also paying fees with discounts for cash.

The purpose of this column is not to call out those companies. They have every right to set their terms of service, and more power to them if they are pleased with their business models. Rather, I am recommending that you take the BP into account when bidding because there are usually other, less expensive options.

Let’s take as an example a coin that usually invites several bids: An 1881-CC Morgan dollar holdered by NGC. 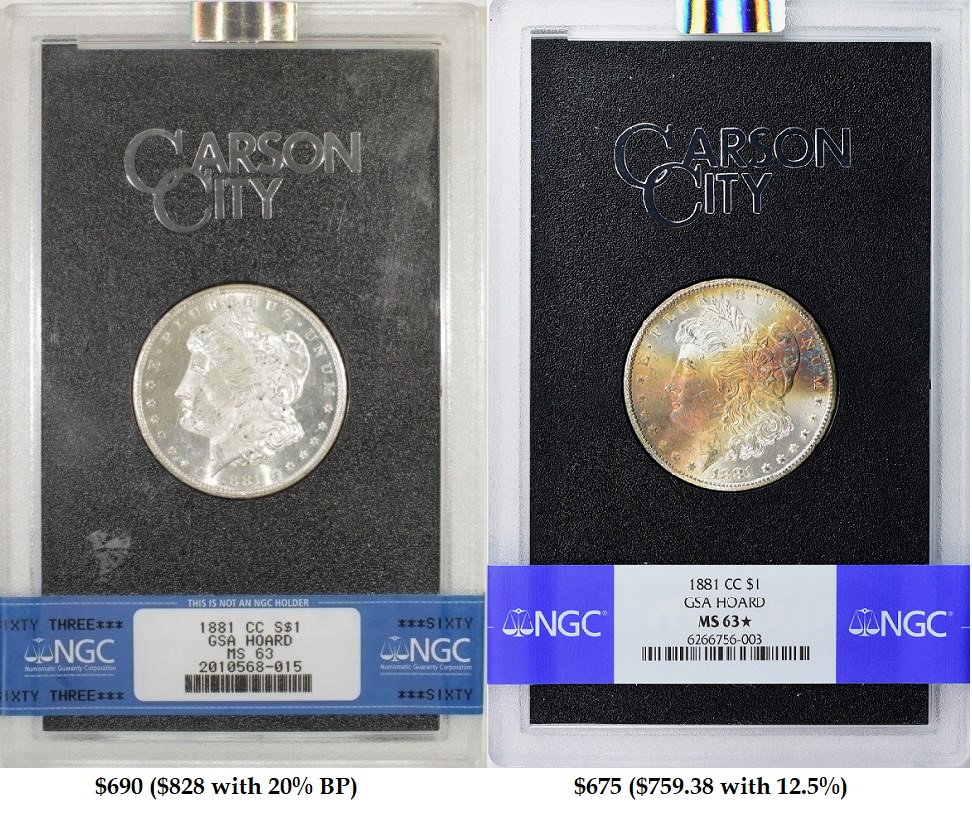 The coin on the left sold for $828 with a 20% BP. The less expensive coin on the right, which should command a much higher bid because of attractive toning with a “star” designation for eye appeal, is $69 cheaper because GreatCollections only charges 12.5% BP.

When Ian Russell, owner of GreatCollections, was asked about BPs, he had this to say: “20-25% seems greedy as a buyer’s fee. We have no plans to increase ours — which is 10% if you pay by check/wire/eCheck.”

The greater the value of a coin, the more you have to pay with a high BP, meaning you might think twice before bidding on common gold coins. Here’s another example:

A few auctioneers have set their BP at 25% with a starting bid close to the retail value of the coin in question. Here’s an example: 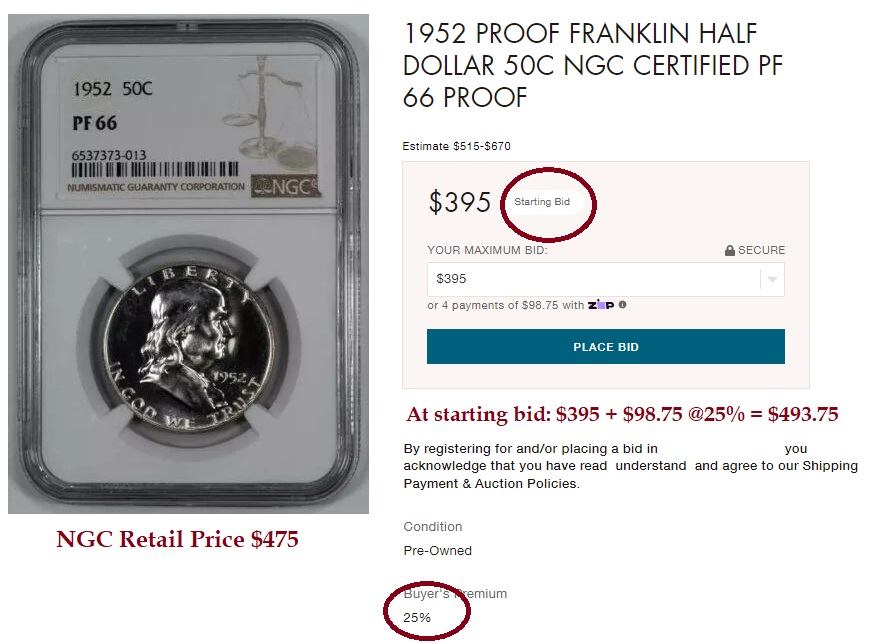 As you can see, even if you won this coin with one bid and no competitors, you would be paying more than retail value. Before bidding on any NGC or PCGS coin, always check PCGS CoinFacts for recent auction prices. In this case, similar coins at PF-66 are going for about $360. So if you want this coin, that can be a guide for how much you should bid.

Some of my favorite auctioneers charge low or no buyer’s premiums.

Darron Meares, who runs coin auctions on Proxibid under Meares Property Advisors, charges 12%. He notes that Proxibid charges 2% in “sell-through” fees on timed online auctions. “We keep the 10%, which covers costs, etc., and keeps bidders coming back. Other platforms do not charge the auctioneer the sellthrough (fee) and the auctioneer keeps most, if not all, of those high BP fees.”

Jay Temchack, Temchack Auctions, sells on HiBid with no BP. “Last week I had a table at the ANA coin show in Colorado Springs with Lake Region Coin & Currency. Questions were asked about buyers’ premiums and packing/shipping costs. I know auction companies pitch or say, “We can sell your items at NO cost to you. We charge the buyers.” Some of the large auction houses will pay 102%-105% of the hammer price to the sellers just to get the big-ticket items.

“My business has grown and more positive comments keep coming by not having a buyer’s premium for my auctions. Keep it simple for the bidders! They don’t like having to keep thinking, adding percentages to their bids to know what they want to pay. Maybe 10%-13% is one thing but over 15% of buyers start to complain.

“I want the owner to get the most out of their dollars and be happy.”

That’s the spirit of a good auction in which the seller is happy, moving their lots, and the bidders are happy, buying below retail.