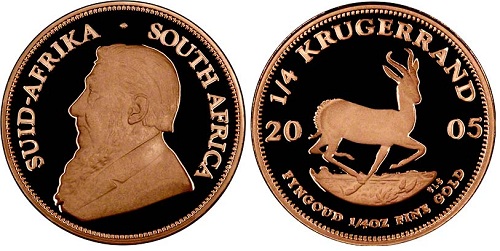 Rare coin dealer and collector Dwight Manley has issued the following statement regarding his encounter with a counterfeit gold Krugerrand housed in a realistic counterfeit NGC holder.

“A frighteningly deceptive counterfeit has been encountered, and the world needs to be told about it. We recently realized that a 2005-dated quarter-ounce South African Krugerrand labeled NGC Proof 70 is not only a counterfeit coin, it is housed in a counterfeit Numismatic Guaranty Corporation holder that has the same certification number on the label as a genuine 2005 PF 70 one-quarter ounce Krugerrand listed in the NGC data base.

“The fake was purchased on October 23, 2015 by a knowledgeable employee of Fullerton Coins & Stamps over the counter from a semi-regular customer. Before making the purchase, the employee checked the NGC website to see if the certification number and coin description matched. They did: cert number 3676849-006. 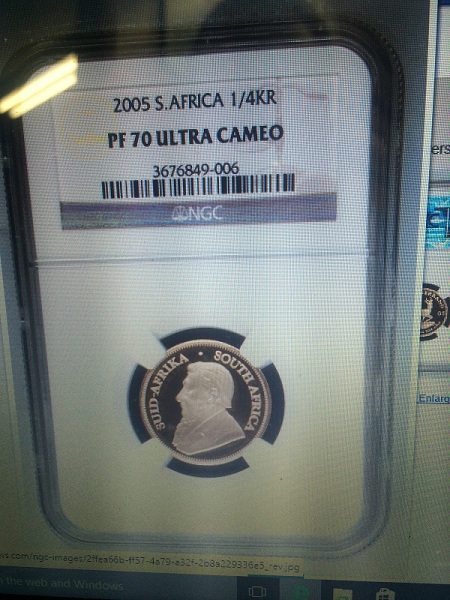 The counterfeit quarter-ounce Krugerrand in a counterfeit NGC holder that was purchased in Fullerton, California. (Photo courtesy of Dwight Manley.)

“I recently examined the coin, and it just didn’t look quite right. I did a side-by-side, inch-by-inch comparison between the encapsulated coin the store purchased and the obverse and reverse photos on the NGC website. The reproduction of the NGC hologram on the fake is almost dead on the same; however, there is one distinct difference between fake and genuine on the left side of the front insert label. On the fake coin, the circle in the NGC logo (an encircled balance scale) goes almost entirely around the P in the grade PF 70.  On the genuine coin’s label, the P is outside the logo circle.

“An amazing amount of effort obviously went into creating a fake coin and a fake holder with a cert number and description that match a genuine coin. I’ve notified NGC, but in the meantime, I caution collectors and dealers to watch out for any similar, deceitful and dangerous counterfeits.”

Dwight Manley is the owner of Fullerton Coins & Stamps in Fullerton, California and Managing Partner of the California Gold Marketing Group. A quarter-century ago, he assisted in breaking up a counterfeit coin and counterfeit holder scheme.