For the first time, Professional Coin Grading Service will be displaying the “End of the Trail VIII Collection” of Morgan Silver Dollars, which carries the lowest grade point average in the “Low Ball” PCGS Set Registry®. This extremely difficult to assemble numismatic collection will be displayed at the PCGS booth (#701) at the upcoming American Numismatic Association 2014 Chicago World’s Fair of Money, August 5 – 9.

“The appropriately named ‘End of the Trail’ Morgan dollar collection has a Poor weighted grade point average of only 1.130. It is the all-time finest, or in this case, the worst-of-the-worst basic Morgan dollar set in the Low Ball category. While collectors have a lot of fun with the Low Ball sets, remember that it often is just as difficult and exciting to build a low grade set as it is to assemble a high grade collection,” said PCGS President Don Willis.

Free, educational brochures about this collection will be available at the show while supplies last. The brochure contains illustrations of the top ten favorite low-grade Morgan dollar coins of the set’s owner, collector Mike Hoyman of Alaska. 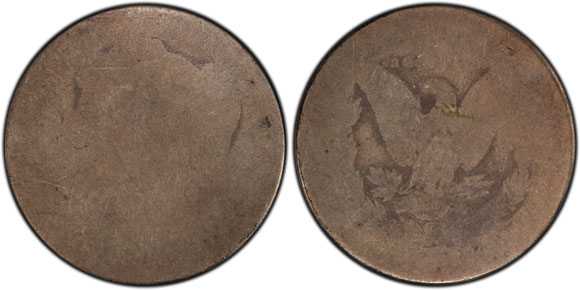 Hoyman’s number one favorite is an 1878 eight tail feathers variety that is missing more than 99 percent of the obverse but has enough reverse design remaining to distinguish the eight feathers. It is graded PCGS PO-1.

PCGS authenticators were unable to determine the specific VAM variety for that coin and some others in the collection because the grades are so low. Of the 97 coins in the set, 87 of them are graded Poor (PCGS PO-1) and the other 10 are graded Fair (PCGS FR-2).

The entire End of the Trail VIII Collection can be viewed online at www.pcgs.com/setregistry/alltimeset.aspx?s=82663.

“PCGS launched the Low Ball registry category in 2007 as a fun and challenging way for collectors to compete to see who has the lowest graded coins. It’s much harder than you would think, but there are now 825 registered Low Ball sets of U.S. coins,” said BJ Searls, Collectors Universe Set Registry & Special Projects Director.

The PCGS Set Registry (www.pcgs.com/setregistry) was established in 2001 and now hosts over 70,000 U.S. and world coins sets. For additional information about PCGS and its services, visit www.PCGS.com or call PCGS Customer Service at (800) 447-8848.