The United States Mint currently offers a one ounce silver National Medal struck for the 10th anniversary of September 11, 2001. Although these types of offerings have been infrequent, the US Mint has offered other silver medals in the past, such as Benjamin Franklin Firefighters National Silver Medal offered in 1993 and 1994.

The issuance of these medals was authorized under Public Law 102-406 signed into law on October 12, 1992 by President Bush. The legislation provided for the minting of medals in commemoration of Benjamin Franklin and to enact a fire service bill of rights.

The medals were specified to contain 1 ounce of silver with a design containing suitable emblems, devices, and inscriptions in commemoration of Benjamin Franklin’s contributions to the American Fire Service. The silver medals had a maximum authorized mintage of 1.5 million. 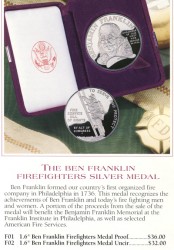 Designs for the Benjamin Franklin Firefighters Silver Medal included Franklin’s portrait on the obverse with an original Union Fire Company hat. The inscriptions read “Benjamin Franklin” and “Organizer of Our First Fire Service in 1736”. The reverse featured a modern firefighter rescuing a child. Inscriptions read “To Serve and Protect”, “Fire Service Bill of Rights”, and “By Act of Congress”.

The medals were struck at the Philadelphia Mint in proof and uncirculated versions, with the same planchets used to strike American Silver Eagles. The medals contained 1 troy ounce of .999 fine silver and had a diameter of 1.598 inches.

The price of each medal included a surcharge of $15 to benefit the Benjamin Franklin Memorial at the Franklin Institute in Philadelphia, as well as selected American Fire Services.