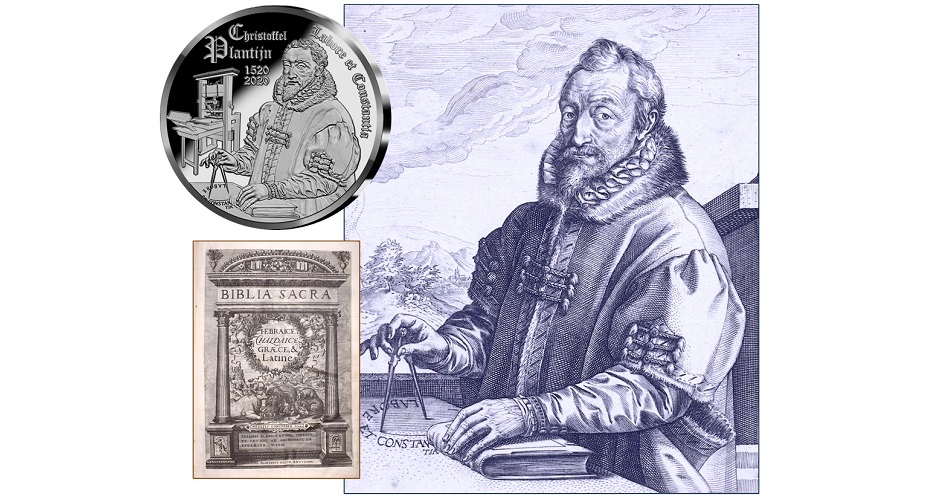 The Belgian Ministry of Finance has issued (19th August) new €10 silver Proof collector coins in honour of the 500th birthday anniversary and recognition of 470 years since the arrival in Antwerp of the world’s first industrialised book printer. In terms of the actual printing of the Bible in the Lowlands, there is simply one name which cannot be left unmentioned: Christoffel Plantin.

He was born around 1520 in Saint-Avertain near Tours, France, but settled around 1550 in more religiously tolerant and economically prosperous Antwerp, then the commercial metropolis of Europe. The following year, he was appointed as the preferred printer in the Guild of Saint Luke, and it was at this juncture that his company would take the path of growing into the first industrialised printer in the Western World. At the peak of its productivity, Plantin’s printing house, whose name De Gulden Passer or the “Golden Compass,” bore the image of a gold compass with the inscription Labore et Constantia (“Labour and Fortitude”). At the company’s height, and during his lifetime, he had no fewer than 21 presses and 160 employees, an astonishing accomplishment at the time. In 1570 Plantin was named Architypographus Regius (“Royal Arch Printer”) by Spain’s King Philip II. In 1579, he and his company were also appointed as the City of Antwerp’s official printer. His printing house was known for producing a varied selection of publications, from religious works such as Bibles and breviaries, books of psalms, hymns, and prayers to premium quality scientific publications on mathematics, cartography, and medicine. However, the more popular publications, in terms of quantity, were those of music, and, not surprisingly, dictionaries.

Plantin’s print shop located on the Friday market was also a regular meeting place for leading scholars of the time. The Spanish humanist and sometimes editor of Plantin’s Antwerp Polyglot Benito Arias Montano (1527–1598), would write about the printing house by reminiscing, ”Nowhere was it so full of spiritual activities, such a scientific élan, such a fruitful collaboration.”

By the time of his death in 1589, the list of publications produced by Golden Compass consisted of more than 2,450 works during 34 years, which, even by today’s standards, is an impressive accomplishment. In an effort to attract business from other countries, branches of Golden Compass shops were opened in Leiden in the Netherlands and in Paris where the shops also sold maps, art prints, globes, and Belgian lace. After Plantin’s death, it was one of his sons-in-law, Jan Moretus, who took over the company, and after him, nine further generations of the Moretus family followed.

Ultimately, by 1876, and as changing market conditions affected the company, Golden Compass Printers’ last owner, Jonkheer Edouard Moretus, closed the business for good. The publishing house itself and its entire historic contents were handed over to the city of Antwerp and the Belgian state. The year after, the residential building and printing house were opened to the public after it had been transformed into the Plantin-Moretus Museum. Today, the Plantin-Moretus Museum, which is still located in their original premises on the Friday Market in Antwerp is a printing museum which focuses on the extraordinary work of the 16th-century printers Christophe Plantin and Jan Moretus.

The Royal Dutch Mint produces the €10 silver Proof collector coins at their facilities in Houten under license by the Royal Belgian Mint. Designed by Royal Belgian Mint artistic director Luc Luycx, the obverse side recreates a well-known engraving of Christoffel Plantin at a drafting table with a compass element in his right hand. In contrast, his left hand is placed on a bound book. The creed of his publishing company is seen under the compass. A printing press is seen to the left of Plantin’s image and the stylised text, CHRISTOFFEL PLANTIN 1520 1589, is placed between the two images. The additional text LABORE ET CONSTANTIA is placed along the upper-right edge.

The standard reverse side designed by Luc Luycx includes an EU map partially encircled with the words BELGIE – BELGIQUE – BELGIEN, representing the three official languages of Belgium. The denomination of 10 EURO is seen on the left half along with the year of issue, the Royal Dutch mintmark, and the privy mark of the Royal Belgian mintmaster.

Available from September, each Proof quality coin is individually encased and presented in a custom case, accompanied by a numbered certificate of authenticity. For additional information about this coin and other coins issued by the Belgian Ministry of Finance, please visit their website.