The National Bank of Belgium has issued new silver Proof collector coins which are part of the Europa Star programme, a unique numismatic project that was first launched in 2004, bringing various European monetary institutions together around a common annual theme. Each of the coins in this series has the unique characteristic of being marked with a stylised “E” logo which resembles the euro insignia, along with a star. The programme was relaunched in 2016, highlighting the Ages of Europe. This year’s theme focuses on the Renaissance era, defined as a period in European history between the 14th and 17th centuries that led to the transition from the Middle Ages to modernity.

Belgium’s contribution features the life and artworks of Pieter Breugel the Elder (c.1525-30–1569) on the 450th anniversary of his death. He has been described as one of the most significant artists of Dutch and Flemish Renaissance painting. A painter and printmaker from Brabant, he was best known for his landscapes and peasant scenes, pioneering the practice of fusing these two particular subjects as the focus in large paintings. Not much is known about the early life of Breugel. It is believed that he was born between the years 1525 to 1530 and possibly in the town of Breda, located in the province of North Brabant, in the present-day Netherlands. The time of his birth was deduced from the fact that Bruegel entered the Antwerp Painters’ Guild in 1551. Even less is known about Bruegel’s family, but it has been hypothesised that he may have come from a predominantly peasant background, which may have accounted for the many depictions of a peasant-theme or way of life in much of his work. He studied under the Antwerp master painter Pieter Coecke van Aelst (1502–1550), whose daughter, Mayken Coecke Bruegel, he would marry in 1563. The couple lived in Brussels, and together they would have three children: Pieter Brueghel the Younger (c. 1564/65-1638), who would become a renowned painter in his own right; Maria (born 1566), and Jan Brueghel the Elder (1568-1625), also a renowned painter during his lifetime.

Bruegel became a formative influence on Dutch Golden Age painting, cultivating a reputation for his innovative choices of subject matter and stark imagery. Curiously, Bruegel painted no formal or traditional portraits, which, in this era, was considered a mainstay of Flemish art. After his training in Italy, he returned in 1555 to Belgium and settled in the city of Antwerp, working mainly as a prolific designer of prints for the leading publishers of the day. It was at the end of that decade that he switched to painting as his main medium. It was at this time where much of his most famous works of art would emerge, during little more than a decade before his early death. While at the height of his notoriety, Bruegel died in his early 40s on the 9th September 1569 and was buried in Brussels. Today it is known that about 40 generally accepted surviving paintings, 12 of which are in the Kunsthistorisches Museum in Vienna, survived after his death, though a number of others are known to have been lost. 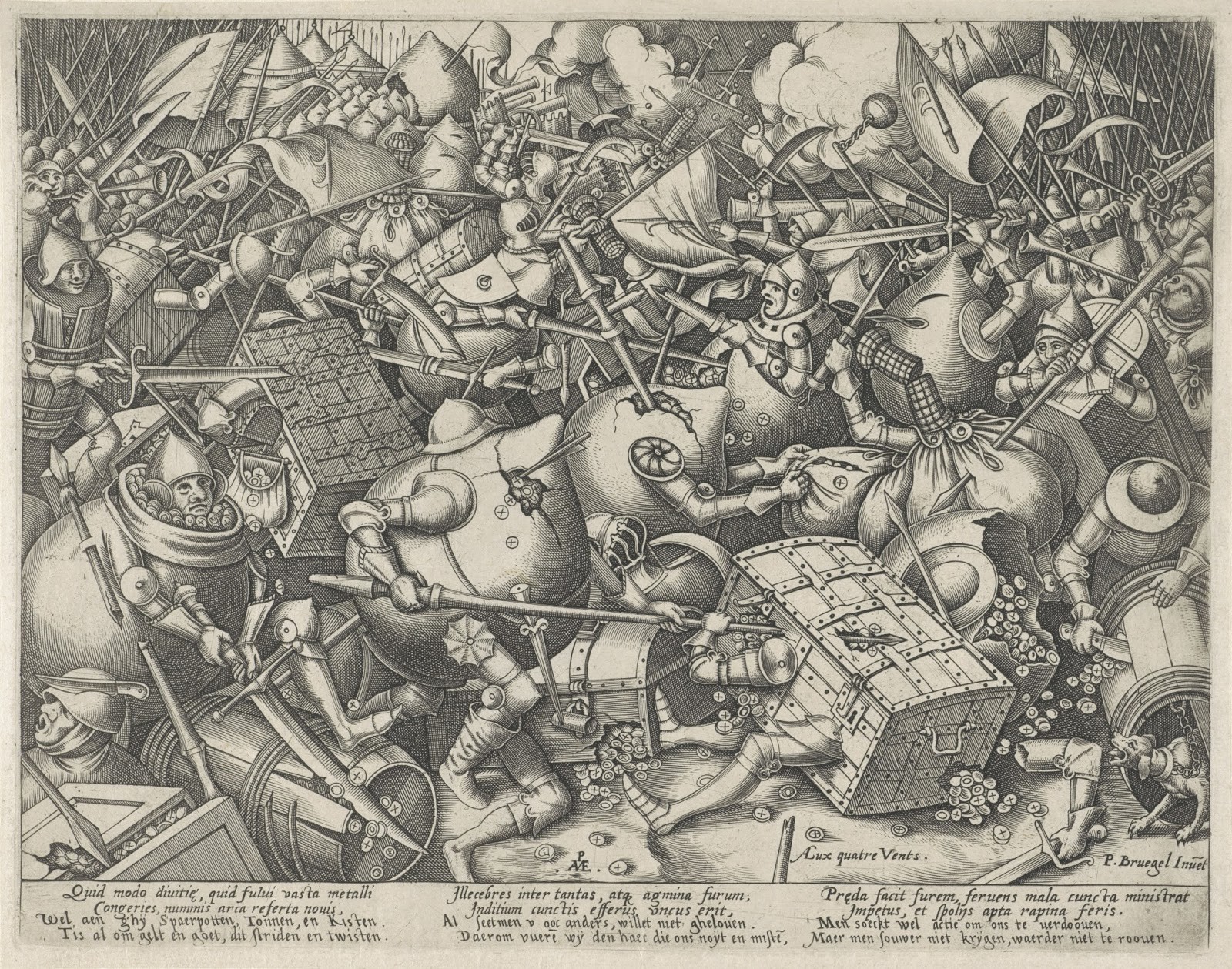 The Royal Dutch Mint produces the coins under licensing of the Royal Belgian Mint on behalf of the National Bank of Belgium. The design is the work of well-known artist Luc Luycx, which depicts a particular detail from Bruegel’s work entitled The Battle of the Moneybags and the Strongboxes (1563).

A special technical etching application (MPI technique) is also used in the coin’s production to highlight the background imagery of this particular print.

The motif on the reverse side includes a common design which is included on all the countries’ coins taking part in the Europa Star programme. The design features, as its primary focus, a star that inspired from the logo. In the centre is the common national standard design denoting Belgium and is designed by Luc Luycx. It includes an EU map partially encircled with the words BELGIE BELGIQUE BELGIEN, representing the three official languages of Belgium. The denomination of 10 EURO and the year of issue, 2019, are placed to the right of the map.

The Proof-quality silver coins are individually encapsulated and presented in a custom-branded Royal Belgian Mint case decorated with the 12 stars representing the European Union and are accompanied by a serially numbered certificate of authenticity. For additional information about this coin and others issued by the National Bank of Belgium, please visit the website of the Royal Mint of Belgium.

If cryptocurrencies become one of the most common forms of exchange, will banks form around them?