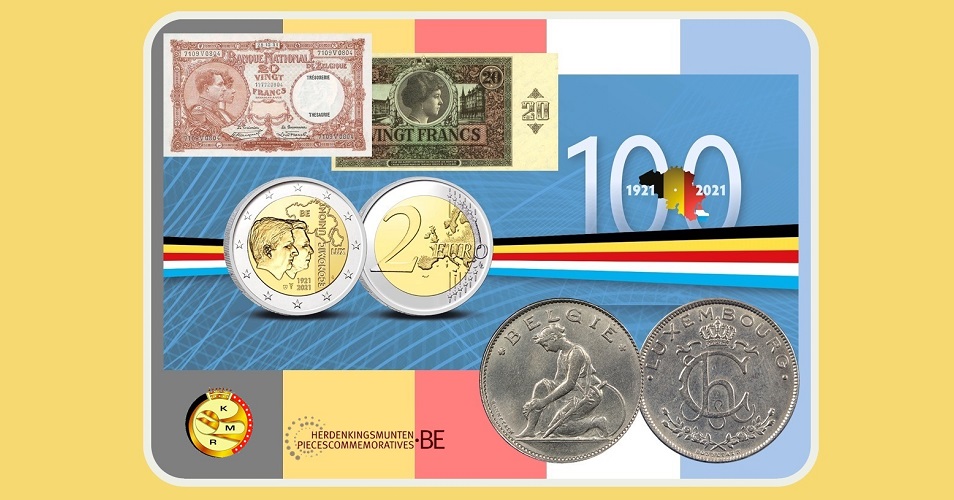 The Royal Belgian Mint have launched their new 2021-dated commemorative €2 coins which celebrate the centenary anniversary of the economic union between the Kingdom of Belgium and the Grand Duchy of Luxembourg. The modern history of these two countries began when both entities were part of the United Kingdom of the Netherlands, which emerged after the defeat of French Emperor Napoleon in 1815. The lowland countries were united under the crown of William of Orange, who became king of the Netherlands the same year. Following the secession of the territory known as the southern provinces, or the former Southern Netherlands, in 1830 from the United Dutch Kingdom, the establishment of an independent Kingdom of Belgium with Leopold of Saxe-Coburg (1790–1865) as its first sovereign was recognised by European powers one year later.

After the First World War, Belgium and Luxembourg, with their close dynastic ties, established the Belgian-Luxembourg Economic Union (BLEU) as a customs union. The treaty was signed on the 25th July 1921 in Brussels by representatives of both countries. On 23rd May 1935, the BLEU treaty was supplemented by three other treaties or addendums, which were further amended in 1963. The first addendum dealt with an agreement on financial and monetary affairs, the second agreement established a common regime for the regulation of imports, exports, and transit and the final agreement was on the subject of establishing a special income community with regard to excise duties on alcohol.

As a consequence of the initial treaty, both the Belgian and Luxembourgish franc currencies were united, as both were traded at the same rate and considered as one of the most important measures of BLEU. These exchange rates remained the same from the end of World War II with some coinage between the two countries being interchangeable. This monetary union remained in place until their replacement by the adoption of the euro by both countries in 2002. A new revised BLEU agreement was signed in 2002 with the new text aligning the provisions of the BLEU with those of the European Union, but also to take into account the new division of competencies in the Belgian federal state. This new treaty was thus co-signed by the three Belgian regions of Flanders, Wallonia, and the city-state of Brussels. It also broadens the scope of Belgian-Luxembourg cooperation beyond the economic objective, providing for enhanced cooperation within international institutions and intensifying relations in the fields of development aid, defence, and peacekeeping.

The commemorative €2 bi-metallic coins are produced by the Royal Dutch Mint at their facilities in Houten and on behalf of the Royal Belgian Mint. The obverse side of the coin is designed by RBM graphic artist Luc Luycx and depicts both His Majesty King Philippe and his first cousin, the Grand Duke Henri in a double portrait with both sovereigns facing to the right. Both men are facing a map outline of their respective countries as continuous allies in the Belgian-Luxembourg Economic Union. The vertical text placed to the right of the portraits reads ECONOMIC UNION in English. The commemorative years 1921 and 2021 are seen just below the portraits. The primary design is surrounded by a circle of 12 stars representing the European Union.

The Brilliant Uncirculated quality coins are presented in a coin-card format with text in Dutch and English or French and German.

The Proof-quality coins are encapsulated and presented in a blue case accompanied by a certificate of authenticity. For additional information, please visit the Royal Belgian Mint website.

Available for dispatch in August 2021