The Royal Mint have announced today (26th July) that the special £5 silver crown minted in honor of the newest member of the Royal Family, His Royal Highness Prince George Alexander Louis of Cambridge – son and first child to the Duke & Duchess of Cambridge, has sold almost 80% of the stock produced.

The coin, a silver crown depicting the iconic rendition of St. George slaying the dragon by famed medalist and sculptor Benedetto Pistrucci was used as a commemorative design and it was fitting that when it was announced that the new Prince would be named “George” this sent the coin straight on to becoming a sell-out in a short period of time. The coin’s reverse had not been seen on British crown coins since 1951 when a commemorative 5 shilling coin was issued in honor of the Festival of Britain. A silver version was not produced since 1902 when it was used on the inaugural coins of King Edward VII.

This particular issue is considered by most avid British coin collectors to be the definitive coin of the current monarch Queen Elizabeth II as this beautiful British design has never been used before on any of the commemorative or circulation crown coins before or after decimalization. Five previous monarchs have issued a circulation or commemorative crown coin using the Pistrucci design since its debut in 1817. 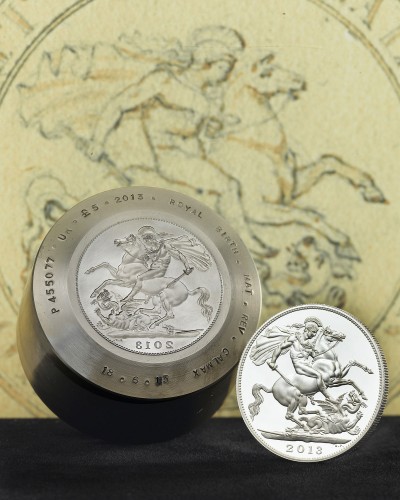 The Royal Mint offers a behind the scenes look at one of the dies which was used for the coin’s production as well as a firsthand look at the finished product. (Click above for a larger image.) The mintage for this key classic was set at 10,000 pieces produced to proof quality.

Collectors who wish to acquire this coin are urged to place an order soon to avoid disappointment. The birth of the new Prince George was announced on the 22nd July and the baby’s name was announced on the 24th after a visit from the child’s great-grandmother Queen Elizabeth II – the name George is thought to be tribute to her own father who ascended the throne in 1936 as King George VI. Dispatch of this coin is expected to commence from the 23rd August.

For more information on these and other coins offered by the Royal Mint, please visit their website at: http://www.royalmint.com/shop/St_George_and_the_dragon_5_pound_Silver_Proof_Coin