The 1936 Battle of Gettysburg Commemorative Half Dollar is one of the more popular issues of the classic commemorative series. Issued to mark the 75th anniversary of the Battle of Gettysburg, the coins were sold by the Pennsylvania State Commission, who did a thorough job trying to market the coins to the collecting public. Despite this, almost half of the mintage would eventually be destroyed, and now it is one of the more sought-after of the classic commemoratives.

The 75th anniversary in 1938 was a historic one for many reasons. While the 75th anniversary was a relatively small event compared to the one a quarter century earlier, which was held in Gettysburg and saw more than 50,000 people attending many events and numerous unit reunions. The 75th anniversary, amazingly, still had Civil War veterans from around the country attending. Needless to say, these men had reached a rather advanced age, and this would be among the last events where so many Civil War veterans gathered together. Besides approximately two dozen men who had actually fought in Gettysburg there were a total of approximately 1800 veterans attending the reunion held during the first weekend of July 1938.

Known as the “Blue and Gray Reunion” events included a parade, the shaking of hands of Union and Confederate veterans across a stonewall, a simulated air raid and the unveiling of the Eternal Light Peace Memorial by President Roosevelt. The idea for the memorial had originated before the 50th anniversary in 1913 but plans were postponed and the “peace memorial” would not be unveiled until the 75th anniversary. The monument stands to this day and is open to the public, one of the largest monuments of a total of 1,320 monuments dedicated to the events, units and individuals of the Battle of Gettysburg. 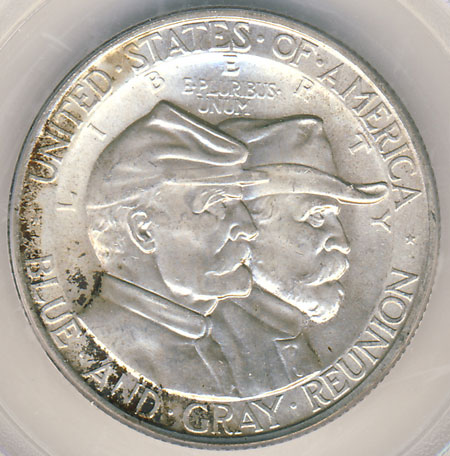 Among the many souvenirs that were available during the first weekend of July 1938 (like the 50th anniversary, the dates of the 75th anniversary fell on a weekend) were the commemorative coins authorized two years earlier. They had been struck at the Philadelphia Mint in June 1937 and were offered for $1.65 each. Designed by Frank Vittor, the obverse featured the busts of a Union and Confederate soldier, both in contemporary war uniform. Above the two men is the motto E PLURIBUS UNUM, and circled around them at the upper portion of the coin is LIBERTY. A circle divides this part of the design and the following. Two stars are seen at three and nine o’clock respectively. Within the ring created by the circle we see UNITED•STATES•OF•AMERICA in the upper half and BLUE•AND•GRAY•REUNION in the lower half. 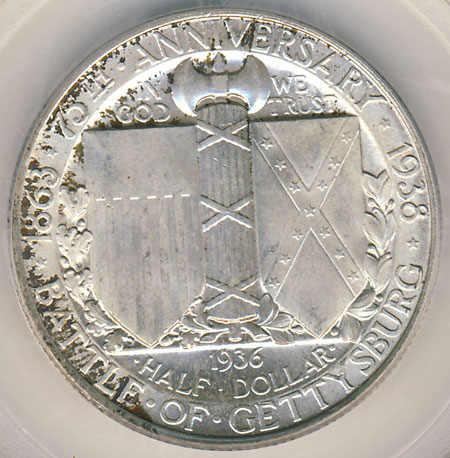 The reverse is one of the busier designs within the commemorative series. In the center we see the shields of both the Union and the Confederate army, divided by a fasces, with two blades visible at the top. Right next to the blades is IN GOD WE TRUST, with two words on each side. Around the shields we see both oak and olive branches. Right below the fasces is the date the coin was authorized, 1936, with the denomination right below that, as •HALF•DOLLAR•. As on the obverse a circle divides the central part of the design with the outer lettering. Along the bottom is *BATTLE•OF•GETTYSBURG*, the dates 1863 and 1938 are seen at approximately three and six o’clock and *75TH•ANNIVERSARY* is along the top. Interestingly (and perhaps a bit confusion) the date the coins were actually struck (1937) is nowhere to be found on the coin.

The fact that the coins were authorized and dated a full two years and struck thirteen months before the actual anniversary is an indication of the true reason this happened: profit. The promoters of the issue (a group that had its headquarters at the Gettysburg Hotel and was lead by Paul L. Roy, who was responsible for the marketing) made use of a couple of rather deceptive marketing methods meant to increase interest in this issue. Initially the plan was to divide the authorized mintage of 50,000 pieces over the three Mints (Philadelphia, Denver and San Francisco) in operation at the time, but this was not authorized and all 50,000 pieces (plus 28 held apart for assay purposes) were struck at the Philadelphia Mint.

Initially collectors who purchased coins expected to receive three different issues from three different mints. When it turned out that this was not going to happen Roy informed the purchasers that three Philadelphia coins would be sent, although he did give the option of a refund. With still a large number of unsold coins on hand he later announced that the issue had been oversold in order to attract more awareness, but this did not help either. Eventually almost half of the mintage remained unsold. For a time the coins were marketed through the American Legion for the inflated price of $2.65 each, but few were sold through that outlet and eventually 23,100 coins were returned to the Mint and melted, leaving a net mintage of 26,900 Gettysburg Commemorative Half Dollars.

This is one of the more popular classic commemoratives and is often marketed, creating fluctuations in price and making it one of the more valuable classic commemoratives despite a relatively large number of pieces available in uncirculated condition at any given time. When money is no issue the Gettysburg Commemorative Half Dollar is available in all grades up to MS-66. The collector of even higher certified coins should have multiple opportunities to purchase MS-67 graded examples every year, although demand for such pieces is high, especially when the numerical grade is combined with attractive toning. In MS-68 it’s a true rarity, with perhaps no more than half a dozen certified, and most of these are in strong hands, with very few examples sold at auction in the past decade.