It has been announced by the European Commission that a recent application by the Royal Belgian Mint to produce a commemorative €2 coin commemorating the victory of the allied forces – those of Great Britain, Prussian and Dutch forces against Imperial forces of Napoleon, has been withdrawn. The French government had expressed their opposition against the coin’s production and of commemorating the upcoming 200th anniversary which will be celebrated by various European countries in June in this manner. 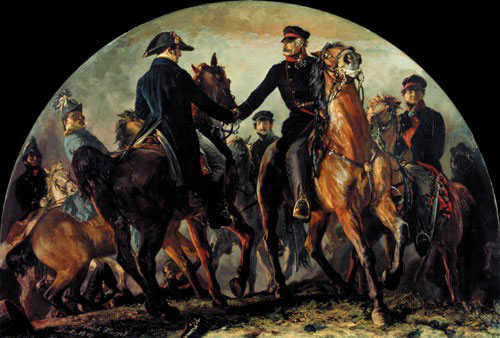 The battlefield of Waterloo, now in Belgian territory after the country emerged from an earlier Dutch unified kingdom in 1830, will be holding national celebrations with a weekend of festivities and re-enactments of one of history’s decisive combats and expects many more visitors to the battlefield near Brussels, where facilities are being renovated. It has been suggested that the French government has opposed the coin’s production on the basis that remembering history may stir deep-seated tensions among neighbors – even 200 years after the fact. The battle of Waterloo essentially ended the Emperor Napoleon’s hopes of total European domination which eventually led not only to his downfall, but those of his brothers and in-laws whom he had placed on various European thrones, those established and those created by him. The victory of the allies also led to Napoleon’s ultimate exile, to the Island of St. Helena.

Coin collectors looking for a coin to mark the bicentenary of this historic European battle need look only over the English Channel as the Royal Mint have produced a £5 crown coin marking the occasion, the coin’s reverse design depicts the Duke of Wellington along with the Prussian General Gebhard Leberecht von Blücher meeting on the Waterloo battlefield. Criticism has been lodged at France in much of the European media who last year produced their own €2 marking the 70th anniversary of the Normandy landings which eventually led to the downfall of Nazi German occupation.

Among some of the €2 commemorative coins planned this year do include those from France who are marking the 70th year of peace since the end of the Second World War and there will be a German coin issued to celebrate 25 years of German unification since the collapse of the German Democratic Republic or, East Germany in October 1990.