Pirquet was born in 1874 just outside of Vienna. In 1892, he began studying theology, but abandoned it in favor of medicine. He graduated from Königsberg (Prussia) in 1900 and went to Berlin to attend a course in pediatrics. Upon returning to Vienna, he obtained a position at the St. Anna Children’s Hospital. In 1909, he briefly held a position at John Hopkins University in Baltimore, but returned after only one year to become head of the University Children’s Clinic. 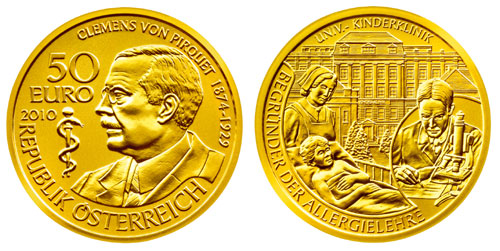 He is best known for his contributions to bacteriology and immunology. When he noticed that some patients had more severe reactions to the small pox vaccination, he and Bela Schick developed the word “allergy,” from the Greek allos meaning “other” and ergon meaning “reaction.”

The 50 Euro gold coin features a profile portrait of Clemens von Pirquet with the staff Aesculapius. The reverse features a scene of a nurse with a sick child at the University Children’s Clinic. An inset depicts Dr. Pirquet with a microscope engaged in research. An inscription reads: “Begründer der Allergielehre” (Founder of the science of allergies).

Each coin is struck in .986 fine gold in proof quality. The maximum mintage is set at 50,000 pieces worldwide. Each coin comes in a display box with numbered certificate of authenticity.