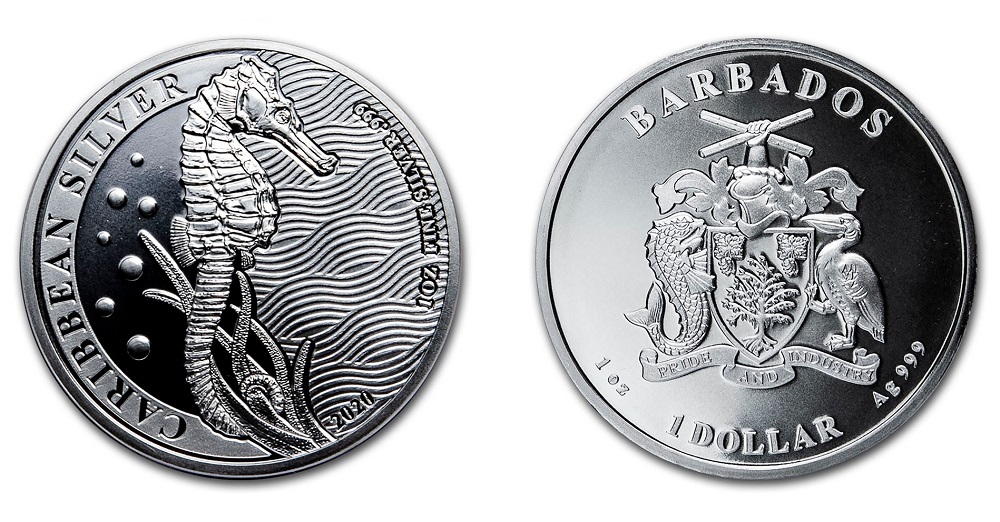 The Central Bank of Barbados has released their 2020-dated Caribbean Silver Seahorse one-ounce bullion coins. Begun in 2018, the series focuses on the seahorse as its theme, while the 2020-dated coins depict a new design from the two previous releases. One of the most fascinating and distinct fishes in the ocean, seahorses are truly unique, and not just because of their unusual equine shape — which is where their name derives. 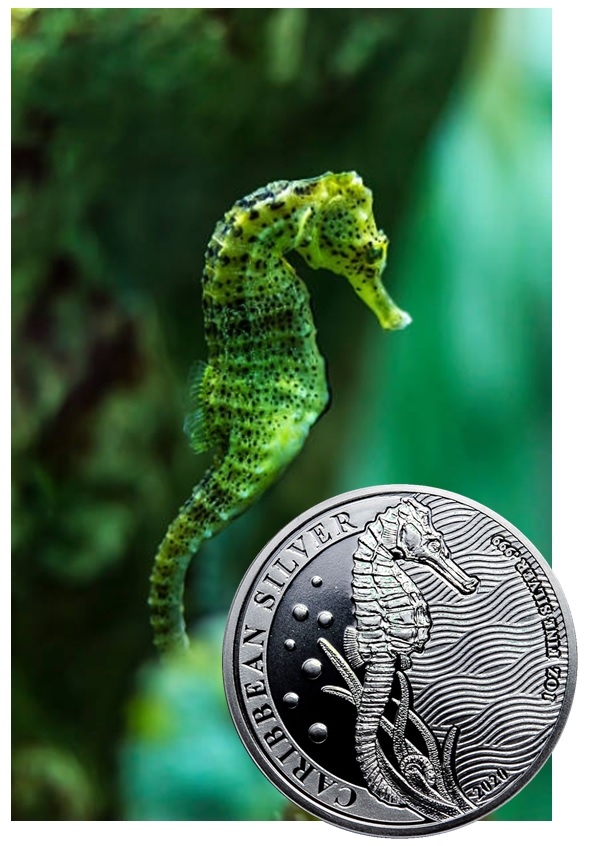 Searching for mates can be difficult and risky since seahorses since they do not swim as fast as their predators and need to rely on camouflage to hide from them. Unlike most other fish, seahorses are known to favour monogamous pairings and mate for life. Rarer still, they are among the only animal species on Earth in which the male bears the unborn young. This is achieved when a female seahorse lays dozens, sometimes hundreds, of eggs in a pouch on the male seahorse’s abdomen. This anatomy is called a brood pouch and resembles a kangaroo’s pouch for carrying young. Seahorse young will hatch and emerge after up to 45 days in the brood pouch.

The gold and silver coins are produced by the Scotsdale Mint at their facilities in Arizona, on behalf of the Central Bank of Barbados. The obverse side features a full image of a seahorse facing right with its tail wrapped around part of a plant in the ocean. In the background are graphics representing the waves of the ocean and air bubbles formed by the wildlife in the sea. The name of the coin, CARIBBEAN SILVER, is seen to the left of the primary design. The purity and year of issue are shown along the lower edge of the coin. The reverse side displays the Barbadian coat of arms, which includes the golden shield along with two pride of Barbados flowers, the national flower, and the bearded fig tree, Ficus citrifolia. Above the shield is a helmet and mantling, and on a wreath is the arm and hand of a Bajan holding two crossed pieces of sugar cane, symbolic of Barbados’ sugar industry. The coat of arms carries the motto Pride and Industry.

The silver coins are available as a separate item, in multiples of 10 or 20 pieces, which are delivered in a protective tube packaging. For additional information, please check with your usual bullion dealer/broker in your area, as the Central Bank of Barbados does not sell directly to the public.

Cambodia: National Bank unveils plan to limit use of $1, $2, and $5, U.S. dollar banknotes from domestic transactions