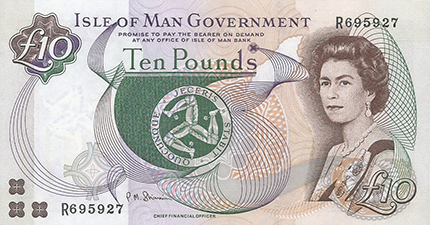 Isle of Man is an island located in the Irish Sea between England and Northern Ireland, both part of the United Kingdom. A self-governing Crown dependency, its capital is Douglas, and the island has a population of roughly 85,000 people. Known to the Romans, the island had been populated for thousands of years by then, and the island has been under English control since at least the 14th century. Since the middle of the 19th century the island has enjoyed some form of self-government.  The first banknotes denominated in Manx Pounds were issued by the Isle of Man Banking Company, and prior to 1961 a total of 10 private banks had issued £1 banknotes for circulation on the Isle of Man. On July 31, 1961, however, the government revoked the banks’ licenses to issue banknotes, shortly after the Isle of Man government started to issue its first banknotes. This article will deal with those notes, which continue to be issued to this day. 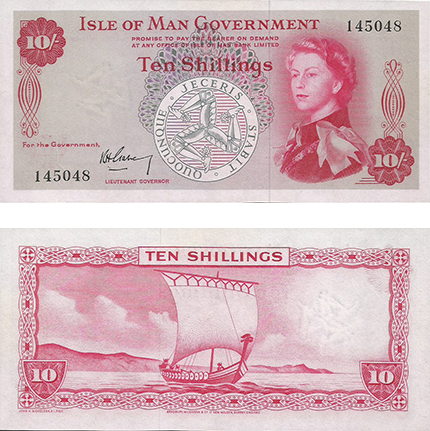 The first issue, introduced on July 3, 1961, consisted of three denominations: 10/- Shillings (Pick 24), £1 (Pick 25), and £5 (Pick 26). The notes were (and are) tied to the British Pound at Par, and British Pounds are also accepted on the island. The front of all three denominations featured the famous portrait of Queen Elizabeth II based on a painting by Pietro Annigoni. In the center of all three denominations is the triskellion, a symbol of three conjoined legs that is of uncertain origin but has been used as a symbol for the island for many centuries. Primary colors are red for the 10/- Shillings (which has a Viking ship on the back), purple for the 1 Pound (which has a Tynwald Hill scene on the back), and blue/green for the 5 Pounds (which has a view of Rushen Castle on the back). 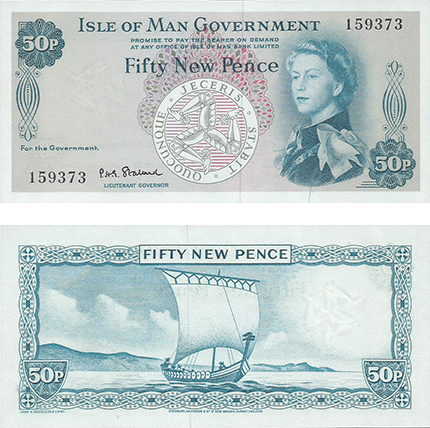 50 New Pence of the ND (1969) issue. This was a relatively short-lived issue with the Annigoni portrait of Queen Elizabeth II.

Initial issues featured the signature of Ronald Garvey as lieutenant governor (he served until 1967). The first printings had no prefix letter, while later issues of the two lowest denominations had prefixes A (10/- Shillings and 1 Pound) and B, C (1 Pound only). In 1967 a new signature appeared, that of Peter Stallard, but the notes remained identical otherwise. The first major change in the series occurred in 1969, when the 10/- Shilling note was replaced by a 50 Pence note of identical design, but in blue instead of red (Pick-27). This occurred in preparation for the decimalization of the British Pound, which occurred in 1971 and changed the currency system from one in which £1 consisted of 100 Pence instead of 20 Shillings or 240 Pence as it had previously. 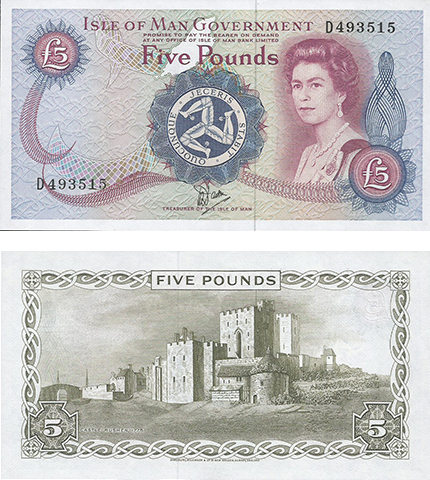 In 1972 a redesigned series was introduced, which would remain to be printed (with slight variances in text and signatures) until the early 1990s. A more mature portrait of the monarch by Anthony Buckley replaced the Annigoni portrait of Queen Elizabeth II. The most significant changes in the design were done to the £5 note, which introduced an entirely new color scheme that was predominantly purple and blue. Design for the backs remained the same as for the previous series. The £10, which was new for the series (Pick-36), was printed with the front in predominantly brown, green, and violet colors, while the back features Peel Castle as it appeared circa 1830. In 1979 yet another denomination was introduced, the £20 note (Pick-37), which is predominantly red-orange and features Laxey Wheel (the largest working waterwheel in the world) during its inauguration in 1854. The first 5,000 notes of this new denomination were released as commemoratives (Pick-32), with a small black overprint on the front (“Issued During Millennium Year 1979”), commemorating the 1,000th anniversary of the island’s parliament, Tynwald. 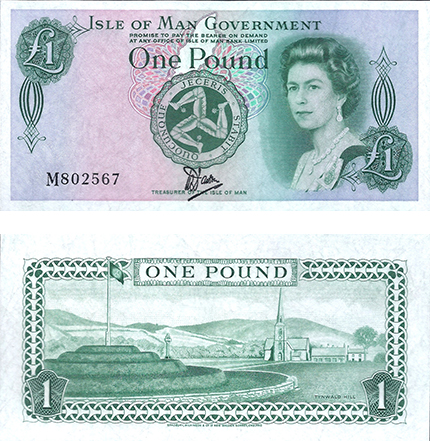 Printed on Bradvek, this 1 Pound note from the Isle of Man was one of the first experiments with polymer-related banknotes.

In 1983 two new issues were introduced. The first is a £1 note (Pick-38) that is of virtually identical design as that of the previous issue, but printed on Bradvek, a polymer substrate that has been used only on this particular issue, and is regarded as one of the earliest experiments with polymer (plastic) banknotes. The second is the only £50 note of the island (Pick-39), which reportedly is still issued, albeit rarely used. Predominantly blue, green, and violet, it features an 1841 scene at Douglas Bay on the back. The portrait on the front of the £50 note, based on a photograph by Peter Grugeon, is a more mature portrait of the Queen than the lower denominations of this series. 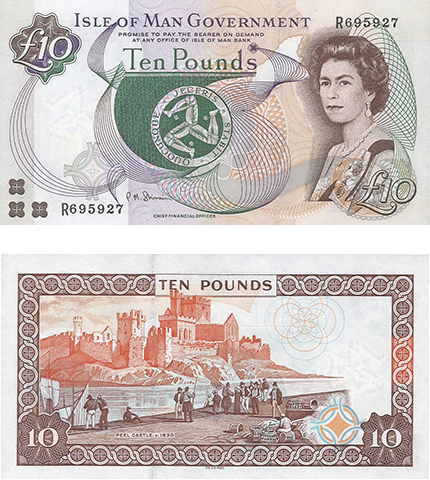 Introduced in the early 1990s, this more modern-looking 10 Pound continues to circulate on the Isle of Man to this day.

The current series of the Isle of Man was introduced in 1990, and features similar designs as the previous issue, except printed in a smaller size. The portrait of Queen Elizabeth II remained the same, but slight changes were made in colors and other design elements, giving the notes a somewhat more modern appearance. Other small design changes were also made—for example, on the £20 note, which added a small outline of the island on the front. The £1 note (Pick-40) remained purple, while colors of the £5 note (Pick-41) were changed to purple, blue, and green. The £10 note (Pick-42 and Pick-44) changed the least, with the predominant colors remaining brown, green, and violet. Finally, the £20 note (Pick-43 and Pick-45) changed to a lighter reddish-brown, orange, and purple.


While the design of banknotes from the Isle of Man have remained largely the same since the early 1970s, there are still quite a few different varieties to be collected. Some are rather difficult to find, and demand for certain varieties can be high. For example, the first £5 note in uncirculated condition is quite scarce, especially with the Garvey signature (Pick-26a). Also difficult to locate, particularly in uncirculated condition, is the first £10 note from 1972 with Stallard signature and no prefix letter. Those with later signatures are more easily acquired, but remain scarce. The £20 commemorative from 1979 is scarce (with only 5,000 notes issued), but the regular issue without overprint is even more difficult to find in uncirculated condition. It seems that people at the time put away the commemoratives, not realizing that the regular issue (which mostly went into circulation) would become very scarce and difficult to find.

A basic design set, which would consist of 15 notes, is put together quite easily and would provide a comprehensive overview of banknotes from the country. A dedicated collector could then continue to collect the various signatures, and once that goal is achieved, even continue to collect all various prefix letters. There is, however, one banknote that would prevent most collectors from obtaining a complete collection of the Isle of Man. The £10 of the 1979 issue and Dawson signature (Pick-36) comes with both A (Pick-36b) and B (Pick-36c) prefix. While the A prefix is scarce but can be found, the B prefix is considered the key banknote for the country. 1,000,000 of these notes were printed, but only 10,000 were released into circulation after Dawson had already resigned from office (but before the new issue with Cashen signature could be released). The rest were destroyed, and it seems that any that made it back to the banks were withdrawn as well. To this day this remains an extremely rare banknote, with just three circulated examples reported to exist, all of which appear to have been found in circulation by pure chance. ❑
Share: