The historic Winchester Cathedral, final resting place of Jane Austen, who is remembered for such classic novels as Sense and Sensibility, Pride and Prejudice, and Emma. (Banknote images courtesy of the Bank of England; event photos © 2017 Michael Alexander)

The Bank of England unveiled the second banknote in the latest “G” series with their new £10 Jane Austen note yesterday (18th July). The bank hosted the unveiling at the historic Winchester Cathedral, the resting place of the famed author. The unveiling was appropriately timed to coincide with the 200th anniversary of her untimely death on the 18th July 1817.

Officiating at the unveiling today was the Right Reverend Catherine Ogle, Dean of Winchester, who spoke of the honour which Winchester Cathedral has as the final resting place of one of the most distinguished women writers of her time. Dean Ogle addressed not only the invited media and guests of the Bank of England, but also an additional 500 Jane Austen enthusiasts who obtained tickets to attend the unveiling and to honour their literary heroine. With Dean Ogle’s comments concluded, she introduced the Bank of England’s governor, Mark Carney, who reminded the audience that banknotes serve as repositories of the country’s collective memory, promoting awareness of the United Kingdom’s glorious history and highlighting the contributions of its greatest citizens. He also commented, “The new £10 note celebrates Jane Austen’s work. Austen’s novels have a universal appeal and speak as powerfully today as they did when they were first published.” 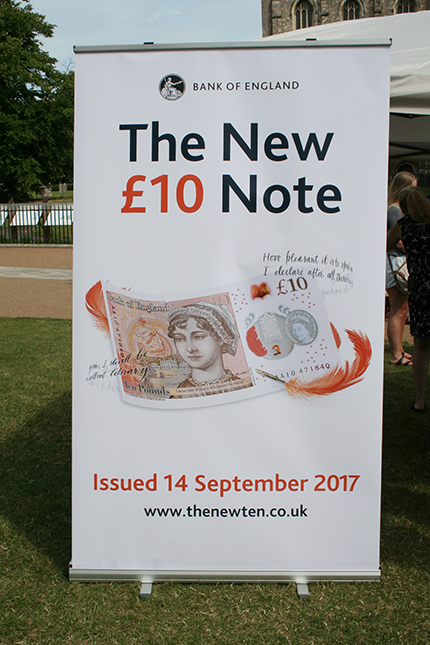 The new £10 Austen banknote takes centre stage with the public, who have the chance to become familiar with the new Austen £10 polymer banknote.

Governor Carney introduced a video which not only highlighted the new design—thus unveiling the latest banknote in the “G” series—but emphasised the note’s new security features, including the addition of tactile or raised dots in the upper left corner to aid visually impaired persons to easily identify the note. As with the “G” series £5 note, the new £10 note is 15% smaller than the Darwin “E” series banknote currently in circulation. With the video finished, the governor even fielded some questions from members of the public, which ranged from the process of choosing a person to be included on banknotes to where the polymer substrate itself was manufactured and whether the banknote was a wholly British-made product. 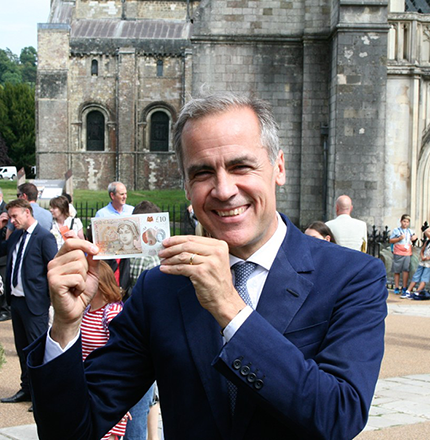 Governor Mark Carney proudly shows off the Bank of England’s latest £10 banknote featuring author Jane Austen, which was unveiled in Winchester on the occasion of the 200th anniversary of the famed 19th-century author’s death.

With the presentation concluded, guests, media, and members of the public were invited outside and in front of the cathedral for an opportunity to inspect the note close-up and also photograph the new £10 Austen note with the governor; the chief cashier, Victoria Cleland (whose signature appears on the banknotes); and the lord mayor, Chancellor David McLean, the 818th mayor of Winchester, who was invited to the presentation. On hand were also a group of Jane Austen look-alikes who were dressed in period costume to resemble their favourite 19th-century woman author as tribute. 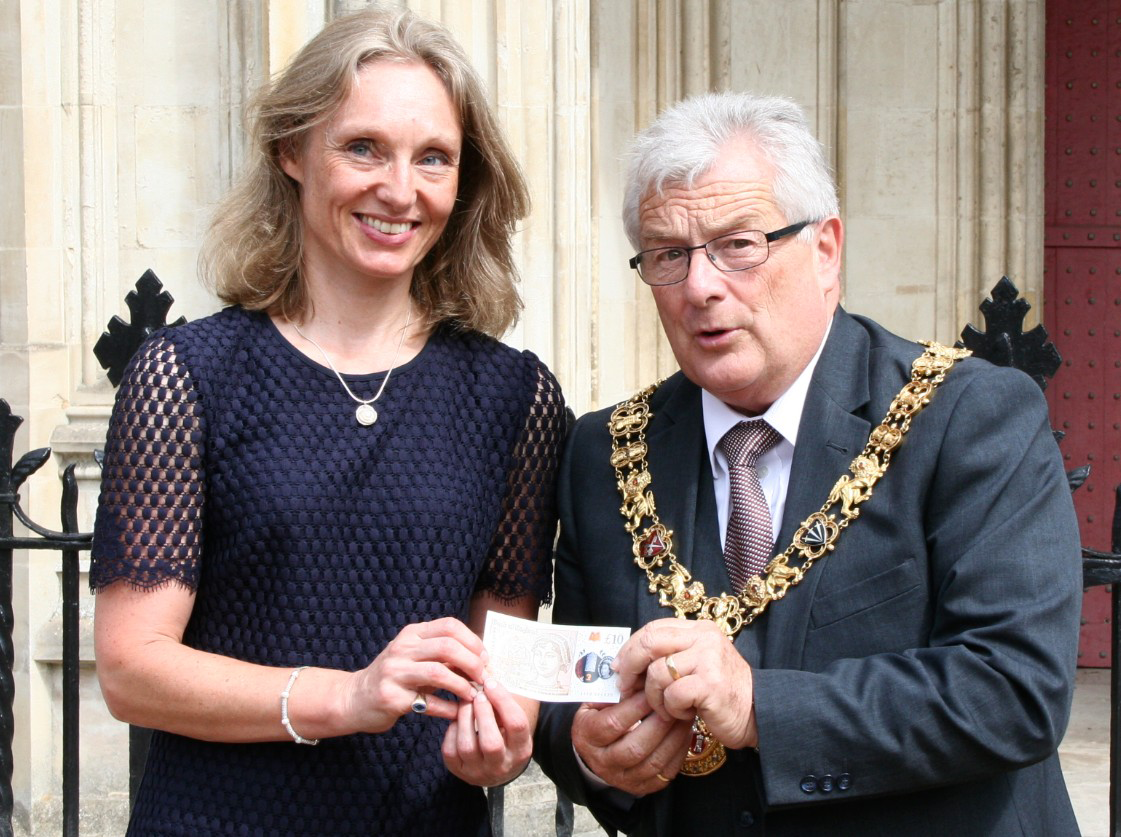 As part of the design, the banknote incorporates a “window” element and a representation of Winchester Cathedral, shown in gold foil on the front of the note and silver on the back. A quill is seen at the side of the window which changes from purple to orange. An image of HM Queen Elizabeth II is also included in the field usually reserved for a watermark on paper banknotes. In the case of the new polymer note, the image is easily seen without holding the note up to a source of light. A hologram is positioned above the window, which includes a rendition of the Queen’s coronation crown. Below the window, a hologram shape of an open book alternates with the words Ten Pounds.

A portrait—attributed to an original engraving by William Home Lizars that was commissioned by her family and based upon an original sketch of Jane Austen drawn by her sister, Cassandra Austen—is the primary design on the reverse. Below the portrait is this quotation:

I declare after all there is no enjoyment like reading!

Behind Austen’s portrait is the image of Godmersham Park, which was home of Edward Austen Knight, Jane’s brother. It was a house she visited often, and is believed to be the inspiration for a number of her novels. Jane Austen’s writing table—the central design, which is placed in the background—was inspired by the 12-sided writing table, and writing quills, used by Jane Austen at Chawton Cottage.

In July 2013, newly appointed Bank of England governor Mark Carney personally officiated during the announcement of a new Bank of England £10 note, with the further announcement that the design would feature 19th-century author Jane Austen. The announcement was hastened by a signed petition brought to the Bank of England on the news that prison reformist Elizabeth Fry would be removed from the £5 banknote denomination in order to make room for Churchill’s likeness in 2016. The petition wanted to bring attention to the new change, which meant that no British women would be represented on the country’s currency (with the exception of Her Majesty who has appeared on the obverse of all Bank of England banknotes since 1960).


Governor Carney has taken a special interest in Bank of England banknotes. He is believed to have spearheaded their transition from paper to polymer, a move similar to one he made while governor of the Bank of Canada with notable success. Committed to a more equitable approach to representation on British banknotes, Mr. Carney started discussions about female representation on banknotes on his first day in office.

The new £10 Austen banknotes will begin circulating on the 14th September. It was also confirmed that the next £20 banknote, which is to feature artist J.M.W. Turner, is due to be issued by 2020 and also to be printed on polymer. There are no immediate plans to replace the current £50 note, which was released in 2011 and is printed on paper.

The Lady of the Moment—Jane Austen 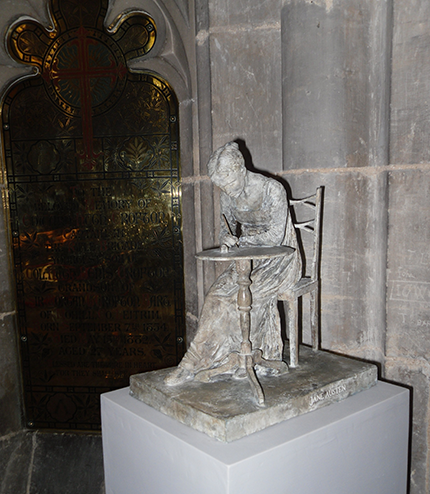 A sculpture is part of the display of the works of Jane Austen. In it, she is seen at the 12-sided writing table—now included on the reverse of the new £10 banknote.

While Austen received some accolades for her works while still alive, with her first three novels garnering critical attention and increasing financial reward, it was not until after her death that her brother Henry revealed to the public that she was an author. Today, Austen is considered one of the greatest writers in English history, and it is because of these accomplishments that she has the distinction of appearing on a British banknote for the first time.

Austen was Georgian-era writer, at a time when very few women could be called authors. Austen’s work was best known for her social commentary, in novels including Sense and Sensibility, Pride and Prejudice, and Emma. While she was not widely known in her own time, her reputation increased rapidly during the early part of the 20th century. She was born in 1775 as the seventh child and second daughter of Cassandra and George Austen, who was an Oxford-educated rector for a nearby Anglican parish. As a result of George Austen’s background, his children grew up in an environment that stressed learning and creative thinking. 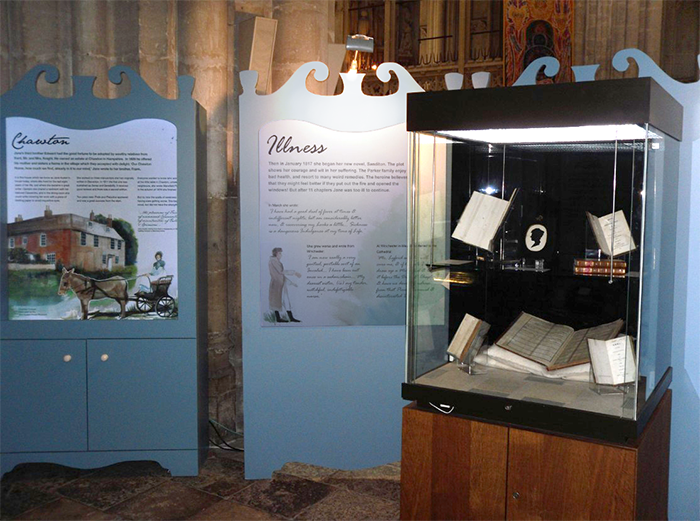 A display of the works of Jane Austen is set up in Winchester Cathedral this year to mark the 200th anniversary of the author’s death.

In 1801, Jane moved to Bath with her father, mother, and her sister Cassandra, but in 1805, her father unexpectedly died after a short illness. As a result, the three women found themselves in a financial crisis. It would not be until 1809 that they would settle into a stable living situation, when the women found themselves living in Jane’s brother Edward’s cottage in Chawton. Jane, by this time in her 30’s, began to anonymously publish her works. In the period spanning 1811 to 1816, she published under a pseudonym Sense and Sensibility, Pride and Prejudice (a work she once referred to as her “darling child”), Mansfield Park, and Emma.

In 1816, at the age of 41, Jane herself began to succumb to an illness that some say may have been Addison’s disease. Despite her failing health, she made impressive efforts to continue working at a normal pace, editing older works as well as starting a new novel. Its working title was The Brothers, and it was published along with another novel, entitled Persuasion, both posthumously. Eventually her health deteriorated to such a degree that she ceased writing altogether. She died on the 18th July 1817 and was buried in the church cemetery at Winchester Cathedral in Hampshire, England.   ❑