The Bank of England have issued (2nd November) their new £50 banknote. This is the second note within the “F” series and only the third contemporary version of this denomination. The note is the first to include the signature of the Bank of England’s Chief Cashier Chris Salmon, in office from April 2011. The new issue is also the first Bank of England note to feature two prominent persons on the reverse design. 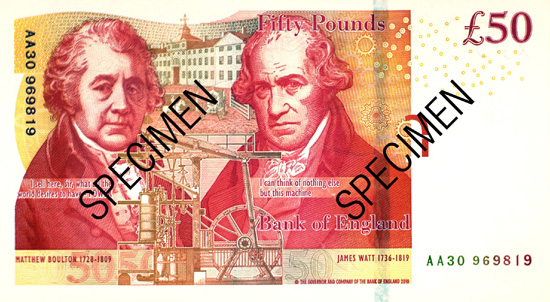 The note features both Matthew Boulton (1728 – 1809) and James Watt (1736 – 1819) two prominent industrialists / inventors of the 18th century credited with accelerating the progress of manufacturing steam engines. In addition there are two other illustrations included on the designs. The Whitbread Steam Engine is superimposed between and just below the two portraits and Matthew Boulton’s Soho Manufactory can be seen behind in the background. Their inventions and improvements to this technology helped make a huge contribution to the progress of Britain’s Industrial Revolution. Two sets of serial numbers are located on the reverse with one set appearing vertically beside the portrait of Matthew Bolton. 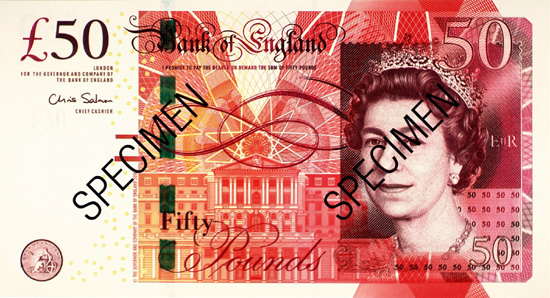 On the obverse, the portrait of HM Queen Elizabeth II in use since 1990, is utilised on this latest series along with a deption of the building of the Bank of England located on Threadneedle Street positioned towards the centre. The new banknote includes the year “2010” on the reverse (the year of copyright) and retains the same dimensions (156 / 86 mm. or 6.14  / 3.38 in.) and a similar colour scheme as the presently circulating  “D” note series introduced in 1994. It is expected that both note types will circulate simultaneously until a date for the “D” series or “Houblon” note is recalled.

Security features include a watermark of the Queen’s image along with the numeral “50” just above her image. A metallic security thread which can be seen clearly when held up to the light, the thread is positioned just to the left of the Queen’s portrait when viewed from the obverse. An aligned printed application of the symbol “£” is found just to the right of the watermark field, when held up to the light on the notes obverse, the symbol is clearly visible. A new “Motion Thread” application is visible from the obverse which includes five green tinted windows woven into the paper along its length containing images of the “£” symbol and the numeral “50”. When the note is tilted from side to side, the images appear to be in motion, moving up and down. When the note is tilted up and down, the images move from side to side and the number 50 and £ symbol switch. Micro-lettering can be seen on the obverse just under the Queen’s portrait with the value of the note written in small letter and numbers.

It is expected that the remaining two denominations of the £5 and £10 notes will be updated and issued within the new “F” series in due course.

(Banknote images are kindly provided to the offices of LBMRC UK by the Media Centre of the Bank of England for the purpose of re-illustration.)