On November 18, 2013, the Bulgarian National Bank issued the latest coin from the Bulgarian Church and Monasteries series featuring the Bachkovo Monastery. Founded in 1083 by Prince Gregory Pakourianos, it is one of the largest and oldest Eastern Orthodox monasteries in Europe.

The obverse design of the coin features a replica of the miraculous Virgin Mary Eleusa icon of the Bachkovo Monastery. To the right side is the logo of the Bulgarian National Bank, the nominal face value of ‘10 ЛЕВА’ (10 levs), the year of issue ‘2013’, and the inscription ‘БЪЛГАРСКА НАРОДНА БАНКА’ (Bulgarian National Bank) in semicircle.

The reverse features a view of the Bachkovo Monastery and the image of two angels with a Virgin Mary icon from the fresco above the monastery gate. The inscriptions read ‘БАЧКОВСКИ МАНАСТИР • УСПЕНИЕ БОГОРОДИЧНО’ (Bachkovo Monastery • The Assumption). 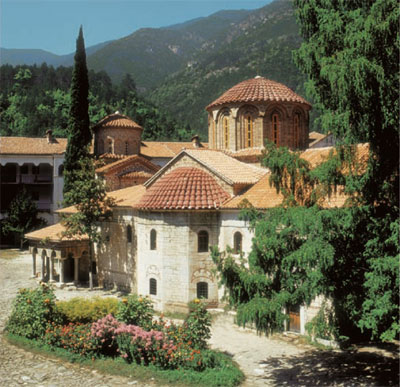 The artistic design of the coin is credited to Evgenia Tsankova and Plamen Chernev.

Each coin is struck in 92.5% silver with a weight of 23.33 grams and diameter of 38.61 mm. The mintage is limited to 3,000 pieces. Coins are available from Bulgarian National Bank cash desks for BGN 66 including VAT.

The previous issue of this silver commemorative coin series featured the Zograf Monastery.