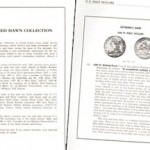 In the first three parts of the story of the Reed Hawn Collection I have described the man and his father, and the pains they took in forming an important collection, which Stack’s was privileged to auction. During the post World War II period many collections were formed differently than they are today. First of […]

The extent of varieties and completeness of the Reed Hawn Collection show that man’s dedication. Reed Hawn dedicated himself to specialization, as with his half dollar collection, 1794 to 1947 as described in the previous part of this article. But, he was also interested in other series that were easier to complete. During the 1960s […]

During the middle of the 20th century, due to the aging of collectors who had collected prior to the 1950s, a major group of outstanding collections became available at public auction or by private sale. Most of the collections included coins from collections that were formed in the late 19th century and up to the […]