The Mint of Austria has launched their first “2012” dated collector coin. The new 5 Euro coin marks the 200th anniversary of the “Society of Music Friends” or “Musikverein” in Vienna.  It started as a small group of friends of music which grew rapidly and soon had its own concert hall.  Prior to building the performance hall they currently own, the Musikverein used a small hall that seated only 700 listeners. It was much too small to satisfy the demand from the public who wanted to enjoy great music on a regular basis.

This new coin also marks Austrian Mint’s return to utilizing the classic metal of copper. Used for many centuries around the world, pure copper was the choice of many minters because it was so pliable and allowed for intricate design details and deep relief. Copper will now be used for the circulation versions of both the 5 and 10 euro circulation coin series from Austria, starting with the 2012 dated issues. 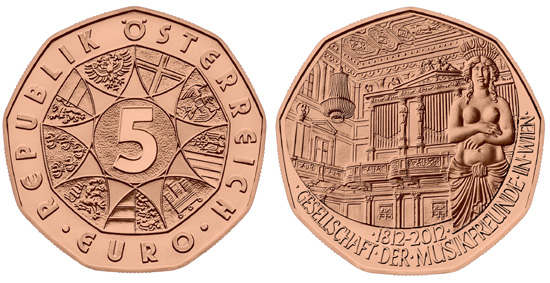 The obverse of the nine-sided coin is the standard 5 euro design, with the denomination encircled by the shields of the nine federal provinces of Austria.  In the center is the face value of 5 euros.  The obverse was designed by mint engraver Helmut Andexlinger.

The reverse design, which is the same for both the copper and silver versions, features the Musikverein’s main concert hall, the Golden Hall and its impressive organ. The design by the Mint’s Chief engraver Thomas Pesendorfer (who is also the designer of the Vienna Philharmonic bullion coins issued since 1989) highlights the intricate details found in the Golden Hall.  Most famous of these are the caryatids, the female draped figures which seem to carry the weight of the magnificent building on their heads. In the upper background is a portion of the complex faceted ceiling with frescoes.  The immense pipes of the famous organ are depicted in the design. 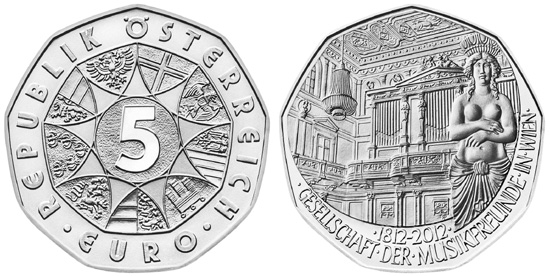 The silver coin is struck in .800 fine silver with a weight of 10 grams and a diameter for both versions of 28.5 mm. The silver & copper 2012 dated coins will be available on the 14th December 2011. The copper coins are struck in uncirculated quality with a mintage of 300,000 pieces. They will be made available through commercial banks in Austria.  The silver versions, also struck in a special or FDC uncirculated quality are limited to 50,000 pieces will be available from the usual outlets for Austrian commemorative coins.

For more information on this and other coins offered by the Mint of Austria, please visit their website at: https://www.muenzeoesterreich.at/eng