The Austrian Mint has released the third coin in the €10 silver commemorative coin series “Tales and Legends in Austria.” The latest coin recalls the folktale explaining the discovery of the iron ore mountain in Styria known as the Erzberg. 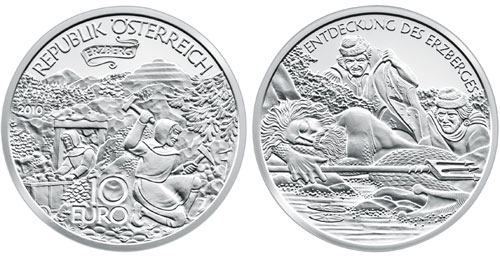 According to the folktale, local inhabitants discovered a water sprite living in an underwater grotto in Lake Leopoldstein. Believing that the sprite possesed great treasure, they were determined to capture him. Meat and wine were placed at the waterside, which the water sprite ate and drank, and then fell asleep. Two villagers crept up to his sleeping figure and raveled him up in a tar covered coat to prevent him from slipping from their grasp.

The villagers carried the water sprite back to the village, where he promised great riches in exchange for his freedom. He said, “Gold will last but a short time, silver not long either, but iron will last you forever.” After the villagers responded that they wanted the iron. The sprite said, “This mountain will supply you with iron forever more,” as he pointed to Erzberg.

One side of the silver commemorative coin depicts the scene from the folktale where the two villagers are sneaking up on the sleeping water sprite with a tar covered coat. The other side depicts a scene of iron ore mining during the Middle Ages with the distinctive iron mountain Erzberg in the background.

The €10 silver coins are struck in 92.5% fine silver and were first released on April 14, 2010. The maximum mintages are 40,000 pieces in proof, 30,000 pieces in special uncirculated quality, and 130,000 in circulation quality issued at face value though banks. The proof version is packaged in a box with a numbered certificate of authenticity. The uncirculated version is packaged in a colorful blister pack.