The Austrian Mint has recently revealed their coin release schedule for the coming year. The 2010 Issuing Program includes coin releases for ongoing series such as the silver/niobium series and the “Tales and Legends of Austria.” The coming year will also feature releases for a new 20 Euro coin series named “Rome on the Danube.”

January – The year starts out with the release of two 5 euro commemorative silver coins, struck to celebrate the 2010 Winter Games held in Vancouver, Canada. The coins will commemorate the sports of Ski-jump and Snowboard and will be available in Uncirculated (mintage 225,000 each) and Special Uncirculated (50,000 each). 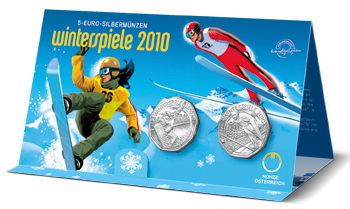 February – Continuing the 50 euro gold proof series “Celebrated Physicians of Austria” is a coin honoring Karl Landsteiner, noted for his development in 1901 of the modern system of classification of blood groups from his identification of the presence of agglutinins in the blood. He received the Nobel Prize in Physiology or Medicine in 1930.

March -This month will include the next release in the widely popular Silver/Niobium series of commemorative coins, dedicated to “Renewable Energy”. The 25 euro coins in this series have grown in appeal since their initial release in 2003 to be one of the Austrian Mint’s most popular products.

April – This month will include the release of the next coin in the “Tales and Legends of Austria” silver series, which began in 2009. The 10 euro coins of the series are issued in Uncirculated, Brilliant Uncirculated and Proof quality, with a coin for every budget. The first of two designs for the series to be released in 2010 is dedicated to the Erzberg, also known as the Ennstaler Alps, in Styria.

May – Taking the place of the successful “Austrian Railways” series is a new run of 20 euro coins named “Rome on the Danube”. These coins commemorate various towns located in Austria along the famous Danube river that were established during the time of the Roman Empire. Claudium Virunum was a Roman city in the province of Noricum, on today’s Zollfeld in the Austrian State of Carinthia.

June – The first of the Austrian coin sets are scheduled to be released in June, and as is tradition in previous years, the release of the second of the year’s 5 euro coinage will be available on the same day. The mint set for 2010 will include all 8 circulating coins from Austria, struck in brilliant uncirculated quality and housed in a full-colour informative coin folder. The 5 euro commemorative will honor the 75th anniversary of the famous Grossglockner High Alpine Road, that connects the state of Salzburg with the state of Carinthia. Named after the Großglockner, Austria’s highest mountain, the road is panoramic and features many sharp curves through the mountain side, producing spectacular views of the ranges.

September – This month will include the second release for the “Rome on the Danube” silver coin series. This coin commemorates Vindobona, originally a Celtic settlement before becoming a Roman military camp, situated at the site of modern day Vienna. The town is known for being the place where Marcus Aurelius died in the year 180.

October – The second “Tales and Legends of Austria” silver coin release for 2010 will take place this month. The coin is dedicated to the story of Charlemange (Emperor Karl, Charles the Great) in the Untersberg Mountains. October also sees the highly regarded Austrian proof set of coins issued for 2010, containing all 8 circulating coins of Austria struck in proof quality.

November – The final issue for the year will be the third in the stunningly detailed gold proof series paying tribute to the Crowns of the House of Hapsburg, with the Hungarian Crown of St Stephen being recreated in stunning 98.6% gold.