The Austrian Mint has released the second coin in the “Rome on the Danube” silver coin series, featuring “Vindobona” or Vienna in the Roman Empire. The new series features towns and cities located along the River Danbue  in present day Austria  that were established during the time of the Roman Empire. 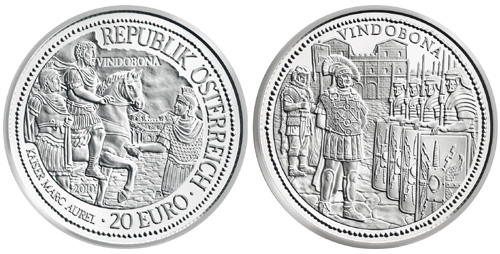 Originally a Celtic settlement, a Roman fortress was constructed at Vindobona to strengthen the border defenses along the Danube. A civilian town of traders and artisans sprang in the protective shadow of the fortress. According to tradition, the famous emperor and philosopher Marcus Aurelius died in Vindobona in the year 180. The emperor Septimius Serverus is believed to have given Vindonona the status of Roman city in 202.

The obverse of the coin, based on an ancient marble relief, depicts Marcus Aurelius on horseback  within the fortress of Vindobona. An officer stands beside him, while another hands him a scroll. The double gates and protective towers of the fortress are visible in the background of the scene. The reverse depicts a centurion inspecting soldiers of his centuria aligned on the main road of the fortress.

Each Vindobona coin is struck in 90% fine silver and carries a nominal face value of 20 Euros. The coins are available exclusively in proof quality with a maximum mintage of 50,000 pieces.