The Austrian Mint has issued a new coin which highlights some of the European continent’s more interesting and diverse wildlife and habitats.

This coin, with a €100 face value is the first of six coins to be issued over the next six years which will feature some of the most recognizable European wild animals in their habitats. The 2013 issue honors the red deer (cervus elaphus), an animal found in many forests Europe, Russia, Asia and North Africa. A related species is also found in North America, mostly in the west. Fossils indicate that some 12 million years ago the ancestor of today’s deer already roamed parts of the globe. The rack of the modern stag may grow up to 8 feet in its spread. During the spring, their antlers have a soft fur covering. The males weigh on average over 350 pounds while the more delicate female weighs in on average at around 270 pounds. Their distinctive coats, for which they are named, become the most reddish-brown during the summer months. By autumn their coats thicken to protect them from the cold winter temperatures. In spring the coats once again shed and thin out in preparation for the warmth of the summer. 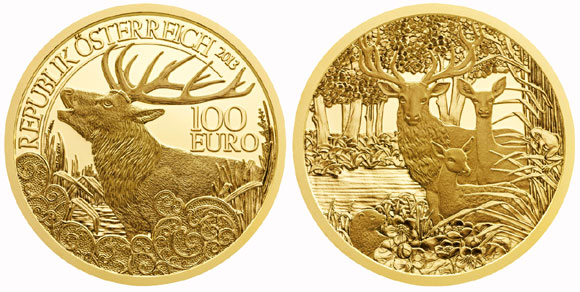 The obverse of the coin, designed and engraved by mint engraver Helmut Andexlinger, depicts a mighty red deer with a rack of 12 points, calling out its presence. The background design includes a marshy area often frequented by deer. In the foreground Helmut added some stylized grasses and sedges highlighting the coin’s 3D effect. Also included is the country of issue, “Republik Oesterreich”, the year “2013” and the face value 100 euros.

The reverse was designed and engraved by the Mint of Austria’s Chief engraver, Thomas Pesendorfer.  He has depicted a family of deer, stag, doe and fawn, posing in a densely wooded forest with a peaceful river in the background. A curious otter and frog look onto the scene. A lovely marsh marigold plant blooms in the foreground.

A wooden collector case is available to house the entire series. The case is adorned with a gracefully minted shield designed and crafted by the mint’s in-house engravers. Each coin is encapsulated and comes in a box with a numbered certificate of authenticity. This six coin series has the following plan of issue:2013 The Red Deer, 2014 The Wild Boar, 2015 The Wood Grouse, 2016 The Fox, 2017 The Alpine Ibex and in 2018 – The Mallard.

For more information on this and other coins available from the Mint of Austria, please visit their website at: http://www.muenzeoesterreich.at/kampagne/wildtiere/series Information offered in German and English, international orders fulfilled.