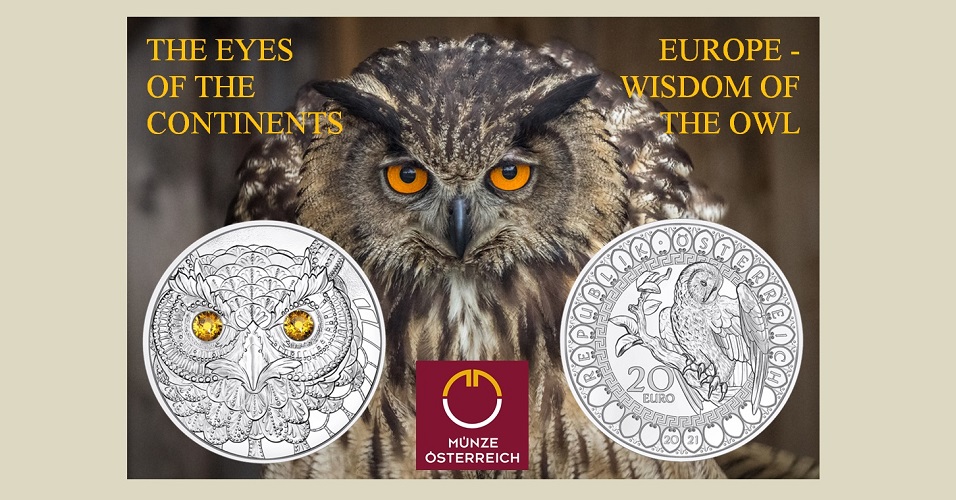 The Austrian Mint has launched the second coin in a series entitled “Eyes of the Continents,” whose main focus involves the introduction of five power animals, all enticing and with captivating eyes seen on many species worldwide. Each animal embodies a different exceptional quality and characteristic for which it was already praised for in the myths and tales of early cultures. The coin series arranges an eye-to-eye experience with such wonderful creatures as snakes, owls, tigers, elephants, and bears. The eye of the respective animal is emblazoned on the reverse side as a faceted crystal complementing the natural colour of the featured animal.

The latest coin highlights Europe and the Wisdom of the Owl, long believed to be the symbol of knowledge and perception from the time of the Ancient Greeks. In mythology, the ancestral place of the owl is at the side of Pallas Athene, one of the 12 Olympian deities who embodies wisdom. Wherever Athena and her Roman counterpart Minerva were, the owl was not far.

Few experiences in nature can be matched as the sight of the penetrating golden-yellow eyes of an owl staring through the pitch darkness. This sensation is brought to the surface of a silver Proof quality coin designed by Austrian Mint artisan Anna Rastl, who, with the help of colour faceted Swarovski crystals, enhances the bird’s already mythical quality.

The obverse side shows a stylised design of the face of an eagle owl that fills the surface in its entirety and appears as a richly decorated item of jewellery. The eyes are decorated with multi-faceted, golden-yellow crystals from the Austrian company Swarovski. The reverse side intricately depicts a barn owl sitting on a branch and centred. From this scouting post, she looks down, patiently and persistently in search of prey. The subject is surrounded by decorations that are reminiscent of the familiar and ancient Greek key ornamental border. The text REPUBLIK OSTERREICH is seen above the primary design with each letter placed in a stylised small feather shape. The denomination 20 EURO is placed just to the lower-left and the year of issue 2021 is placed under the design along the edge.

Available from the 11th November, each encapsulated 20-euro silver coin is presented in a heavy gauge card case with a numbered certificate of authenticity. A custom case designed to include all five coins in the collection is available as a separate purchase which consists of two parts such as a protective slipcase and a storage case, both made of elegant wood, and on both of which is the hint of an eye denoting the focus of the series. The coin insert is decorated with a world map and a compass rose and underneath is dedicated space for all the certificates accompanying the coins.

Additional coins in the series will be:

Third coin, Africa and the elephant. From ancient times the soul of the elephant has been associated with calmness and deliberation.

Fourth coin, Asia and the tiger. Revered for their imposing appearance and charisma, tigers have always been associated with strength and power.

Fifth coin, North America will be represented by the majestic and fearless brown bear, so familiar in the myths and folklore passed down by native peoples in verse for centuries.

For additional information about this series, please visit the website of the Austrian Mint.