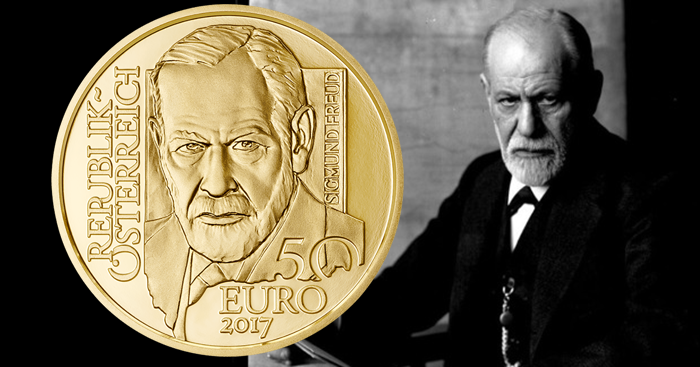 The Mint of Austria have issued (3rd May) a new gold coin that remembers one of the more significant pioneers in the profession of psychology and also launches the first of a three-coin series. Celebrating the pioneering schools of psychotherapy—the scientific discipline established in the Austrian capital in the 20th century—the enlightening three-coin series, Vienna Schools of Psychotherapy, gets underway with the founding father of psychoanalysis, Sigmund Freud. His theories may be the subject of much discussion, but Freud was undoubtedly one of the great thinkers of the 20th century, and his work still resonates some 80 years since his death.

Born into a Jewish family on the 6th May 1856, in the present-day Czech Republic, Freud, a neurologist, set up his clinical practice in Vienna in 1886. Freud was instrumental in developing a technique called “free association,” in which he encouraged his patients to talk freely without interruption or suggestion. He used another technique, known as “transference,” in which he encouraged patients to transfer their feelings from previous relationships onto the relationship with the analyst. Freud made his name as the founder of psychoanalysis, with help from his mentor, Josef Breuer (1842–1925). In 1938, Freud and his family fled Vienna for London to escape the Nazis; he died in London in 1939. Today, many terms attributed to Freud—such as “Oedipus complex,” “super-ego,” and “libido”—live on in our common vernacular as well as in the continued practise of modern psychoanalysis. 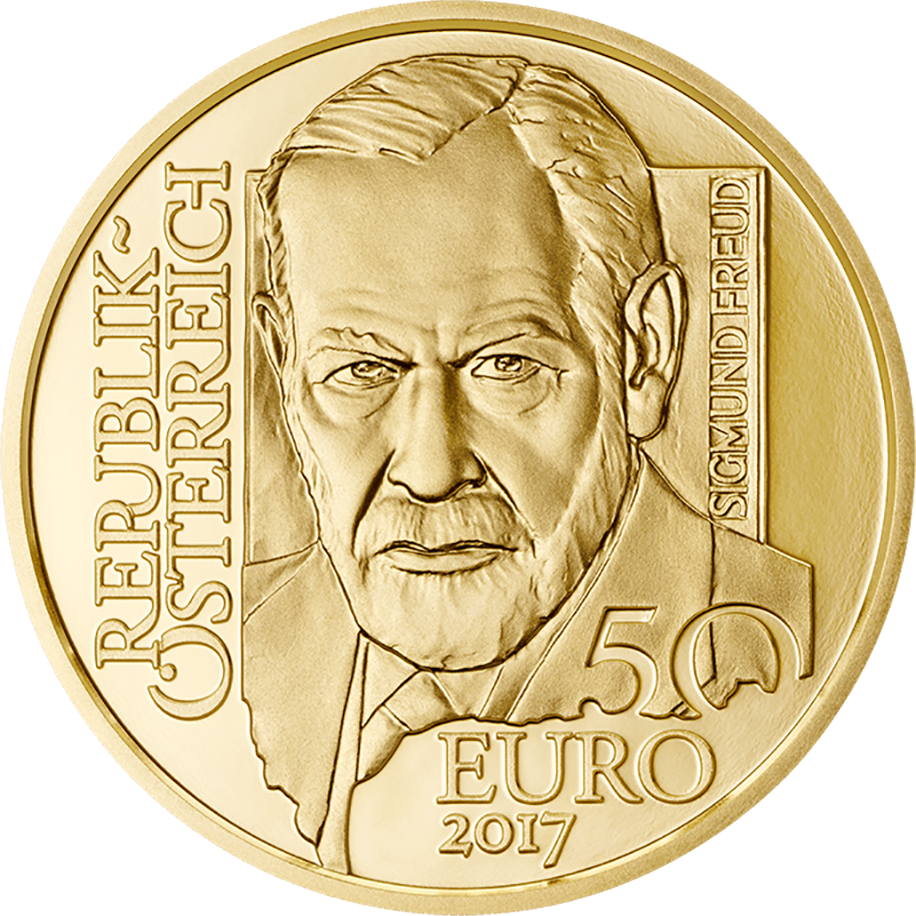 The coin’s design is the work of Helmut Andexlinger and Herbert Wähner, both of whom are resident engravers and artists at the Austrian Mint. The obverse of the coin features one of the more familiar images of Sigmund Freud, from a photograph taken in 1926 by Ferdinand Schmutzer. The text to the left of the portrait reads REPUBLIK OSTERRRICH in two lines positioned vertically. To the right of the portrait is the text SIGMUND FREUD, also positioned vertically, with the denomination of 50 EURO and the year of issue, 2017, placed below the image of Freud. 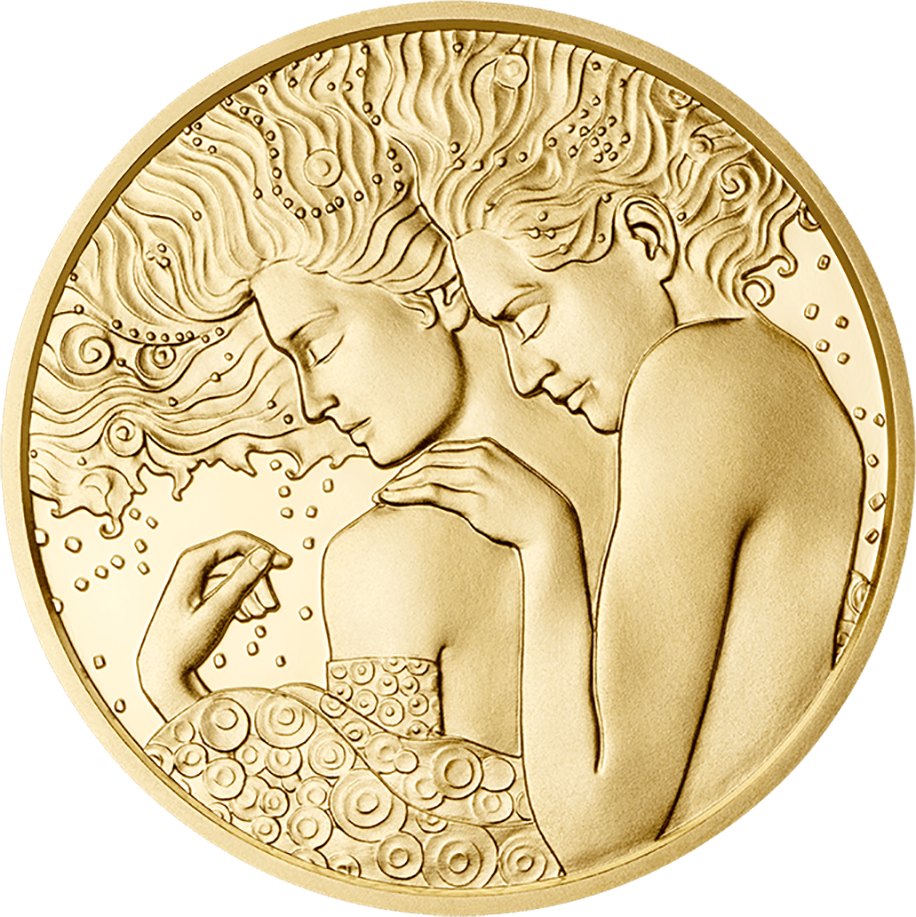 The reverse of the coin illustrates the “will to pleasure,” a central element in Freud’s work. (Editor’s note: The reader may notice a similarity in style to the coins in the Austrian Mint’s series “Gustav Klimt and His Women.” This resemblance may be due to the influence of Helmut Andexlinger, who designed the Klimt series.)

The portrait of Sigmund Freud used on this new coin was last seen on Austria’s 50-schilling banknote from 1986 (shown above), which was in use until the adoption of the euro currency in 2002.The new coin is struck in .986 fine gold—which is normally the fineness used in the minting of ducats. The coin is available as a separate purchase and comes in a case complete with a numbered certificate of authenticity. The series will also issue coins dedicated to Alfred Adler and Viktor Frankl; a custom case to include all three coins in the new series is available. For more information on this and other coins offered by the Mint of Austria, please visit their website. 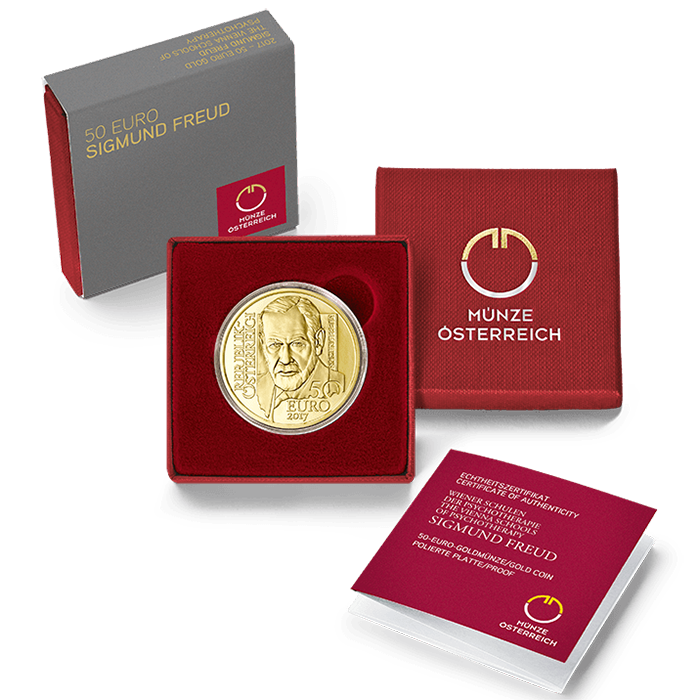 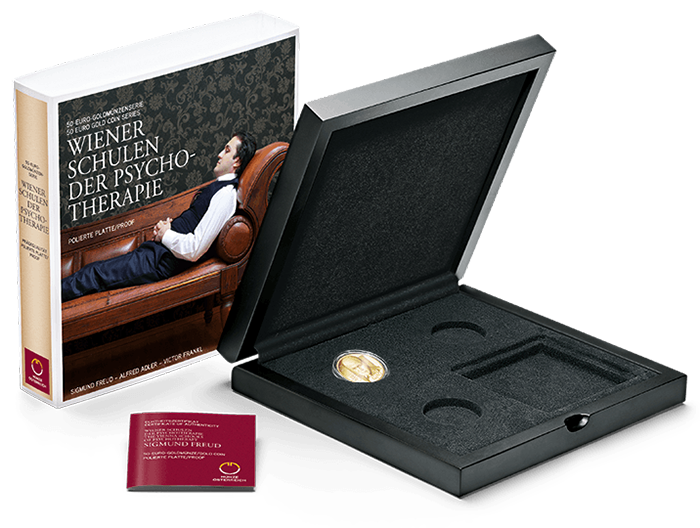 Custom case to hold all three coins in the series.

All born within the former Austro-Hungarian Empire, Sigmund Freud, Alfred Adler, and Viktor Frankl were the founders of the three pioneering schools of psychotherapy to which this fascinating series is dedicated: psychoanalysis, the field established by Freud (1856–1939); individual psychology, established by Adler (1870–1937); and logotherapy, established by Frankl (1905–1997). The men behind these schools feature on the obverses the coins, while the reverses illustrate the core concept of each respective theory. Psychotherapeutic methods and theories have proliferated since the early days, but that might never have happened without the foundations laid by Freud, Adler, and Frankl.   ❑

Coin Update sponsor APMEX carries the gold Sigmund Freud issue and other issues from the Austrian Mint, including the Gustav Klimt series.
Share: