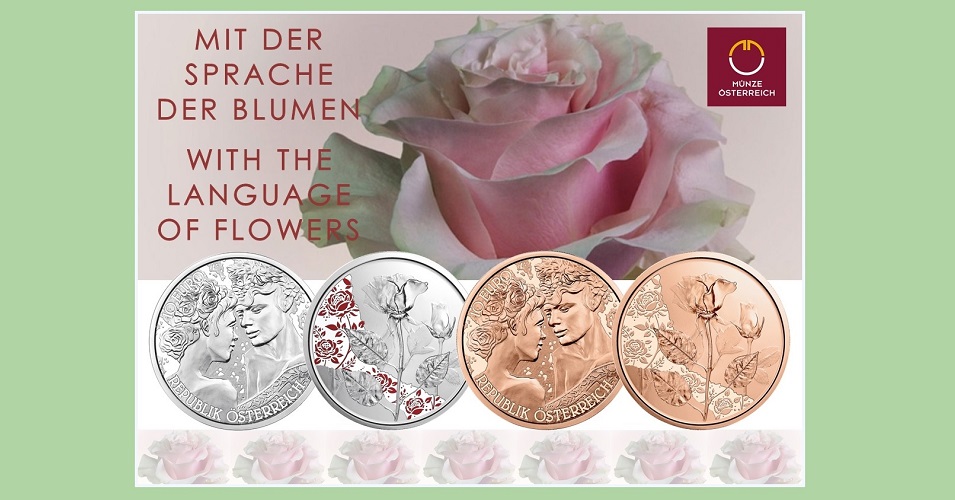 The Austrian Mint has launched an innovative new silver collector coin series that focuses on the language and meaning of floral expression. Entitled “The Language of Flowers,” gifts of flowers have carried a special meaning and mode of communication all their own since ancient times.

The modern catch-phrase “say it with flowers” indeed has its origins since perhaps before recorded history. This age-old custom of offering flowers is the focus of the series that discusses the meanings, folklore, properties, and intended uses of seven well-known flowers. The messages conveyed by the flowers featured in the series can be interpreted as inspirational, and, of course, sentimental. Opening with the rose, six additional coins will be added over the next three years to include the Dandelion, Marigold, Forget-me-Not, Chamomile, Peony, and Violet.

The coins are designed by Helmut Andexlinger, Kathrin Kuntner, and Rebecca Wilding, who utilise an exceptional level of technology and precision that brings a true level of nature to life on the coins. Symbolising love, the coin’s obverse shows a couple gazing intimately and lovingly at each other, both with flowers in their hair. The denomination of 10 EURO and the country REPUBLIK OSTERREICH are also included in the design.

Next to a stylised ornamental background colour pattern of roses, the reverse of the coin features a pair of roses, both of which are imprints of real flowers. Delicately and intricately detailed, an exceptional process to develop the design has never been applied to coins previously. As none of the principal flower images in the series is based on a drawing or illustration, each design actually begins with a real flower grown in a garden. The process is further completed with the flower that is carefully pressed using a special technique that captures every detail in its natural state.

Each Proof coin is encapsulated and presented in a heavy gauge card case complete with a numbered certificate of authenticity and protective slipcase. The Special Uncirculated coins are presented in a blister pack folder with illustrations and informative text. The Uncirculated copper coins are sold at commercial banks and the retail shop of the Austrian Mint for their face value.

Collector Case: “Language of Flowers” collector case provides the perfect display and design in which to present and securely store all seven Proof quality coins in the series along with their respective certificates of authenticity. The case is available in two versions, with and without the companion book.

The “Language of Flowers” Companion book: Do you know which of the seven flowers in the coin series represents telling someone you are thinking of them, an apology for a misdeed or to express your affection in no uncertain terms? You’ll find the answers to these questions and many more in the fascinating companion book to “The Language of Flowers” series and be well-versed in the language of flowers. This extraordinary 100-page publication printed on top-quality reinforced card is illustrated with flowers delicately embossed on the cover.

The series continues next year with the second and third coins featuring the Dandelion and Marigold. Scheduled for 2023 are the Forget-Me-Not and Chamomile. The series will conclude in 2024 with coins issued to feature the Peony and lastly, the Violet.

For additional information about these coins and others in the series, please visit the website of the Austrian Mint.