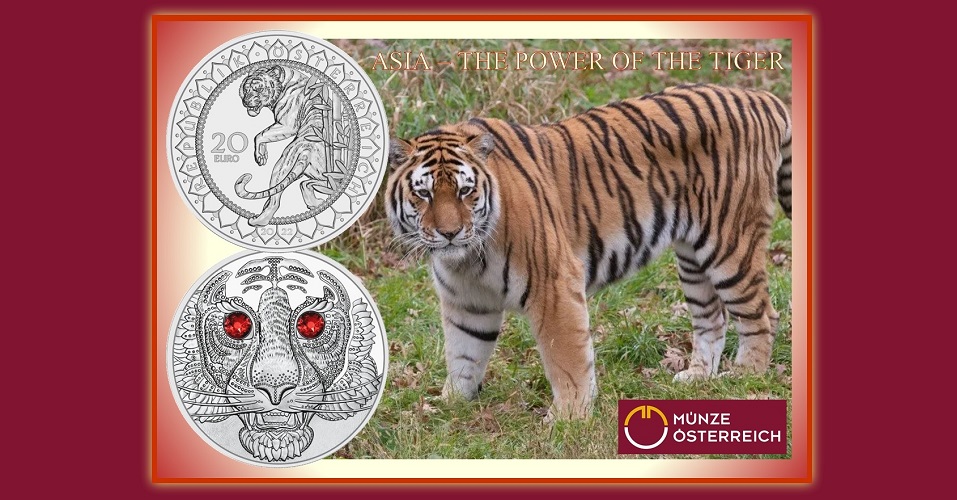 The Austrian Mint has launched their third coin which is part of their ongoing series entitled “Eyes of the World.” Launched last year, the series features various wildlife with particular focus on the eyes of each animal, with the addition of faceted Swarovski crystals, enhancing the animal’s already mythical quality and integrated into the design. The third coin in the series pays attention to the continent of Asia and the tiger, known as the “King of the Animals.”

Designed by Helmut Andexlinger and Anna Rastl, the obverse side depicts a tiger moving through a forest of bamboo. The outer ring of the coin is adorned in the manner of the mandala, the geometric configuration of symbols that possesses magical significance in the rituals of Buddhism and Hinduism. Along the upper portion placed within the mandala shapes are the letters REPUBLIK OSTERREICH. In the same method of design is the year 2022 seen below the primary design. The denomination of 20 EURO is placed to the left of the tiger. The reverse is entirely dominated by the front-facing head of a tiger, and whose markings are ornamented with the associated stripes and, last but not least, its eyes are decorated with finely polished red crystals by Swarovski.

Available from the 19th January, each coin is encapsulated and presented in a heavy gauge card case accompanied by a numbered certificate of authenticity. A custom case made of lacquered hardwood and designed to house all five coins in the series is also available as a separate purchase. For additional information about this coin and other coins in the series, please visit the website of the Austrian Mint.

Austria: New and exciting coin series, “The Magic of Gold”

Austria: Second silver Proof coin in “Eyes of the Continents” series features Europe and the wisdom of the owl