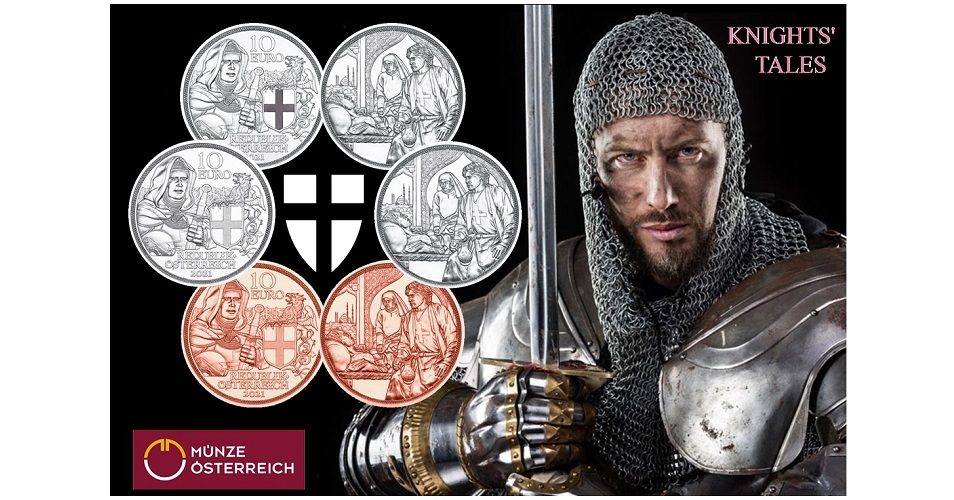 The Austrian Mint has launched (15th March) the last coin, which is part of the five-coin series entitled “Knight’s Tales.” The series focused on the idealised image of the knight and a bygone age of knightly virtues, which still shine brightly today. The series focused on the life of a knight and historical moments, highlighted their journeys of adventure, and discovered the romance of knighthood through the love songs of minstrels.

Designed by Anna Rastl and Kathrin Kuntner, the coin’s reverse depicts a touching and poignant hospital scene in which a nurse tends to a bed-ridden brother as a concerned Teutonic knight looks on. The Proof strikes include a colourised shield of black and white.

On the coin’s obverse is the image of a Teutonic knight holding his sword in one hand and his helmet in the other. To his right, the coat of arms of the Teutonic Order is held by a heraldic gryphon. Above the primary design is the coins’ denomination of 10 EURO and below, REPUBLIK OSTERREICH, along with the year of issue, 2021, all in a stylised text.

The 10-euro coins ”Brotherhood” officially go on sale on Wednesday, 14th April 2021. Each Proof coin is encapsulated and presented in a heavy gauge card case complete with a numbered certificate of authenticity and protective slipcase.

The Brilliant Uncirculated coins are presented in a blister pack folder with illustrations and informative text. The Uncirculated copper coins are sold at banks and the retail shop of the Austrian Mint for their face value. For additional information about these coins and other coins in the series which are still available, please visit the website of the Austrian Mint.

Austria: New and exciting coin series, “The Magic of Gold”