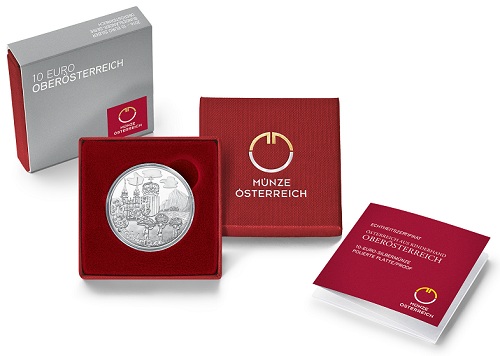 The Mint of Austria has unveiled (19th May) the final design in its innovative series entitled “Austria by its Children,” which consists of ten coins featuring Austrian provinces designed by some of the country’s nine- and ten-year-olds. 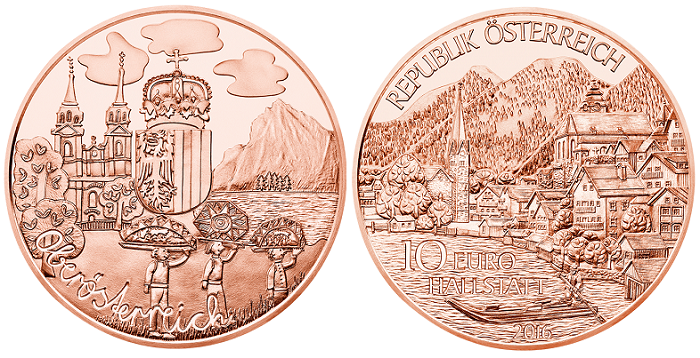 The last coin focuses on the province of Upper Austria, or Oberösterreich in German. It is located in the central-northern part of the country, bordering Germany and the Czech Republic. Upper Austria is the country’s fourth-largest province by area and the third-largest by population; its capital is Linz.

Well known for natural beauty that includes green meadows, beautiful mountains, and clean rivers and streams, Upper Austria is an enticing place to holiday. It is a prime area for all outdoor activities in both winter and summer, including skiing, snowboarding, climbing, horseback riding, and sailing. 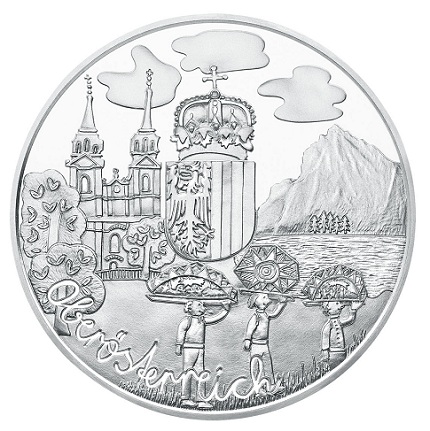 The reverse side of the coin was designed by Klara Baumgartner of Dachseberg School, and engraved by mint engraver Thomnas Pesendorfer. The primary design depicts the church of Linz on Poestling Hill with the coat of arms of the province of Upper Austria in the center, capped by the crown of the former duke of Upper Austria. To the right, three participants of the annual Gloeckler parade wear “Gloeckler” costumes that include elaborately decorated, handmade hats. In the background on the right side is the famous Traunstein Mountain on the edge of the clear blue lake known as Traunsee, located in the Salzkammergut. 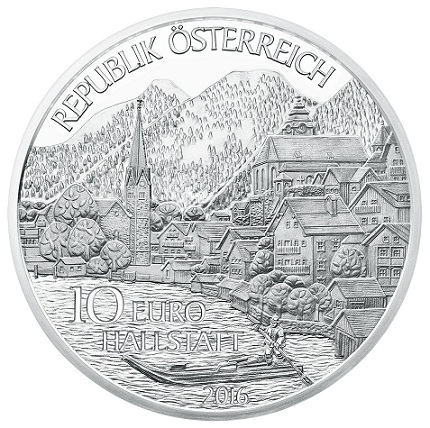 The obverse is designed and engraved by Herbert Waehner and depicts the  picturesque town of Hallstatt, a UNESCO world heritage site. The town’s evangelical church is in the foreground and balanced by the Catholic church on the hill located on the upper right side. The carefully engraved, detailed houses cling to the shore line and are tightly packed together on narrow streets. In the foreground is a flat bottom boat built using the traditional design and steered by the bootsman at the stern. The text REPUBLIK OSTERREICH, 2016, the face value of 10 euros, and the name of the town, HALLSTATT, are also placed on the obverse.

These coins are available from June 1. The Proof coins come encapsulated in a presentation case with a numbered certificate of authenticity. The certificate includes all the technical details as well as background information about the series. The special Uncirculated (SU) coins are available in a blister pack with an Upper Austria design on the sleeve. The copper coins are available only in Austria and have a milled or reeded edge, whereas the silver coins have a smooth edge.

Also available for the series are collection cases for each respective coin type — SU or Proof. For the SU series there is a frosted synthetic box bearing the series logo. The Proof case is made from a heavy card stock and includes a small booklet detailing the whole series.

For more information on this and other coins offered by the Mint of Austria, please visit their Web site. International sales will be dispatched where applicable.