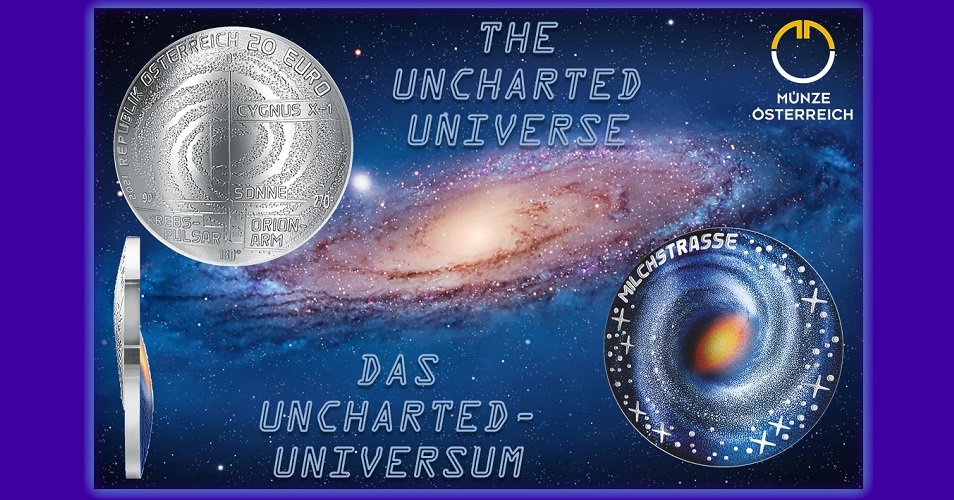 The Austrian Mint has launched (7th April) the first coin of three that launches a new series entitled “The Uncharted Universe” and which highlights astronomy in a way as never before depicted on coinage. Consisting of three coins, the likes of which have never previously been produced, “The Uncharted Universe” explores through coins the deepest depths of the universe and offers a fascinating glimpse of three physical-astronomical phenomena. After the Milky Way, the series focuses on the still-unexplained marvels of black holes and even neutron stars.

The study of astronomy is one of the oldest natural sciences, from the Greek word ἀστρονομία (“astronomia“), which literally means the science that studies the laws of the stars. Early civilisations in recorded history have made their contribution to the natural science that studies celestial objects and phenomena from the Babylonians, Greeks, Indians, Egyptians, Chinese, Maya, and many ancient indigenous peoples of the Americas. All have made methodical observations of the night sky and have attempted to offer insight into our home galaxy we have come to know as the Milky Way. Its name is actually derived from the Ancient Greek myth about the goddess Hera who sprayed milk across the sky, thus the vast spans of stars. Containing at least 100 billion stars, the observable universe itself contains at least 100 billion galaxies and though astronomers had long suspected the Milky Way was made up of stars, but it wasn’t proven until 1610 when Italian Galileo Galilei (1564–1642) turned his rudimentary telescope towards the heavens and resolved that the bands across the sky were made up of individual stars. Astronomers thereafter realised there were many, many more stars in the sky and all of the stars we could obverse are a part of the Milky Way. By that time, Polish mathematician and astronomer Nicolaus Copernicus (1473–1543) had already discredited the long-held belief that the Earth, rather than the Sun, was the centre of the universe. Galileo was able to show that the Sun was just one of a multitude of stars in the Milky Way.

The coins are designed by Helmut Andexlinger of the Austrian Mint; the combination of both the convex and concave effect on the coin’s obverse creates the same effect on the reverse. Thus, the result is an S-shaped (when viewed from the side) raised and lowered surface upon which the Milky Way is depicted. The angular dimensions of the galactic coordinate system show the position of the sun in relation to the rest of our galaxy. The position of the Orion Arm, in which our solar system is located, is also marked, as are the positions of the astronomical phenomena Cygnus X-1 and Crab Pulsar.

These positions also play a special role on the other two coins in the series and will be clearly seen when they are released later in the year. The coin’s reverse features the same image of the spiralled Milky Way, though in spectacular, colour-printed form.

The official release date is Wednesday, the 12th May 2021. Each coin is specially encapsulated to accommodate its unique shape and surface and is presented in an attractive case with a numbered certificate of authenticity.

The “Uncharted Universe” Collector case. A specially designed and constructed case is available to house and present the three-coin set. The lid is attached with magnets and can be removed. The inlay can be set up in such a way that the case can be easily turned into a mini-exhibit of the universe, in which the phenomena on the coins can be explored from both sides. For additional information about this coin and the upcoming series, please visit the website of the Austrian Mint.