The Perth Mint has unveiled the new reverse design and provided release details for the 2013 Australian Kangaroo Gold Bullion coins. This series of 99.99% pure gold coins is available in five different sizes, four of which carry limited mintages.

The 2013-dated coins will officially be released on October 1, 2012. The newly created reverse design depicts a kangaroo in a bush scene. An inscription above reads “Australian Kangaroo”, with the “2013” date and precious metal weight and fineness included below. The Perth Mint’s “P” mint mark also appears. Featured on the obverse of each coin is the Ian Rank-Broadley effigy of Queen Elizabeth II, along with the monetary denomination. 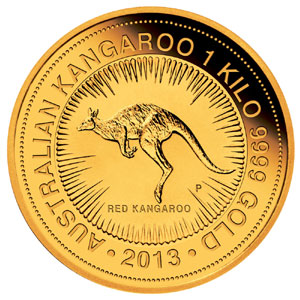 The 24 karat gold coin series traces back to 1986, when it was originally known as the Australian Gold Nugget and featured depictions of famous gold nuggets. Starting with the 1989 proof release, the design was changed to feature a kangaroos. For each subsequent year, a different reverse design featuring the kangaroo has been featured.