The Royal Australian Mint have issued a new twenty cent coin which pays tribute to their history in the sport of Cricket, a nationwide past-time and the “Ashes” tournament which was won this year. Cricket is indeed a national pastime for many Australians, and undeniably linked with the country’s heritage and culture. The “Ashes” tournament and its name has its roots in Australia itself – The coin itself celebrates Australia’s longest sporting rivalry, one that began in 1882 after the British newspaper The Sporting Times published a satirical obituary stating that English cricket had died, its body had been cremated and the ashes taken to Australia. 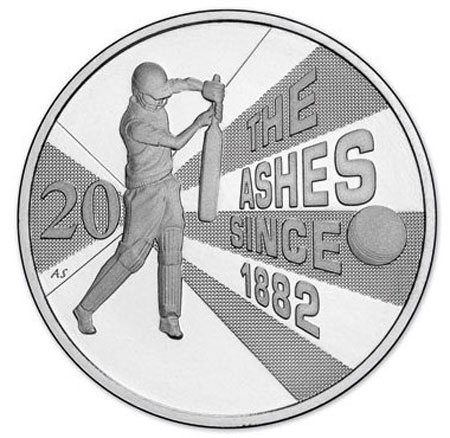 The coin was officially launched by Parliamentary Secretary to the Treasurer the Hon Steve Ciobo MP who commented “Hopefully, the release of this coin will continue to be a good luck talisman for the Australian side.” Also on hand during the launch was CEO of the Royal Australian Mint Ross MacDiarmid who commented “Depicting this epic shared sporting heritage is part of our role to commemorate important Australian themes for future generations, and this coin will provide Australians with the opportunity to take home a piece of this history.”

Continuing the Royal Australian Mint’s long-standing tradition of commemorating important Australian events, the new 20c uncirculated coin celebrating ‘The Ashes’ will be popular with cricket fans across Australia. Designed by Royal Australian Mint coin designer Aleksandra Stokic, the design featured on the coin is striking, with a batsman seemingly hitting a ball right off the metal. The obverse includes the circulation coin portrait of HM Queen Elizabeth II created by Ian Rank-Broadley and used on Australian coins since 2000.

For more information on this and other coins offered by the Royal Australian Mint, please visit their website at: https://eshop.ramint.gov.au/2013-20c-Uncirculated-Ashes-Coin/310290.aspx Information offered in English – International orders dispatched.