The Royal Australian Mint have announced (18th October) the issue of a special coin to mark the sixteenth official visit of Her Majesty Queen Elizabeth II, who will also host the Commonwealth Heads of Government Meeting which takes place from the 28th to the 30th October in Perth, Western Australia. 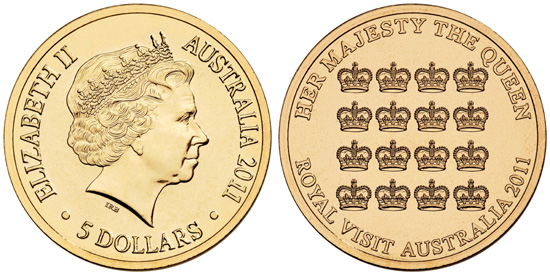 The coin has a $5 face value and is designed by Royal Australian Mint artist/engraver Wojciech Pietranik. The obverse carries the well-known and familiar effigy of Her Majesty Queen Elizabeth II, which was crafted by sculptor Ian Rank-Broadley and has been in use since 1998 on British and several commonwealth countries. The coin’s denomination appears below the portrait.

The reverse includes a field of sixteen crowns, four across and four down. The crown is a replica of St. Edwards’s crown and symbolises the sixteen official visits the Queen (who is also Australia’s head of State) has made during her almost 60 years of reign. The text “ROYAL VISIT AUSTRALIA 2011” appears below the four rows of crowns.

The coin is struck in Aluminium/Zinc/Bronze with a weight of 20 grams and a diameter of 38.7 mm. The Royal Australian Mint have announced that the mintage is unlimited and the coins will be struck in UNC quality. The coin will also be packaged as a two coin set along with the 2011 CHOGM (Commonwealth Heads of Government meeting) $1 circulating coin, unveiled in July.