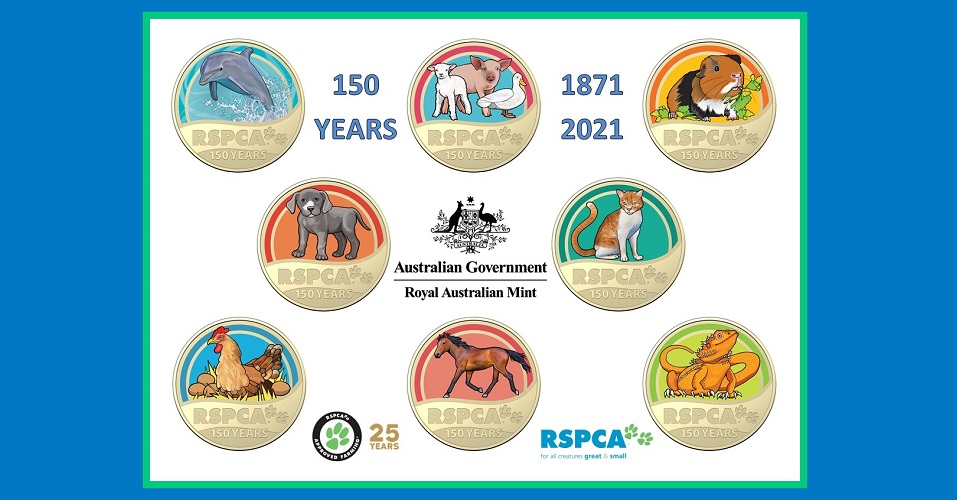 The Royal Australian Mint has launched a seven-coin set of new Brilliant Uncirculated one-dollar coins in salute to 150 years of the work of the RSPCA (Royal Society of the Prevention of Cruelty to Animals). The organisation has essentially become the voice of those who cannot speak, in terms of preventing needless harm or endangerment to both domestic and wild animals. First founded in 1824, it is the oldest and largest animal welfare organisation in the world with many chapters internationally and spearheading the same activities it was based on 197 years ago.

Anti-cruelty legislation was first championed by the Irish parliamentarian Richard Martin and in 1822 an anti-cruelty to cattle bill, often referred to as Martin’s Act, became law. He organised a meeting and extended invitations to various reformers that included parliamentarians, clergy, and lawyers. Their first meeting was held on the 16th June 1824, ironically at the Old Slaughter’s Coffee House in London and the resolution to establish the society was voted on. Originally, the name of their new project was the Society for the Prevention of Cruelty to Animals and Broome was appointed as the society’s first honorary secretary. History was made as it was the first animal welfare charity to be founded in the world and during its first year in operation, they brought 63 offenders before the courts. Princess Alexandrine Victoria of Kent, heir presumptive of King William IV, was so impressed with their activities and cause, she became the society’s patron in 1835.

The coins are designed in consultation with RSPCA, and features colourful creatures great and small including a cat, layer hen, dog, dolphin, horse, lizard, guinea pig, and a wombat. The coins are embellished with the RSPCA logo incused into the curvy relief feature, and include the text 150 YEARS to indicate RSPCA’s 150th anniversary.

The obverse depicts the Commonwealth effigy of HM Queen Elizabeth II created by Graphic Artist Jody Clark. The denomination of 1 DOLLAR is placed below her likeness and the year of issue 2021 is included in the legend surrounding the effigy. 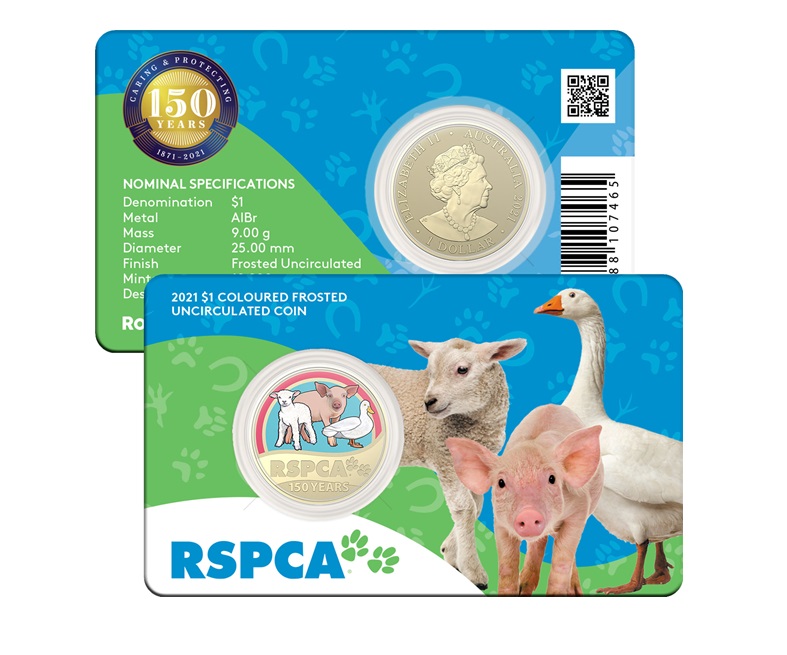 The 2021 150th Anniversary of the Royal Society for the Prevention of Cruelty to Animals (RSPCA) Australia coin program includes:

Seven $1 colour Frosted Uncirculated coins in card, sold individually with a limited mintage of 22,500 each.

A $1 colour Frosted Uncirculated eight-coin collection box, including a special 8th coin featuring the wombat, with a limited mintage of 10,000.

A $1 colour Frosted Uncirculated coin in card featuring farm animals with a limited mintage of 10,000.