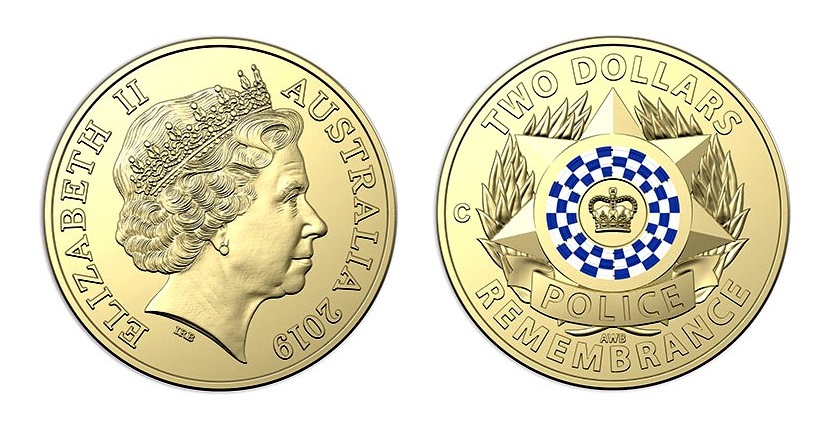 The Royal Australian Mint has launched (11th September) new two-dollar colour coins that are in celebration of the 30th anniversary of National Police Remembrance Day, which honours Australia’s police forces. The releases of the collector’s versions of the earlier circulation coins feature a colour reverse of the same motif.

National Police Remembrance Day is held every year on the 29th September to remember police officers who have lost their lives in the line of duty. The significance of the date is that the 29th September is the Feast of St. Michael the Archangel, who is the patron saint of police and peacemakers. The observance of National Police Remembrance Day also grants police officers the opportunity to commemorate their fallen colleagues. The day has also come to enable and encourage family members to grieve and honour their lost loved ones and act as a reminder to the public of the ultimate price that police might be called upon to pay.

The Minister for Housing and Assistant Treasurer, the Hon. Michael Sukkar, took part in the unveiling and launch of the collector’s editions of the coins and commented:

This coin not only commemorates the 30th Anniversary of Police Remembrance but serves as an everyday reminder of the sacrifices made by Australia’s police forces.

With this 30 year anniversary of police remembrance day and the special minting of the $2 coin, this is a real way for the community to reflect on all that police officers do. When you use and look at that coin, remember the police officers that are out there on the street right now keeping you safe.

The reverse side of the new coin resembles a police badge, incorporating St. Edward’s Crown and the seven-pointed Commonwealth Star, also known as the Star of Federation, which represents the 1901 Federation of Australia. A wreath, which symbolises victory, surrounds the star. A “C” mintmark is placed to the left of the primary design, denoting the Canberra Mint. The obverse side includes an effigy of HM Queen Elizabeth II designed by Ian Rank-Broadley and has been seen on all circulation and many commemorative coins in Australia since 1999.

The coins are presented in a colourful folder describing the National Police Remembrance Day observance, as well as information about the coin and illustrations. For additional information about this coin and others available from the Royal Australian Mint, please visit their website.