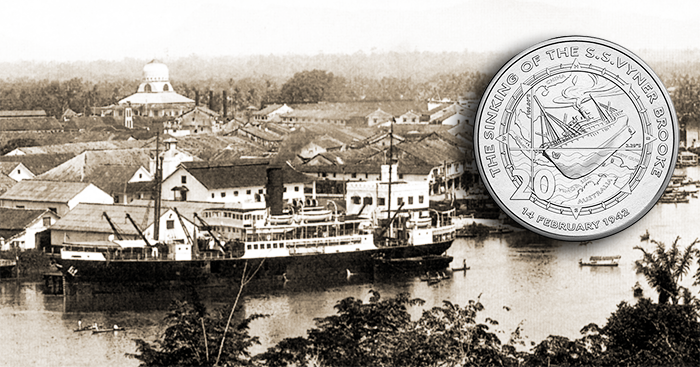 The Royal Australian Mint have launched (10th February) a new coin that remembers the 75th anniversary of the sinking of the SS Vyner Brooke. The tragedy that unfolded after the ship was bombed on the 14th February 1942 was a heartbreaking episode of courage in the face of certain death at the hands of the enemy. This special collectible 20-cent coin recognises the story of this devastating but also inspiring struggle for survival. (Scroll past the table for more on the history behind the coin.) 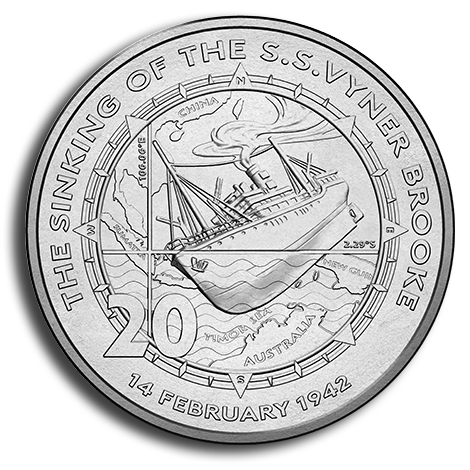 The reverse of the commemorative includes a depiction of the SS Vyner Brooke as it sinks, the location of the ship as determined by the co-ordinates to the left, and elements of the map of surrounding countries in the vicinity. A compass frames the primary design with the number of the denomination, 20, placed to the lower left. The inscription THE SINKING OF THE S.S. VYNER BROOKE surrounds the design towards the top, while the commemorative date 14 FEBRUARY 1942 is placed below. 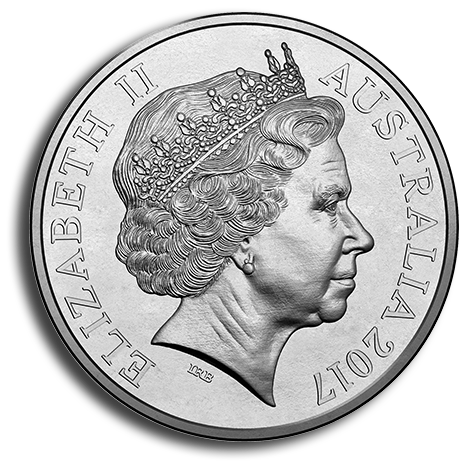 The obverse includes the effigy of Queen Elizabeth II as designed by Ian Rank-Broadley and used on all circulation coinage in Australia since 1999.

The coin is packaged in a colourful folder especially designed for this anniversary; it features several historical images, including a group photo of the Australian war nurses and Australia’s most distinguished war nurse, the late Lieutenant Colonel Vivian Statham AO MBE ARRC ED FNM—also known by her maiden name, Vivian Bullwinkel. The Royal Australian Mint partnered with the Australian War Memorial in developing this commemorative coin as part of the Official Anzac Centenary Coin Program. For more information on this and other coins offered by the Royal Australian Mint, please visit their e-shop webpage. 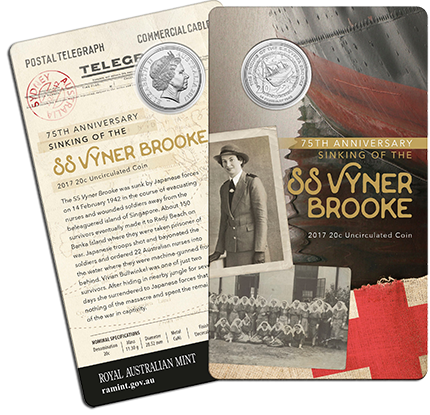 During the Second World War, the SS Vyner Brooke was sunk on the 14th February 1942 by Imperial Japanese forces during the evacuation of medical staff and the wounded from Singapore. A group of 22 nurses who survived the sinking made their way to Radji Beach, Bangka Island, Indonesia, along with wounded patients and a number of men who were soldiers, sailors, and civilians. On the 16th February, a group of the able-bodied people walked to the local town of Muntok to surrender. Another, smaller party went to look for help for the wounded and soon returned to where they had congregated, accompanied by a group of 12 Japanese soldiers. 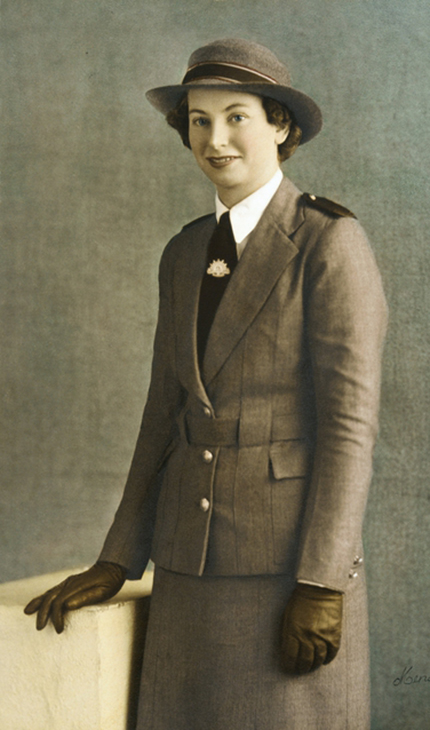 However, the Japanese soldiers had no intention of taking prisoners, especially those in uniform. Instead of providing help or assistance to the wounded, the Japanese soldiers gestured to half of the shipwrecked men to move around a cove. After some time, the soldiers returned, wiping their bayonets and calling for the second group of men to follow. An Australian and an American survived this atrocity and later testified about their experience at the hands of the Japanese soldiers.

The inhumane acts did not end there. The same Japanese soldiers next forced the Australian nurses and a civilian woman to walk together into the sea. These women were then shot from behind with machine guns and fell, one by one. Of this group, only Nurse Vivian Bullwinkel (1915–2000) survived. One bullet had hit her body but missed any vital organs. She lay in the shallow water, pretending to be dead, until the Japanese soldiers had left. Once aware that they had gone, she looked around at her dead comrades in horror. Fearing the soldiers may return, she moved up into the jungle and hid. Nurse Bullwinkel was hidden in the jungle for a further 12 days with a British soldier whom she had found with abdominal wounds (he had not been at Radji Beach). She and the soldier, Private George Kingsley, made their way to the village of Muntok, where they were both able to surrender and taken to the jail along with other survivors of the shipwreck. Private Kingsley did not survive.

While in the jail and fearing for her life, Nurse Bullwinkel told her story of survival to her fellow nurses who hadn’t been part of the massacre—but she swore them to secrecy, as she feared the Japanese would kill her if they knew she was a witness to this horrific act. Bullwinkel was also able to inform Australian army officer Major William Alston Tebbutt of the events, while they were both held in the Muntok jail, ensuring the killings would officially be documented. Nurse Bullwinkel would spend the next three and a half years in captivity in Japanese prison camps. She was ultimately released and returned home to Australia.

She retired from the Australian Army in 1947, having achieved the rank of Lieutenant Colonel. It wasn’t until she was able to testify in Tokyo in 1946 and 1947 that the details of her story were wholly revealed.

Vivian Bullwinkel, the sole surviving nurse of the Radji Beach massacre, died in 2000. In honor of her bravery and stoicism, her nephews, Michael and Ian, returned to Radji Beach in 2016 and placed a floral tribute to the memory of their aunt and the other nurses.   ❑
Share: