Prices for ancient coins are showing a continuing upward trend. Coins in the best condition yield maximum prices, be it Greek coins, Roman or Byzantine ones; when the coin comes in an average condition the collector may well acquire a rarity at a reasonable price. Modern Times witnessed a trend reversal, with Russian coins brought back down to earth. 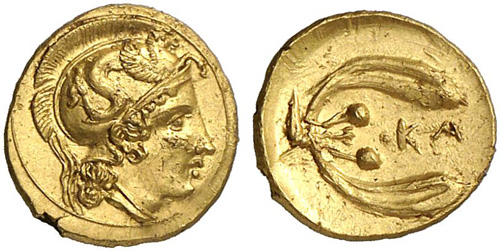 On Monday, March 5, 2012, at 10 a.m. sharp, Gorny & Mosch started the auction for which dealers from all over the world had traveled to Munich. Already lot no. 37 sprang a surprise. A small, extremely rare and extremely fine gold coin weighing 1.16 grams from Kamarina yielded 37,950 euros after being estimated at 7,500 euros. The collector who settled for the next lot , a variant not quite as perfect, paid “just” 10,925 euros.

Almost inexpensive in comparison seemed a very fine tetradrachm from Acragas with two eagles rending the hare. The winner purchased it for 14,950 euros, i.e. the same price an extremely fine tetradrachm of Agathokles from Syracuse with Kore on the obverse and Nike building a tropaion on the reverse realized (estimate: 7,500 euros). Another very expensive coin was a tetradrachm of King Perseus, under whose neck section the signature of Zoilos can be read. The finely toned piece rose to 36,800 euros against a pre-sale estimate of 6,500 euros. And that result was still modest when compared with the prices yielded by the coins from the late Republic.

Auction 203 came up with two aurei, both showing the portrait of Octavian. The first was part of an emission issued shortly after the Treaty of Brundisium in late autumn 40 B. C. The extremely rare piece in good very fine had been estimated at 25,000 euros, but the end price more than doubled this estimate. The coin changed hands for 50,600 euros.

The buyer of the next lot, an aureus of Octavian, minted in 43 B. C. during the march through Gallia Cisalpina, would have been happy if the bidding had stopped at that sum. The bids, however, rose continuously. The new owner of the piece with the portrait of Octavian and deceased Julius Caesar paid 172,500 euros – the highest price of the entire auction. 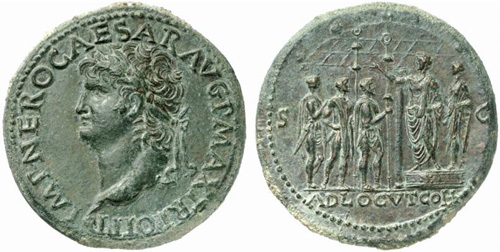 The bids remained high. An extremely fine denarius of Augustus with riding Gaius Caesar on the reverse was sold for the sum of 25,300 euros (estimate: 1,500 euros). The magnificent cover piece, a perfect sestertius of Nero with an adlocutio realized 74,750 euros estimate: 30,000 euros). A veristic denarius of Galba, modestly estimated at 1,500 euros, yielded 27,600 euros. The sestertii in general: one of Nerva, commemorating the abolition of the Fiscus Judaicus, brought 16,100 euros on its estimate of 3,500 euros, and one of Trajan showing the bridge crossing the Tiber River on the reverse was sold not for its estimate of 4,000 euros but for 14,950.

Let us conclude the Roman coins with an incredible result for an antoninianus of Victorinus. The very rare and extremely fine piece showing the radiate, cuirassed bust had been estimated at 500 euros. A special collector gladly paid 8,625 euros for this item struck in the German city of Trier.

Anyone who keeps an eye towards their budget loves the second catalog of Gorny & Mosch bearing the title “Ancient coins and lots”. Attractive fractions for 200 euros – that’s no problem at all; tetradrachms from Syracuse for less than 1,000 euros – plenty of it. The special collector readily browses through as well so that some modest a piece may obtain a sum many times its estimate, like, for example, a bronze from Lydian Saitta, minted under Gordian III, showing Heracles and Cerberus on the reverse. The rare piece, which may well have attracted the attention of a collector of the Labors of Heracles, rose to 690 euros end result on its pre-sale estimate of 200. The lots at the auction’s end have virtually achieved cult status by now. 110 lots of the total 120, whose estimates added up to 67,000 euros, changed hands for 106,000 euros.

The fate of auction 205, “Medieval and Modern Times”, already became obvious when the first lot was sold: an extremely fine denarius of Charlemagne had been estimated at 2,000 euros and was sold for 9,200 euros in the end. Many of the Italians present had waited for a collection of Italian coins from Medieval and early Renaissance Times with excitement. And indeed the approximately 200 lots became a highlight of the auction. The end result read c. 330,000 euros against the pre-sale estimate of 135,000 euros. Almost every piece brought two or even three times its estimate. There were only a few lots left unsold. Here are some particularly spectacular results: a testone of Ercole I d‘Este (estimate: 2,000 euros) obtained 14,950 euros; a small series of three augustaleis had been estimated at 29,500 euros altogether and yielded 87,400 euros. The most expensive piece of the three was sold for 36,800 euros and therewith became the most expensive item of the entire auction.

The most impressive trend upward showed a rare variant of a multiplo di tarì of Charles I of Anjou. The extremely fine piece rose from its estimate of 1,500 euros to 20,700 and was yet put in the shade by the result of a reale d’oro from Messina with the portrait of Charles of Anjou which changed hands for 27,600 euros (estimate: 9,000 euros).

German coins appeared rather modest in comparison even though there were some remarkable results to be witnessed here, too, such as 12,650 euros for an Inngold ducat 1780 of Charles Theodore of Bavaria (estimate: 7,500 euros) or 13,800 euros for a reichstaler 1667 of Frederick William of Brandenburg-Prussia on the death of his wife (estimate: 10,000 euros).

The collection Hanover – without the accompanying lots – with numerous fractions to be sold in auction 205, yielded sound results throughout. In contrast to the estimate of 40,000 euros, the end result added up to roughly 84,000 euros. The most expensive piece, with its price of 10,925 euros, was a 2/3 taler on the yield of the mine Bergwerkswohlfahrt of William IV of Hanover.

German Imperial gold and silver coins listed in the “Jaeger” has attracted many new collectors in the previous months. That is confirmed by the results of this auction. To state but a few examples: a 10 mark piece 1905 Berlin Mecklenburg-Strelitz, estimated at 5,000 euros and sold for 12,650 and a 10 mark piece 1898 Munich Saxe-Meiningen, estimated at 5,000 euros and sold for 10,350.

Last but not least, Russia. Let us make one thing clear: the trend upward has come to a halt. For good, fresh collector’s items, however, good prices can still be obtained, where collectors with a tighter budget get their chance, too.

A case in point is the nice collection of Russian dengi. The major part of these small and inconspicuous silver objects had been estimated at 100 euros, many were sold for sums just above their estimate. Some, in contrast, took a flying leap depending on motif and rarity. Like, for example, a denga of Boris Alexandrovich from Tver with the depiction of a mint master in the process of minting. The piece brought 2,760 euros (estimate: 100 euros). 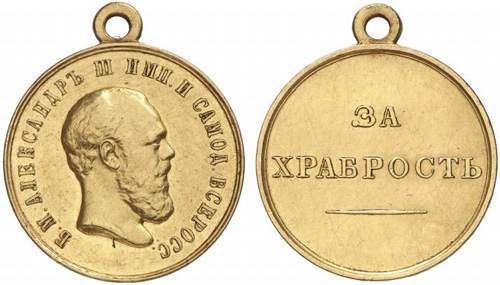 The later coins produced a few surprises, but considerably fewer than in previous auctions, like an achievement medal of Alexander III. The extremely fine piece had been estimated at 1,000 euros and was auctioned off for 14,950 – that was impressive but, even so, for the first time in a long while the most expensive piece of the auction did not come from Russia.