On 2 July 2014, the Osnabrück auction house will conduct its 250th auction sale. Since 1985 the company, which was founded in 1971, has regularly held several important auctions every year, which attract coin collectors and dealers from all around the world to the North of Germany. This time, too, auction sale 250 is just one event of many during the five-day auction week over the course of which roughly 5,000 lots will be changing hands in the total of four auctions. The range covers gold and silver coins from Germany and from all around the world. In addition, four special collections will be auctioned off: Coins of the Kingdom of Prussia / The Masuren Collection will be sold; further you will find the Dieter Braun Collection / Münster and Westphalia in the Context of the European Monetary History, as well as Coins of the German Empire and an important private collection with test strikes for the German coins since 1871.

The auction week starts with coins and medals from medieval to modern times from all around the world. Whether Austria or Ukraine – it doesn’t matter which country one collects for there is something available here from every collecting field. The aficionados of Swedish coins are likely to be delighted with a series comprising roughly 130 lots. The most spectacular item of this section is an extremely rare 4 daler of John III n. d., minted in Stockholm in 1587, depicting the portrait of the ruler encircled by the coat of arms of the 23 provinces (298, nearly VF, estimate: 10,000 euros). 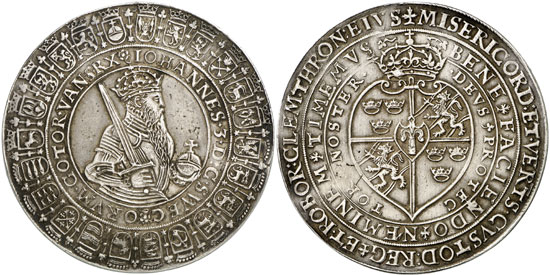 It will be exciting to see how many bidders will be trying to acquire a testimony of the German assistance in the development of the Chinese Western-style coinage. Whereas in auction sale 246, a pattern from the Esslingen Prägeanstalt Otto Beh, that had come with an estimate of 5,000 euros, obtained 38,000 euros, now four further patterns are on offer, from the Fungtien Province, from Heilongjiang and Hunan (466-469, all EF and nearly FDC, respectively, estimate each: 5,000 euros). It remains to be seen what they will obtain because most of the pieces were hitherto completely unknown.

Much interesting material, a good part of it being very reasonably estimated, is also available for the admirers of the Habsburg monarchy. They can pick from large numbers of thaler from different years. This series’ gem is a schauthaler of Ferdinand I, minted in Klagenfurt in 1532, that exhibits on its reverse the crowned coat of arms of Carinthia, surrounded by the shields of Hungary, Austria, Bohemia, Styria and Carniola (498, nearly EF, estimate: 10,000 euros). The rare commemorative coin of Franz Joseph I on the opening of the Mt. Raxalpe Inn from 1877 is likewise offered for sale. Just 100 specimens had been produced of this issue (742, proof, estimate: 7,500 euros).

The highlight of the second day with coins and medals from Germany before 1871 is the collection of Dieter Braun: Münster and Westphalia in the Context of the European Monetary History. The collector, born in 1928, was pharmacist out of passion and devoted the lion’s share of his scarce spare time to assembling a coin collection. He was a customer of Künker’s since the company had been established in 1971, and the long-standing business relationship turned into one of those typical friendships that can often be encountered with collectors and dealers. The focus of his collection is on the coinage of his native Westphalia, but at the same time he also documented the most important cornerstones of the monetary history of Europe. Hence, the Braun Collection comprises both an augustalis of Frederick II of Sicily (1648, VF, estimate: 5,000 euros) and the renowned wiedertäuferthaler (1837 and 1838, VF + and EF, respectively, estimate each: 1,000 euros). As a matter of fact, the customer detects any number of rarities, like for example a goldgulden of Henry of Schwarzburg, 1466-1496 (1713, VF, estimate: 10,000 euros), a ½ thaler of Franz von Waldeck, minted after the re-capture of Münster in 1535 (1716, VF, estimate: 10,000 euros) and a double ducat of Christoph Bernhard von Galen, 1650-1678 (1729, EF, estimate: 10,000 euros).

Auction sale 250 – Coins of the Kingdom of Prussia: The Masuren Collection

From the coronation of Frederick I as King in Prussia on 18 January 1701 to the proclamation of Emperor William I on 18 January 1871 – that is the period of time covered by the Masuren Collection, a unique selection of Prussian coins. With meticulous care the collector had assembled mainly gold coins but also crown size silver coins according to year’s issues. Even the scarcest items are present in the finest states of preservation, so that remarks like ‘very rare in this condition’ or ‘very rare, especially in this condition’ can be found throughout the catalog. It is really hard to decide which pieces to single out from this vast range of offers. So, let us be guided purely by the financial aspect, the estimate: the most expensive coin of the collection is one of 16 specimens manufactured for collectors from the dies of a speciesthaler of Frederick II from 1755 never to be issued (2753, nearly FDC, estimate: 30,000 euros). 15,000 euros each is the estimate of a reichsthaler of Frederick William I, 1719 IGN, Berlin (2567, EF), a reichsthaler of Frederick William I, 1714 from Neuenburg (2599, nearly EF) and war currency for Saxony, a double mittelaugust d’or, minted by Frederick II bearing the portrait of August III since 1758/9 with the year 1755 (2762; nearly EF).

There is no need for any collector to get scared off by this selection of pieces singled out, though. Bids can be placed as low as 100 euros because many lots of the collection come with low three-figure estimates.

Thursday morning is devoted to gold coins from Germany before 1871 and from all around the world. One is easily amazed at what will be auctioned off over the course of a single day. From Great Britain come some particularly outstanding rarities, like an angel of Philip and Mary, 1547-1553, minted in London (3066, EF, estimate: 25,000 euros).

The undisputed gem of this section is a perfect example of the most famous coin type ever struck for young Empress Victoria: “Una and the Lion”, in which the juvenile female monarch presents herself to her subjects in an enchanting depiction as Faerie Queene. This type is thought to be the most beautiful British coin ever struck (3078, proof, estimate: 50,000 euros).

Poland is present with some rarities, too, like the most expensive piece of the entire auction sale because of its estimate amounting to 125,000 euros: a 5 ducat piece of Sigismund III, minted in Bromberg in 1623, of which just three examples are known to exist (3145, EF-FDC). The other lots from Poland likewise are something not to be missed. Let us just mention the two ducats of Wladyslaw IV from 1642 (3146, minted in Bromberg, VF, estimate: 40,000 euros) and 1644 (3147, minted in Krakow, VF-EF, estimate: 50,000 euros).

It almost seems needless to add that there are also many golden rarities from Germany available for purchase. Bavaria in particular presents a broad range of offers, including for example the golden test strike of 8 ducats made with the dies of the konventionsthaler from 1818 on the constitution in its original receptacle (3457, FDC, estimate: 25,000 euros). Other states come up with rarities as well, like Hesse-Kassel with a 5 thaler piece from 1820 which, in all probability, is the only specimen available on the market (3521, EF, estimate: 30,000 euros) or the County Wallmoden-Gimborn, in whose name a ducat was struck in Hanover in 1802 for the birth son of the British king Georg II (3657, nearly FDC, estimate: 20,000 euros).

Thursday afternoon focuses exclusively on Russian coins. The most expensive lot is estimated at 75,000 euros. It is a gold medal of P. Brusnitsyn from 1859 on the erection of the monument for Nicholas I in St. Petersburg (4152, EF-FDC).

Anyone collecting coin of the German Empire is in for some excitement on Friday for what Künker offers in its auction sale 252 is nothing less than an exquisite selection of gold and silver coins, the crème de la crème, that is highly likely to make every collector want to join in and place a bid. The fractions naturally have a few scarcities to offer as well, like a 20 pfennig piece from 1887 E, of which just 50 examples were manufactured (4506, EF-FDC, estimate: 4,000 euros) or a 1/2 mark piece 1908 F in proof (4520, estimate: 6,000 euros).

Generally speaking, the silver section includes every one of the great rarities like the Bavarian 3 mark piece from 1918 on the golden wedding anniversary of the royal couple of which just about 130 specimens were made (4572, EF-FDC, estimate: 20,000 euros), or the famous “Frederick the Wise”, probably the most accomplished coin of the period (4705, proof, estimate: 60,000 euros).

The spectacular end of the day is a special collection of test strikes for German coins after 1871. It comprises 150 lots and includes many a piece that is rarely encountered on the market, like for example a probably unique pattern for the Saxon 3 mark piece “Frederick the Wise” in aluminium (5509, EF, estimate: 5,000 euros) or a 10 reichspfennig piece 1947 that was produced under Allied occupation, that features the so-called “Slavic Seven” (5571, EF, estimate: 4,000 euros).