The first major U.S. coin sale of 2016 will be Heritage’s annual FUN (Florida United Numismatists) auction. Split over various sessions, a wide variety of American coinage will be on offer, stretching from colonial times to the present day. Many of the most noteworthy items will be sold during the traditional Platinum Night, held on the evening of January 7.

In this article, we will take a look at some of the most interesting items that Platinum Night will offer. The entire catalog, as well as information on the other coin and currency auctions held in conjunction with the Tampa FUN show, can be viewed on Heritage’s Web site. 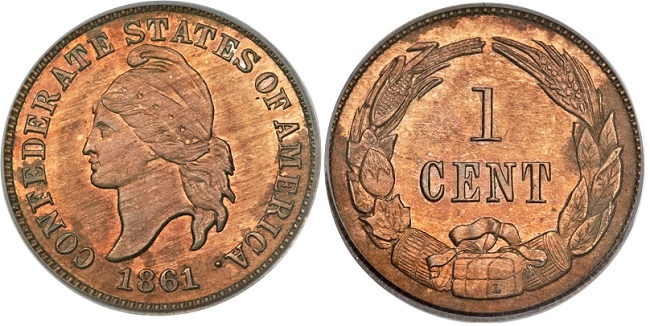 The Confederate States of America existed briefly during the American Civil War, and its numismatic history is mostly confined to an extensive issue of various bank notes. The CSA did plan a coinage, but these plans were never fruitful, and the small number of coins that have survived from the Confederacy are correctly attributed as patterns, as they never circulated. In addition to this, most surviving CSA coins are restrikes made at a later date, and originals are notoriously difficult to track down. Lot 5246 in Heritage’s FUN auction offers such an original coin: an 1861 Confederate States cent, graded MS-64+ by PCGS and stickered by CAC. Less than twenty originals are known to exist, and they rarely come up for auction. This particular coin is considered to be among the finest known examples of this American rarity and is pedigreed to the John J. Ford and Simpson collections.

The 1943 steel cent does not need an introduction, nor do the 1943 error cents struck on bronze planchets. Lot 5266 is part of a seldom-encountered offering of such coins in one auction; this particular example was struck in 1943 at the Philadelphia Mint on a leftover bronze planchet, and graded AU-58 by PCGS and stickered by CAC. Pedigreed to the Simpson collection, there are perhaps a dozen or so such error cents from the Philadelphia Mint known to exist.

Lot 5267 offers another 1943 bronze cent, struck at the San Francisco Mint and graded AU-55 by PCGS. The 1943-S bronze cents are even scarcer than their Philadelphia counterparts–only a total of six confirmed examples are known, of which this is considered to be the third-finest known. While there is no 1943-D bronze cent in this auction, it is worth noting that the unique issue also resides in the Simpson collection, which is the only complete 1943 and 1944 off-metal Lincoln Wheat cent collection. 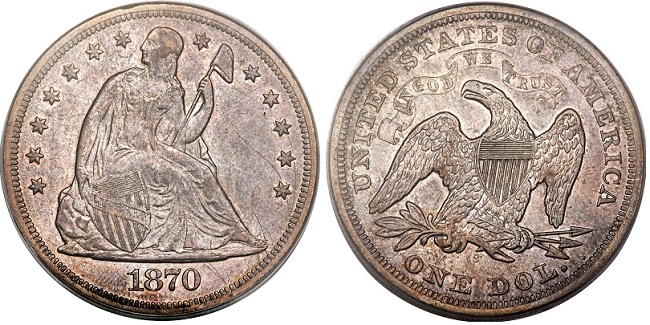 Silver dollars are and have always been one of the most popular denominations to collect. There are plenty of rarities in the series, which was struck for circulation from 1794 to 1935, with various long gaps in between when demand for the denomination was low. Lot 5462 offers one of the rarest silver dollars, the 1870-S Liberty Seated dollar, of which just nine examples are known to exist (with one or two others rumored to exist, from a mintage suspected to be just twelve pieces). Graded XF-40 by PCGS, the coin falls (condition-wise) in the middle of the nine known specimens, all but one of which are in circulated condition.

Not much is known about this rarity, except that mint records do not list any silver dollars having been struck at the San Francisco mint in 1870. One plausible explanation is that they were struck as mementos to the opening of the second San Francisco Mint, which occurred in 1870, but facts are scarce, and it is doubtful we will ever hear the full story of this coin’s creation. 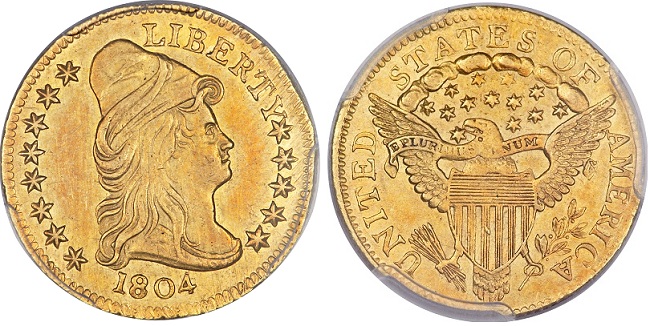 The early American mint in Philadelphia had trouble creating a consistent output in the early years of its operations, as is evident from the wide variety of types of early American coinage. This is especially apparent in the gold denominations, which were struck irregularly, and which caused Philadelphia Mint employees to mix and match dies throughout various years.

To give an example of how this played out, we can look at the 1804 Quarter Eagle, of which two die varieties are known to exist: one with thirteen reverse stars and the other with fourteen reverse stars. Lot 5530 in the Heritage auction is an example of the former, graded AU-55 by PCGS and stickered by CAC. The 1804 Quarter Eagle had a very limited mintage (generally listed as 3,327 coins for both varieties), but the thirteen star variety is clearly the rarer of the two, with less than a dozen pieces known in all grades. The AU-55 offered by Heritage is the second-finest known example of this rarity, with only a single AU-58 finer. 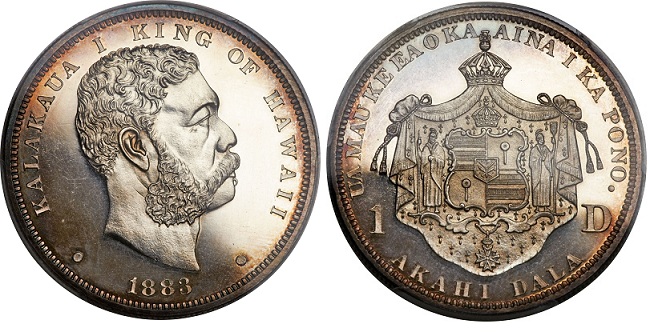 Even though Hawaii did not become a United States territory until 1898 and a state in the union until 1959, the limited Hawaiian coinage struck prior to that is often collected with the American series. Besides token coinage, a one cent piece was struck for the islands in 1847, and four different denominations of silver coinage were struck in 1883.

Lot 5732 in the Heritage Auction features one of the most impressive Hawaiian coins: the 1883 Hawaiian dollar, graded PR-65 DCAM by PCGS. Featuring the effigy of King Kalakaua I of Hawaii, the Dala (as it is called in Hawaiian) was struck at the Philadelphia Mint for circulation on the Hawaiian Islands. Besides 500,000 coins struck for circulation, the Philadelphia Mint struck a grand total of 26 Proof dollars for Hawaiian dignitaries. The coin offered by Heritage is the single finest survivor of this extremely low mintage, and last traded hands in 2008, when it sold for $138,000.

All images courtesy of Heritage Auctions.