After two installments last year, the sale of the D. Brent Pogue Collection continues in 2016 with a third auction in New York City on February 9. The joint sale is organized by Stack’s Bowers Galleries and Sotheby’s and will offer a total of 158 lots consisting of half cents, large cents, dimes, half dollars, three-dollar gold pieces and half Eagles.

As we have mentioned in our previews of the previous sales, we consider each and every coin in this collection a highlight, but will limit our selections to five lots that are worth mentioning because of their rarity, quality, or background story. The entire catalog, including photos and descriptions, can be found on the Stack’s-Bowers Web site. 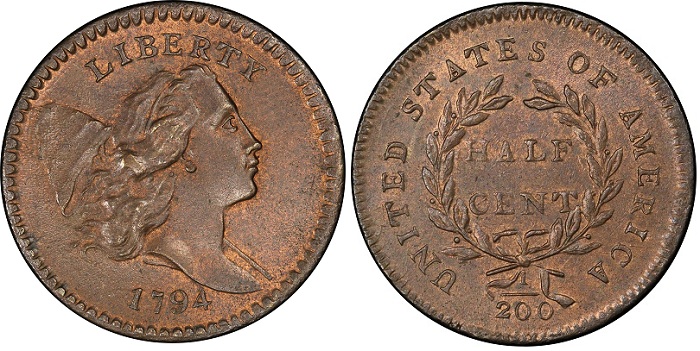 The first coin we will take a look at is a 1794 half cent, graded MS-66 RB by PCGS and offered as lot 3005. Considered the second-finest known of this date — surpassed by a single MS-67 RB — the most interesting aspect of this coin is found in its provenance. Ownership of this piece, together with several others, can be traced back to the late 18th century. In fact, it is very likely that we know who has owned this particular half cent from the moment it left the Philadelphia Mint.

The story begins with an Englishman, Sir William Strickland, who visited the Eastern seaboard of the United States between September 1794 and July 1795. During his visit he acquired various coins, perhaps from the Mint itself, which he brought back to England. For the next 197 years it remained in the same family, until it was offered for sale at auction in 1992. Over time, the coin mellowed to a reddish-brown, as can be expected with any copper coin stored for such a long time. As the catalog mentions, the coin has the oldest known provenance of any United States coin and — paired with the coin’s outstanding quality — it makes for an outstanding rarity with a great story. 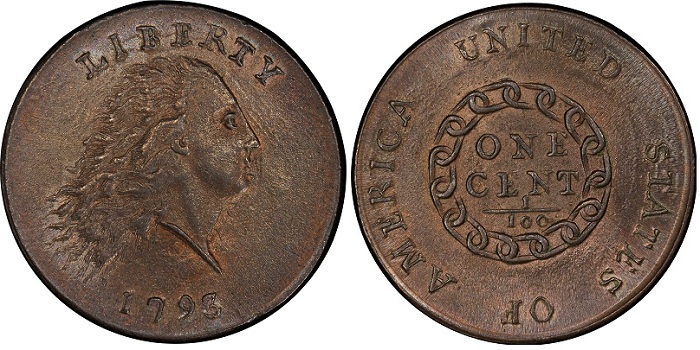 The Chain cent holds a special place in American numismatics. The first design of America’s most-loved denomination, it was replaced soon after its introduction after controversy arose over the chain displayed on the reverse. Originally meant to signify unity of America’s original thirteen states, it was interpreted to be a link to slavery. Despite having been struck well over two centuries ago, a number of high grade circulation strikes exist, one of the finest of which is offered in this installment of the Pogue collection as lot 3013.

Graded MS-65 RB by PCGS, the coin is a most noteworthy example of this iconic type. Carefully cared for since its time of striking, the coin has a pedigree that can be traced back to the late 19th century, at which time it was already heralded as a rarity and a very special coin. Now it is considered one of the rarest copper coins in existence, especially since it retains some of its original Mint red color (this is the only Chain cent graded Red-Brown by PCGS), and it should see spirited bidding when it comes up for auction. 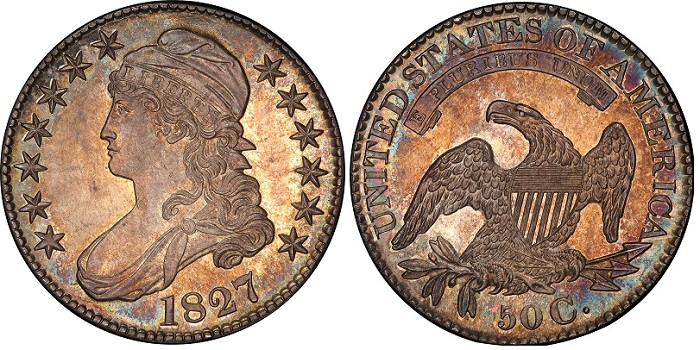 Type collecting is a very popular way to collect United States coinage. Most collectors choose to collect circulation-strike coinage, with one of each major type included in such a collection. It is certainly possible to collect Proof examples of most types of United States coinage, though such a task would be much harder. Lot 3062, a 1827 half dollar graded PR-67 by PCGS, would be a most excellent start to such a collection, as it is the finest Capped Bust half dollar Proof in existence.

Struck only by special order and in extremely limited quantities, early American proofs are among the rarest of all coins, with just three known of this particular variety. The coin has a pedigree that goes back to the early 20th century, but the breathtaking quality and eye-appeal of this particular example indicates that it was exceptionally well taken care of since its creation at the Philadelphia Mint in 1827. 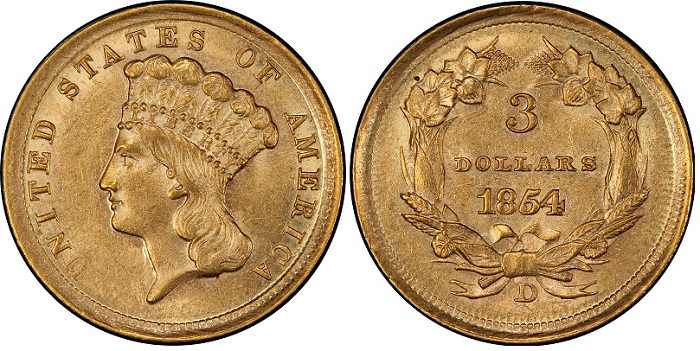 Moving into gold coinage, this installment of the Pogue collection includes the three-dollar gold pieces (complete except for the unique 1870-S) and the second part of early half Eagles. One of the true highlights of the long obsolete $3 gold collection is lot 3090, the only coin of this denomination struck at the historic Dahlonega mint. A classic rarity, just 1,120 1854-D $3 gold pieces were made, of which virtually all survivors (estimated to be around 150 pieces or so) display various degrees of wear from circulation. The Pogue coin, however, is a notable exception, and the MS-62 grade by PCGS makes it the sole finest-known example of this classic key-date.

The Dahlonega mint was located in the Northwestern part of Georgia, and solely struck gold coins during the years it was open, from 1838 to 1861. Today a quiet town of about 5,200 residents, in 1828 it was the location of the first major gold rush in the United States. All coins struck at this small mint are scarce to rare, with the 1854-D $3 gold piece considered to be among the rarest of all. 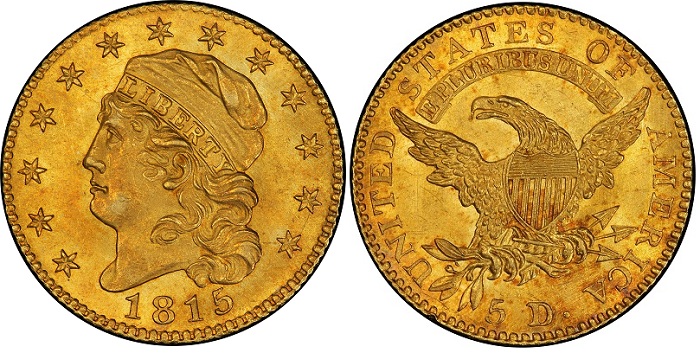 The collection of early half Eagles in the Pogue collection is very significant, including many extremely rare coins in a series that is rare to begin with. The highlight, of course, will be the 1822 half Eagle, unique in private hands, which will be sold at a later date. Another true highlight in the series is lot 3149, the single finest-known example of the 1815 Capped Bust half Eagle, graded MS-65 by PCGS.

A total of just 635 of these coins are believed to have been struck, all from a single die pair, with most having been melted, lost, or destroyed over time. One of just six known examples in private hands, this coin has been heralded as a classic American rarity as far back as the 19th century, when just a few examples were rumored to exist. Over time, very few additional examples have shown up, and any 1815 half Eagle is considered to be among the rarest of the rare among all early American gold coins. The coin in the Pogue collection has been off the market for three decades, giving potential buyers a true “once-in-a-lifetime” opportunity to add such a great rarity to their collection.