Former NASA Astronaut Richard Hieb has launched the third and final coin within the Royal Australian Mint’s Southern Sky series. The 1 oz silver domed coin features Orion, one of the most widely recognized star constellations visible in both the northern and southern hemispheres. The Southern Sky series began in 2012 with a design featuring the Crux or Southern Cross constellation. The second coin of the series issued in 2013 featured the Pavo constellation, which carries the Latin name for peacock. Each coin in the series has featured an innovative domed shape and color printing to emulate the presence of the constellations in the celestial sphere.

The Crux coin was a sell out success for the Mint and was presented with an “Australian Engineering Excellence Award” in 2013 and a Krause Publications “Coin of the Year Award” in 2014. The Pavo coin was named “Most Beautiful Coin” at the 2014 Mint Directors Conference held in Mexico. 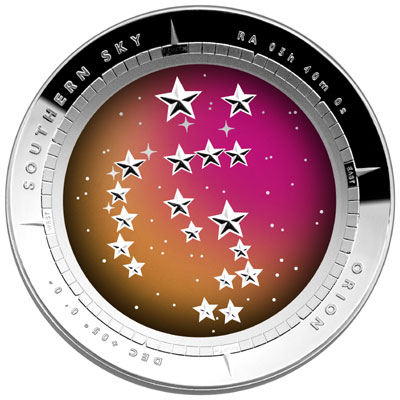 The new Orion coin features a depiction of the stars of the constellation as seen from the southern hemisphere against an iridescent colored background. Keeping with the format of the series, a compass themed border surrounds the design and includes navigational markers and coordinates. The convex obverse design of the coin carries the Ian Rank-Broadley effigy of Queen Elizabeth II with the legal tender face value of “5 Dollars” and the 2014 date.

To launch the coin, former NASA astronaut Richard Hieb struck three of the coins during a visit to the Royal Australian Mint. During a career that included three space flights, Mr. Hieb flew on the original flight of the space shuttle Endeavour and was a member of the first three person spacewalk. He broke a 20-year record for the longest extra-vehicular activity (spacewalk).

Royal Australian Mint CEO Mr Ross MacDiarmid said, “It is fantastic to have the final coin in the innovative Southern Sky series which celebrates the most prominent constellation, launched by someone with first-hand experience in space. Rick Hieb will be the first astronaut to set foot in the Mint for a ceremonial striking such as this.”

The latest deep space exploration mission being advanced by NASA, also named Orion, is laying the groundwork to send people to Mars in the years after 2017.

“Sending people to Mars is a grand endeavour that will drive innovators to create all sorts of new technologies, and the coincidence that this coin and the deep-space mission are both named Orion in honour of that prominent constellation, is not lost on me,” said Mr Hieb, currently a Vice President with Lockheed Martin’s Antarctic Support Operations.

“I have accumulated some significant firsts throughout my career, but this is the first time I have ever been able to strike a coin myself. I am truly thankful to the Royal Australian Mint for being provided with that opportunity.”

Now that the coins have been struck, Lockheed Martin and the Royal Australian Mint have resolved to approach NASA to see if one may be included in the payload of an Orion capsule undertaking a deep space mission in the future.