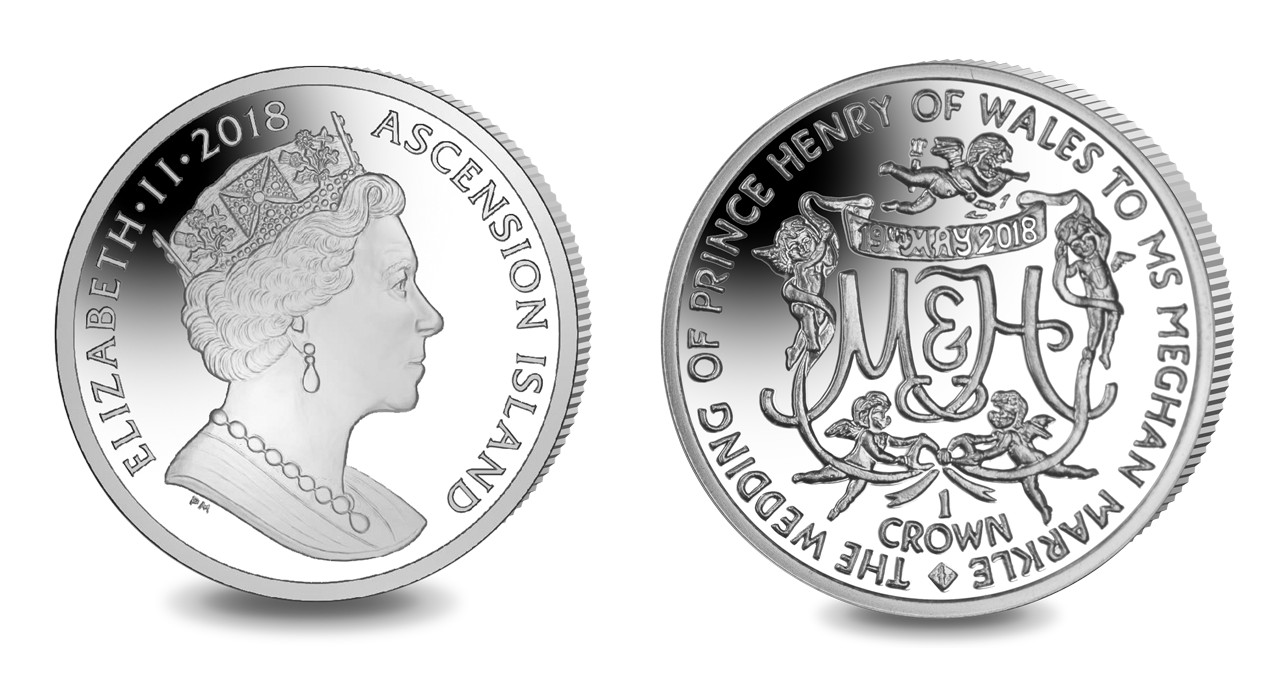 The government and treasury of Ascension Island have issued (22nd March) new crown coins which are in celebration of the wedding of His Royal Highness Prince Henry of Wales, commonly known as Prince Harry to his fiancé Megan Markle, which will occur on the 19th May at Windsor Chapel.

Prince Henry is the third grandson of HM Queen Elizabeth II and HRH Prince Philip, the Duke of Edinburgh, and the second son of HRH Charles, Prince of Wales, and the late Diana, Princess of Wales. He was born in London on the 15th September 1984, and was the couple’s second child. He was given the first name of Henry but was nicknamed “Harry” by his mother which he has been informally known as ever since. The Prince gained a significant amount of attention upon the untimely death of his beloved mother Princess Diana when he bravely walked behind her procession on the day of her funeral. The world has essentially followed every milestone of his life and he has been the subject of intrusive attention in the media from his first days at school to his embarking on a military career. The United Kingdom waited until the day that there would be an announcement of an impending wedding of one of the country’s favourite members of the Royal family and this collective anxiety was finally alleviated when on the 12th February, Buckingham Palace announced on behalf of Her Majesty the Queen that her beloved grandson had become engaged to his girlfriend, M.s Megan Markle, whom he had been dating for the last year. Ms. Markle, a television actress who hails from Los Angeles, embarked on an acting career at a very young age — gaining fame for her television role in the series Suits. The couple were introduced to each other by mutual friends and a budding relationship developed between the two.

The very modern Royal Couple will be married on Saturday, 19th May at 12:00 noon which actually breaks from tradition as Royal Weddings usually take place on a weekday. The wedding itself will take place at St. George’s Chapel in Windsor Castle, where the Dean of Windsor will conduct the service, and the Archbishop of Canterbury will officiate the couple exchange of their vows. The couple wish this to be a special occasion for their friends and family, but also want the day to be shaped to allow members of the public to feel part of the celebrations. To incorporate this wish, 2,640 members of the public have been invited to the grounds of Windsor Castle. 1,200 of these special invitations will come from nominations from the nine regional Lord Lieutenants ensuring that the whole of the United Kingdom is included. This will allow these people to watch the arrival of all the guests, as well as the bride and groom, and also the carriage procession as it leaves St. George’s Chapel and travels around Windsor Town before returning to the castle via the long walk. In another break from tradition, it has been announced that the wedding cake will be a lemon elderflower cake baked with organic ingredients and will feature the bright colours of spring.

Upon her marriage to a high ranking member of the royal family, Ms. Markle, who has since officially retired from acting, will become Her Royal Highness, the Princess of Wales — but will more than likely become and be referred to as a Royal Duchess with a title yet to be announced. Her title will most likely be known on the actual day of the wedding and will be decided upon by the Queen herself. Ms. Markle will also become the first titled American-born member of the British royal house and family. 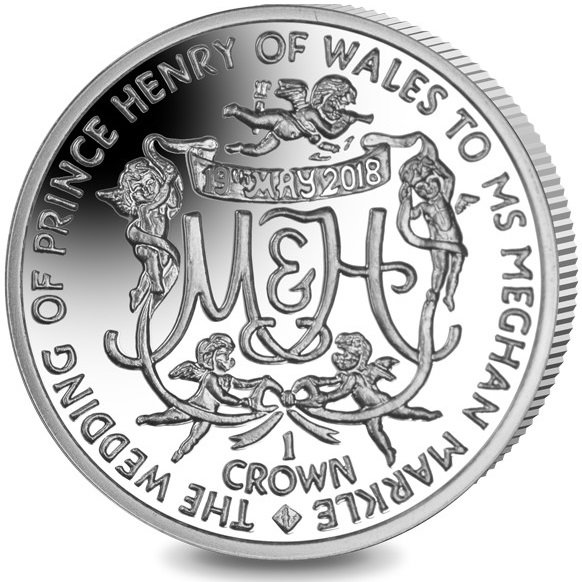 The coin is produced by the Pobjoy Mint at their facilities in Surrey, England, on behalf of the treasury of Ascension. The reverse design on the coin itself features the initials of the Royal Couple M&H in the centre surrounded by a ribbon which is supported by four cherubs. The date of the actual wedding is displayed in the ribbon. A fifth cherub can be seen flying above blowing a fanfare in celebration of the Royal Wedding. 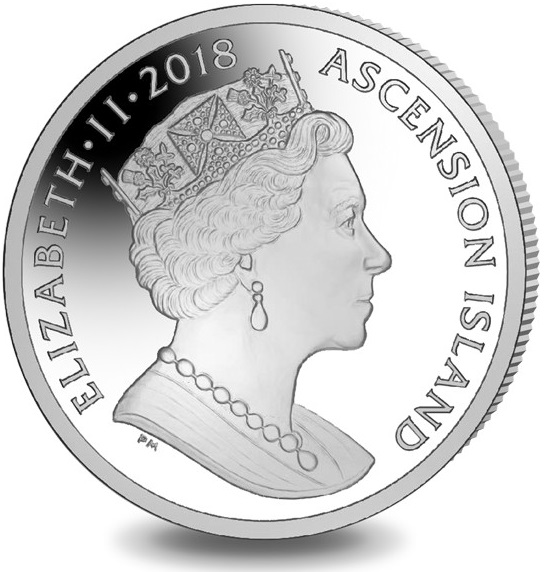 The obverse of the coin features a fine effigy of Her Majesty Queen Elizabeth II, which is an exclusive design to the Pobjoy Mint. 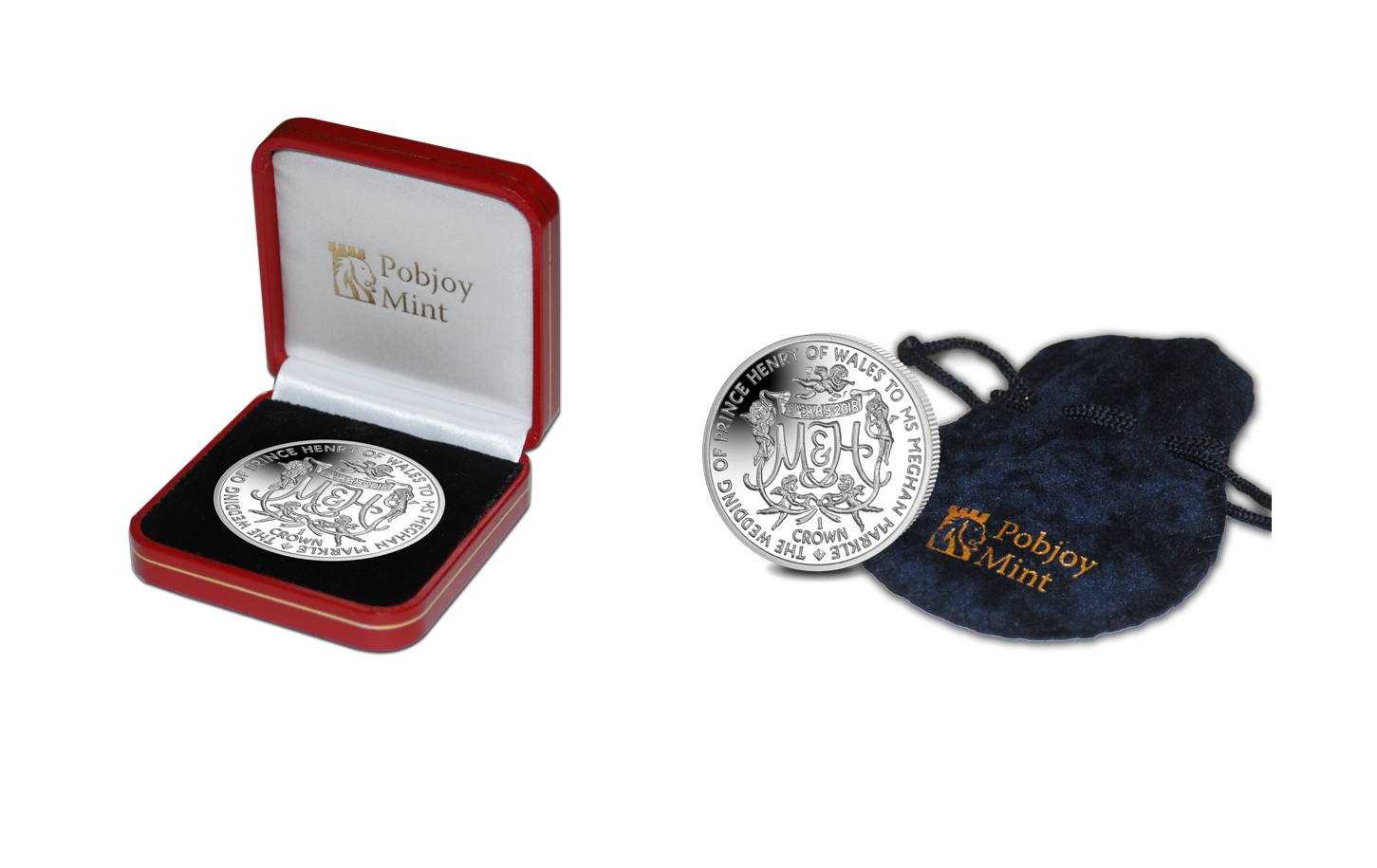 The Proof sterling silver coin is encapsulated in an acrylic capsule for protection and housed in a custom branded red presentation case along with a certificate of authenticity. The cupro-nickel examples are presented in a branded cloth protective pouch. For additional information on this coin and others issued from the treasury of Ascension Island, please visit the website of the Pobjoy Mint.