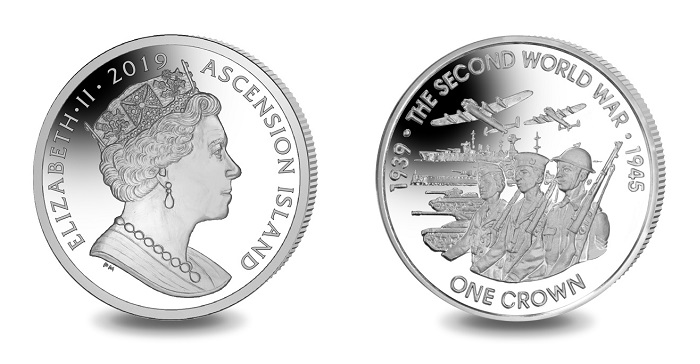 The government and treasury of Ascension have issued (22nd May) new crown coins marking the 80th anniversary of the initial outbreak of fighting, which ignited a world conflict that would involve countries across the globe.

As Europe witnessed the rise of the Third Reich of Germany, many predicted that war was inevitable. Territorial claims by the Third Reich in Czechoslovakia in 1936 and rising tensions between Germany and Poland, who had been in an alliance of protection with France and Great Britain, meant they were in the line of fire. In an agreement between the Foreign Ministers of Germany and the Soviet Union, Von Riebentrop and Molotov, who had planned for the division of the Polish state between the two countries. Hitler had long been determined to regain former German territory lost as a result of the Versailles Treaty concluding the Great War in 1918 which ceded former German lands to the new Polish state. As a result, Germany accused Polish troops of breaching the border between the two countries, which was used as a prelude for an all-out invasion that occurred on the 1st September 1939.

In an effort to avoid an all-out war between the Third Reich and Great Britain, whose defence pact with Poland would be enacted, the then Prime Minister Neville Chamberlain warned Hitler to pull his army out of Poland, or British forces would come to Poland’s defence. He announced his intentions to do so to the British public, and the world at large, in his radio speech to the nation on the 3rd September 1939:

This morning the British Ambassador in Berlin handed the German Government a final Note stating that, unless we heard from them by 11 o’clock that they were prepared at once to withdraw their troops from Poland, a state of war would exist between us. I have to tell you now that no such undertaking has been received, and that consequently, this country is at war with Germany.

Following the breakdown of the agreement between Soviet Russia and the Third Reich, Soviet forces invaded Poland on the 17th September and would join the alliance against Hitler. Germany would go on to sign strategic treaties with Italy and Japan to try and position the Third Reich at the forefront of world domination. The invasion of Poland in 1939 was the catalyst in Great Britain and France declaring war on Germany, which marked the start of the war. The Second World War was the most devastating and cruellest seen in human history; fatalities went beyond 50 million, most of whom were civilian. During World War II, to strengthen and supply patrol operations ongoing from the early days of the war, an airbase was built on Ascension Island, which was known as “wideawake.” The name came from a nearby colony of terns which were locally called “wideawake” birds because of their loud chatter. The U.S. Military used the airfield as a stopping point for the aircraft between crossing the Atlantic Ocean on the way to Europe and Africa. The unconditional surrender of Germany only came after the suicide of Hitler on the 30th April 1945. He faced ultimate destruction by the allies of the United States, Great Britain, and the Soviet Union, the latter of which had invaded Germany from the East. A peace treaty was signed on the 10th February 1947, formally concluding the end of hostilities, and which saw the division of Germany between the four powers: The United States, Great Britain, France, and the Soviet Union. The Soviets oversaw the instalment of a communist government in what became the German Democratic Republic. The three sectors administered by the other three allies would go on to form the Federal Republic of Germany. The two countries eventually reunited in 1990 just before the final collapse of the Soviet Union in December 1991. 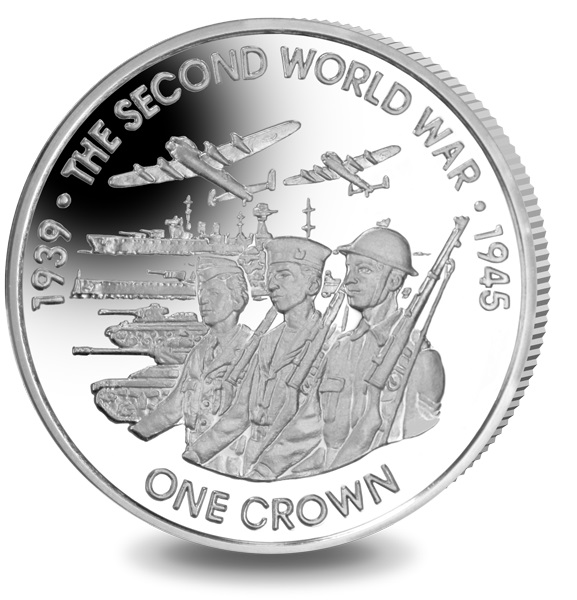 The coins are produced by the Pobjoy Mint at their facilities in Surrey, England, on behalf of the treasury of Ascension. The reverse side of the coin features the soldiers at the forefront of the battleground with a representation of all the vehicles used in the war, such as the warships, tanks, and Lancaster planes. The inscription 1939 The Second World War 1945 is shown above the primary design. 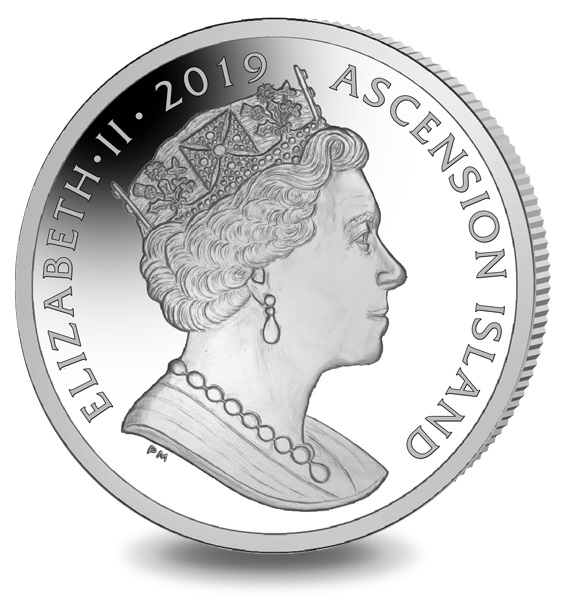 The obverse of the coin features an effigy of Her Majesty Queen Elizabeth II, which is an exclusive design of the Pobjoy Mint. The issuer ASCENSION is included in the legend around the portrait. 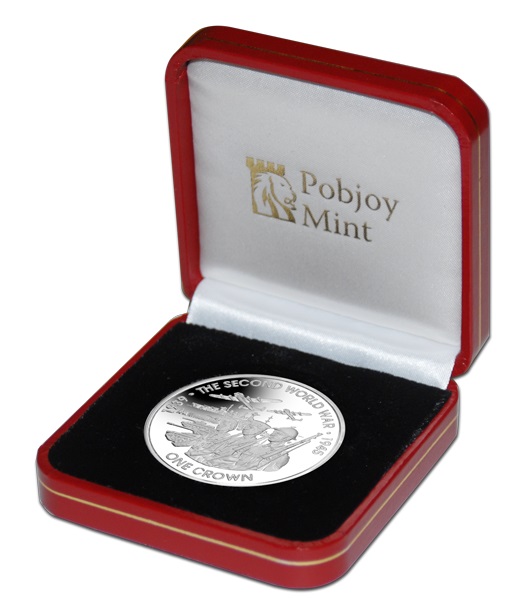 The Proof sterling silver crown coins are presented in a custom red case that includes a certificate of authenticity. The cupro- nickel coin is housed in a blue presentation pouch. For additional information about this coin and others issued by the government and treasury of Ascension Island, please visit the website of the Pobjoy Mint.