The Treasury of the Government of Ascension Island has issued a new coin commemorating the 175th Anniversary of the well-known Two Pence Blue stamp, also known as the Tu’penny Blue. A special colored coin is being released on behalf of this anniversary.

In 1990, with the release of the Penny Black Crown, the two worlds of numismatics and philately were successfully brought together. This coin proved exceptionally successful, as did many coins issued later that featured special stamps.

It was Sir Rowland Hill who promoted the concept of a single, uniform charge for the delivery of post regardless of distance within the United Kingdom. From this concept the modern postal system was born and the Penny Black and Two Pence Blue stamps were issued by the Royal Mail on May 6, 1840. This simple concept of issuing a receipt and proof of payment for postage was quickly adopted by every country in the world; this year, 2015, the great British innovation turned 175 years old. 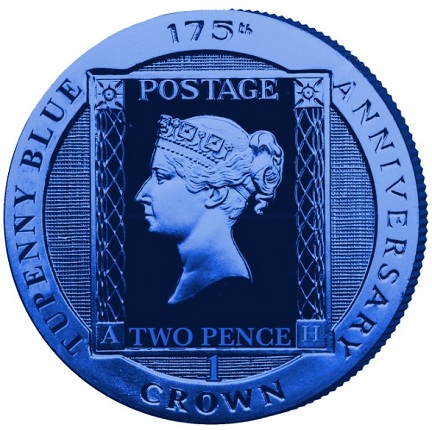 To celebrate this milestone anniversary, the Government of Ascension Island has approved the release of a special coin depicting the Tu’penny Blue as struck by the Pobjoy Mint UK, originators of the 1990 and 2015 Penny Black crown coins. This rare stamp is perfectly recreated on the reverse side of the coin, which has been produced with a beautiful and unique Pearl-effect blue finish. 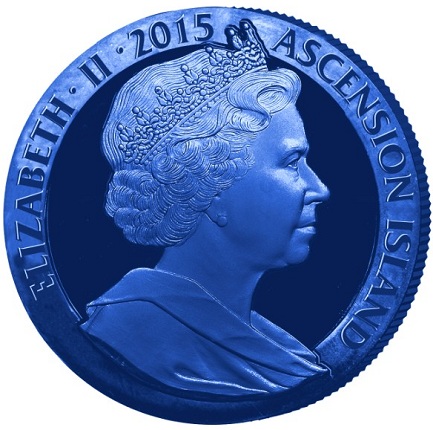 The obverse of the coin features an effigy of Her Majesty Queen Elizabeth II by Ian Rank-Broadley FRBS.

The coin is available in blue cupro nickel (BU) and blue sterling silver (Proof). All of the coins are produced to the highest quality: the precious metal Proof coins have been struck four times to produce a glorious mirror finish background, with the design sculpted in striking relief.

For more information on this and other coins offered by the Treasury of the Government of Ascension, please visit the Web site of the Pobjoy Mint. Information is offered in English, with international orders dispatched where applicable.