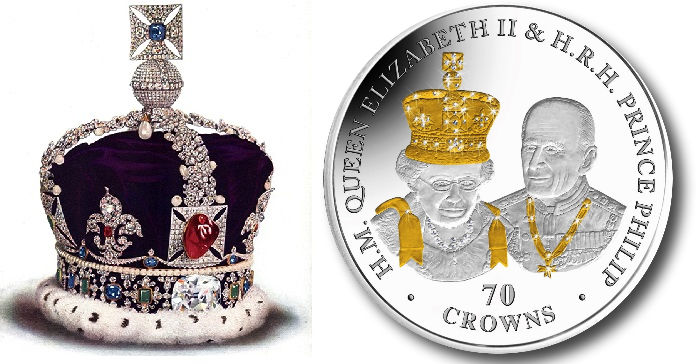 The government and treasury of Ascension Island have issued (14th November) an extraordinary tribute for the platinum wedding anniversary of HM Queen Elizabeth II and HRH Prince Philip, the Duke of Edinburgh, who reached this milestone today (20th November 2017). A 70-ounce silver Proof coin has been produced for the anniversary with a very limited mintage. Achieving a platinum wedding anniversary is an exceptional time for celebration, and, in order to rejoice in the royal couple’s milestone, the treasury of Ascension have issued a substantial numismatic tribute with a coin weighing 70 ounces (2.177 kilograms). This is now Ascension’s largest coin ever issued.

The couple first met at the Royal Naval College in Dartmouth in 1939 when the princess was just 13 years old, and her future husband, 18 years old. They began exchanging letters before and during the Second World War, eventually becoming formally engaged in 1947, following the princess’s 21st birthday. The royal pair married later in the same year on the 20th November and this year they celebrate their platinum wedding anniversary together. The then-Princess Elizabeth was crowned just five years after their wedding, following the death of her father, King George VI, who died aged only 56 years. Although the transition changed their lives forever, the couple have always approached their royal duties with a sense of humour and affection for each other, that, over the decades, is a testament to their enduring love. The Queen and the Duke of Edinburgh have made royal history as both the longest-married and the longest-living monarch and consort. HM Queen Elizabeth II and HRH Prince Philip have had an astonishing life together and have dedicated their lives to the duty of monarchy.

The coin is minted and hand-finished by the Pobjoy Mint, United Kingdom, on behalf of the treasury of Ascension. The reverse design takes its inspiration from the State Opening of Parliament, which is a formal occasion that marks the beginning of a parliamentary session or can be held after a general election. During the elaborate ceremony, which showcases British history, culture, and politics, the Queen wears the Parliament Robe of State and the Imperial State Crown with all accompanying regalia. For over 500 years, the Opening of Parliament has symbolised the unity of the sovereign, the House of Lords, and the House of Commons. The Queen has been accompanied by His Royal Highness at almost every state opening in which she herself attended personally, missing only those years in which she was pregnant with princes Andrew in 1960 and Edward in 1964. Each coin has been encrusted with 70 diamonds which weigh, in total, one carat. Spot gold plating has been used to highlight certain pieces of jewelry, such as the Imperial State Crown and the order around the Duke of Edinburgh’s neck. The obverse includes a dual portrait of HM Queen Elizabeth II and HRH Prince Philip, the Duke of Edinburgh. Each coin is hand finished in-house by master craftsmen with precise attention to detail. The issue limit of this coin is just 70 pieces, and each one will be accompanied with a matching numbered certificate to prove its authenticity. Each State Opening of Parliament coin, which is the Pobjoy Mint’s largest struck coin to date, is housed in a high-quality plastic capsule and presented in a beautiful custom wooden box. For additional information on this and other coins issued by the treasury of Ascension, please visit the website of the Pobjoy Mint, official distributors of the coins of Ascension.