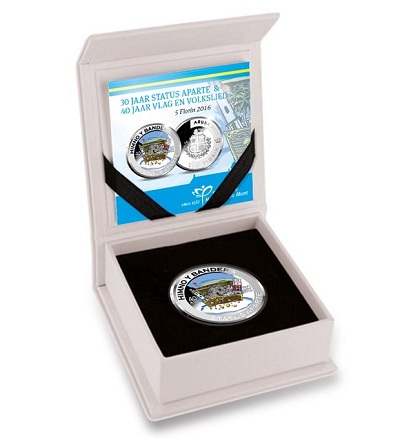 The Centrale Bank van Aruba has issued (August 4) a new coin celebrating both the 40th anniversary of the year the island gained its own national flag and anthem as well its 30th year as a separate entity within the Kingdom of the Netherlands.

Aruba did not become officially independent until January 1, 1986. The Dutch monarch – at the time HM Queen Beatrix — was to be recognized as the Aruban head of state under the new accord. Aruba’s executive authority vests in its Prime Minister and the Dutch monarch. Now King Willem Alexander is represented by an appointed Governor-General, who acts in place of the King when he is not in residence. The king’s most recent visit came in May of 2015, when he was accompanied by his wife, Queen Maxima. On the occasion of the King’s investiture on April 30, 2013, a coin was issued by Aruba welcoming their new monarch as head of state.

Aruba, Curacao, Bonaire (including St. Eustatius and Saba), and St. Maarten are the remaining territories of the Dutch Crown in the Americas; all are situated close to the northern coast of South America. 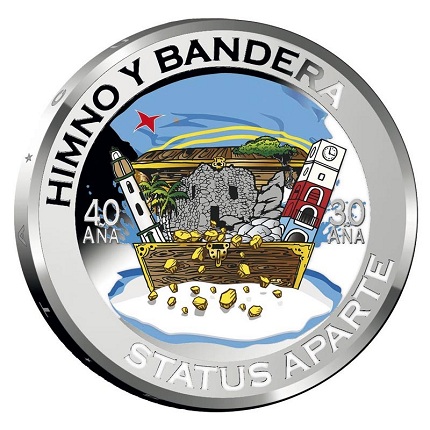 The coin is minted in sterling silver and includes a colorful design referencing the 30th year of independence, with elements celebrating the 40th anniversary of the Aruban flag and anthem. The stylized design depicts a “treasure chest” of Aruban symbols, representing well-known landmarks including the beach front of the island, which is world-renowned for its pristine shores and crystal-clear blue waters. 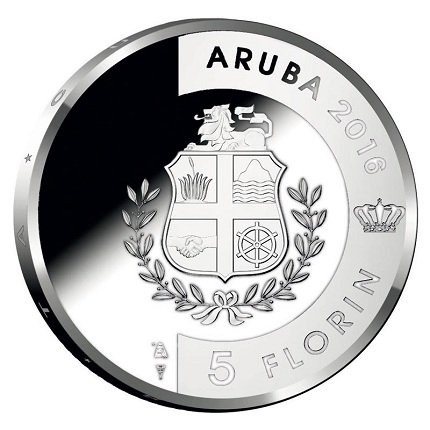 The text around the reverse design reads HIMNO Y BANDERA (“anthem and flag”). The obverse side includes the current Aruban crest along with the year of issue and denomination.

The coin is encapsulated and presented in a deluxe case with a certificate of authenticity. The Royal Dutch Mint is now accepting reservations for purchase for immediate delivery. For more information on this and other coins issued by the Central bank van Aruba, please visit the Web site of the Royal Dutch Mint. Sales and dispatch to European destinations only.