The design selections for the 2011 Army Commemorative Coins were officially announced by the United States Mint on December 11, 2011. The announcement took place during the annual Army/Navy football game played in Philadelphia, Pennsylvania.

The commemorative coin program will include $5 gold coins, silver dollars, and clad composition half dollars. The authorizing legislation specifies that the designs are to be emblematic of the traditions, history, and heritage of the U.S. Army and its role in American society from the Colonial period to today. 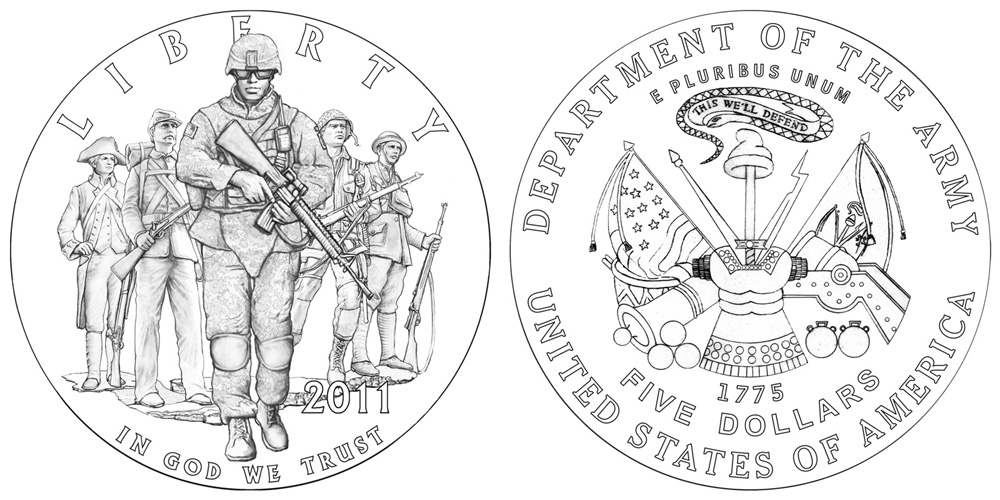 The 2011 Army $5 gold coin represents the U.S. Army’s service in war. The obverse depicts soldiers from five different eras, from left to right, the Revolutionary War, Civil War, modern, World War II, and World War I. Inscriptions include “Liberty”, “In God We Trust”, and the date. The reverse of the coin is based on the official U.S. Army emblem. Inscriptions include “Department of the Army”, “United States of America”, “E Pluribus Unum”, “Five Dollars”, “This We’ll Defend”, and the date of founding “1775”. 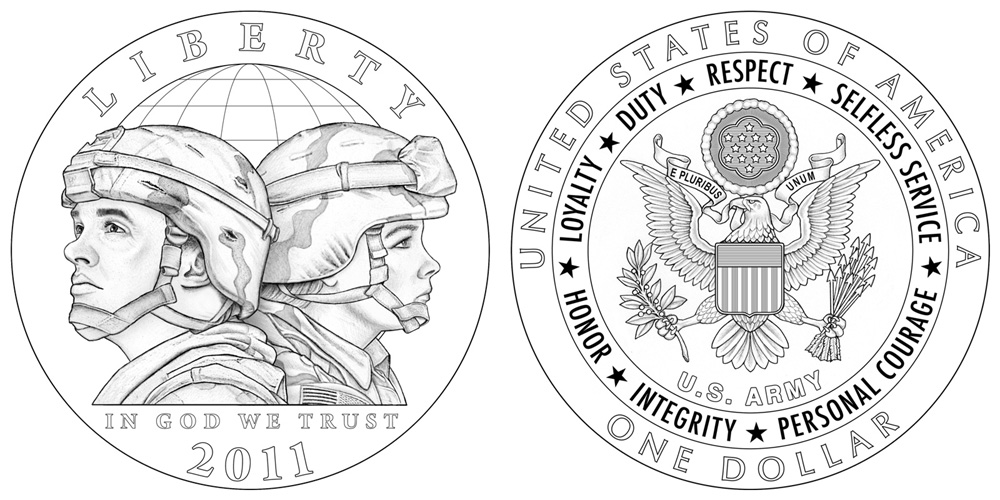 The 2011 Army silver dollar represents modern service. A male and female soldier are pictured back to back, with a globe in the background. Inscriptions include “Liberty”, “In God We Trust”, and “2011”. The reverse of the coin includes an image of the Great Seal of the United States. The seven core values of the U.S. Army surround the seal separated by stars, “Loyalty”, “Duty”, “Respect”, “Selfless Service”, “Honor”, “Integrity”, and “Personal Courage”. Additional inscriptions read “United States of America”, “One Dollar”, “E Pluribus Unum”, and “U.S. Army”. 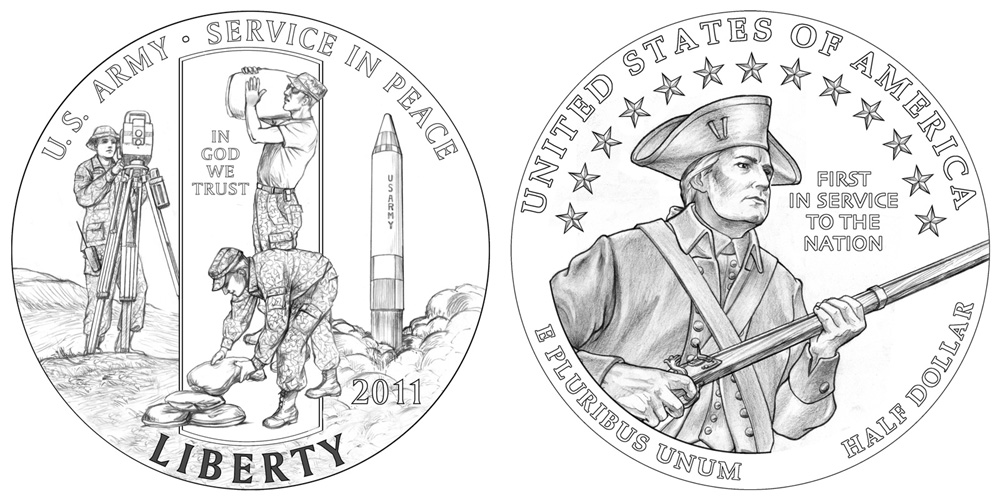 The 2011 Army Half Dollar represents service in peace. The obverse depicts different activities related to the theme, including a soldier surveying, two servicemen building a flood wall, and the Redstone Army Rocket. Inscriptions include “U.S. Army”, “Service in Peace”, “In God We Trust”, “Liberty”, and the date. The reverse depicts a Continental soldier with musket with thirteen stars and the inscription “First in Service to the Nation”. Other inscriptions include “United States of America”, “E Pluribus Unum”, and “Half Dollar”.

The United States Mint has not announced when the coins will go on sale, but under the authorizing legislation, the coins may be issued during the one year period beginning January 1, 2011. The maximum authorized mintages are 100,000 of the $5 gold coins, 500,000 silver dollars, and 750,000 half dollars, across proof and uncirculated versions. Surcharges added to the cost of each coin are distributable to the Army Historical Foundation.

Earlier, the US Mint had announced the design selections for the 2011 Medal of Honor coins. Together these represent the two commemorative coin programs authorized by Congress for 2011.