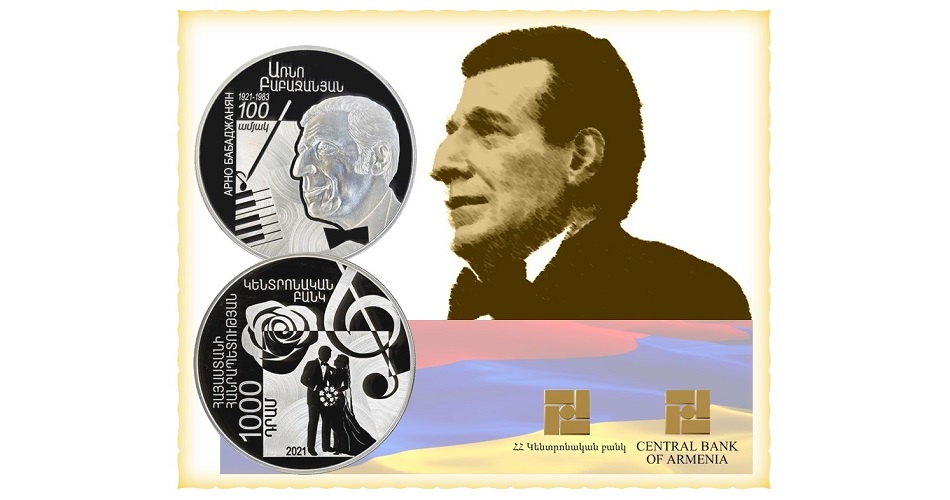 The Central Bank of Armenia has issued (18th January) new silver Proof collector coins on the occasion of the centenary anniversary of the birth of one of the country’s most notable and celebrated musicians in the modern era. Arno Babajanyan(1921–1983) holds a special place in Armenian and Soviet-era musical history thanks to his unique natural talent, deep sensitivity, and musical expression. He remains one of the most-loved composers in his homeland and further afield in countries that comprised the former Soviet Union, Eastern Europe, and the Middle East.

Born in Yerevan, Armenia, on the 22nd January 1921, his musical talents seemed to be immediately and distinctly apparent to his family and teachers. By the age of five, the well-known Armenian composer Aram Khachaturian suggested that the boy be given proper music training. Two years later, in 1928, Babajanyan entered the prestigious Komitas State Conservatory of Yerevan and had already written his first musical composition at the age of nine.

In 1938, he continued his studies in Moscow with Soviet composer Vissarion Shebalin, with Babajanyan graduating from both the Yerevan and the Moscow Conservatories. In 1950-1956 he managed to secure a teaching position at the Yerevan Conservatory, while, at the same time, composing and perfecting his talents as a musician. A celebrated piano virtuoso, Babajanyan was known for performing his own works. However, the renowned composers Khachatryan and Rachmaninoff had an influence on the artistic formation of Babajanyan’s creative style, which was mostly expressed in his early works such as the piano concert (1944) and the violin concert (1949). The works Vagharshapat Dance, Prelude, and Impromptu, won the first prize at the first World Youth and Student Festival in Prague in 1947. The composer’s creative personality was obviously shown in his composition entitled Heroic Ballad (1950), written for the piano and orchestra (USSR State Prize, 1951), then in the piano trio (1952).

Babajanyan was effortlessly able to compose in different styles such as classical, pop, or jazz, though much of his music was rooted in Armenian folk music and folklore. Babajanyan became one of the prominent masters of song during the Soviet era and was even praised by Dmitri Shostakovich as being a “brilliant piano teacher.” He wrote many lyrical songs, music for dramatic performances such as Saroyan’s My heart’s in the highlands, and Soviet-produced films entitled The first love song, On the path of thunder, and The mechanics of happiness.

During his eventful and varied career, he subsequently undertook concert tours throughout the Soviet Union and Europe. In 1971, he was named a People’s Artist of the USSR — an honorary title granted to performing and illustrative artists of the Soviet Union. Arno Babajanyan died in Moscow on the 11th November 1983 at the age of 62 years old. In memory of one of Armenia’s best-known modern composers, the State Philharmonic Hall of Armenia located in Yerevan was first constructed in 1921, the year of Babajanyan’s birth, and was named in his honour in 2003. 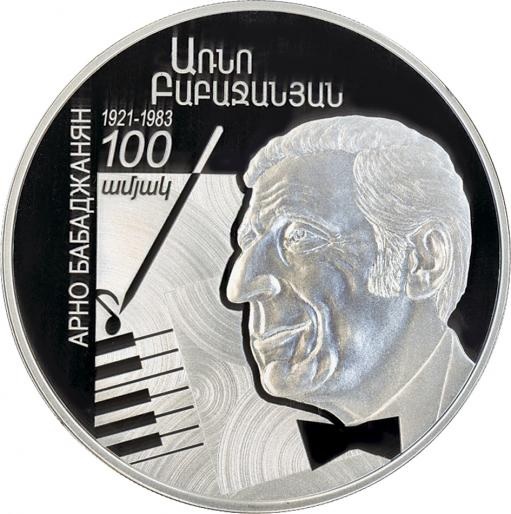 The silver Proof quality coins are produced by the Mint of Lithuania at their facilities in Vilnius, on behalf of the Central Bank of Armenia, and are designed by Vardan Vardanyan. On the obverse side is a right-facing rendition of Arno Babajanyan. To his left are the images of piano keys and the distinctive grooves of vinyl records, along with a musical note and a pen, signifying his talents as a composer. To the left in a vertical direction is the Russian text АРНО БАБАДЖАНЯН and to the right of this are the commemorative years 1921 – 1983, along with the anniversary notation 100. Above the primary design is Arno Babajanyan’s name in Armenian letters ԱՌՆՈ ԲԱԲԱՋԱՆՅԱՆ. 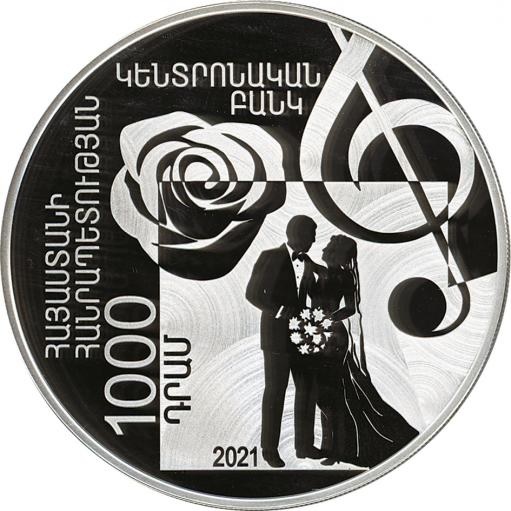 The reverse side depicts a wedding couple shown within a square shape in front of a backdrop of vinyl records, symbolic of the many romantic songs composed by Babajanyan during his career. Above the couple is a depiction of a stylised rose and musical clef insignia. Shown in vertical text is the coin’s denomination of 1000 ԴՐԱՄ (“1000 Dram”) in Armenian.

Each coin is encapsulated and presented in a custom case, accompanied by a certificate of authenticity. The coins are available for collectors residing in Armenia through the Central Bank of Armenia’s retail desk at 3 Deghatan Street in Yerevan — open Monday to Friday, from 10:00 a.m. to 4:00 p.m. Break time from 1:30 p.m. to 2:30 p.m. Contact phone: +374 10 592 941.

A complete list of available collector coins and banknotes from the Central Bank’s retail desk is available to view here.