Our series on classic commemoratives has reached the second part of the 1930s, a period in numismatics known for its so-called abuse of the commemorative program. The large number of issues released between 1936 and 1939 came after more than three decades of the intermittent but regular release of commemoratives celebrating local and national events. But by 1936 the downward spiral had started. Over the next two years, interest in and sales of classic commemoratives would slowly dwindle, with only a few commemoratives issued until the mid 1950s. After that, the program was abandoned altogether until the early 1980s, the start of the modern period. 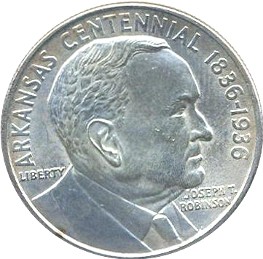 Senator Joseph Taylor Robinson, depicted on the obverse, was only the fourth person ever to be featured on a coin while still living. A lifelong Democrat and resident of Arkansas, he was born in Lonoke, Arkansas in 1872. In 1894, he entered Arkansas politics and was elected to the House of Representatives in 1902. A decade later, he served as Governor of Arkansas for a few brief months in early 1913 before becoming a United States Senator in March of that year, remaining in that position until his death in 1937. From 1933 to 1937, he also served as the Majority Leader of the Senate after having been the Democratic leader since 1923. Because of his importance in the history of Arkansas politics, Robinson’s portrait was favored over the image of Hernando de Soto and a Native American woman initially suggested by the Centennial Commission.

The obverse was initially drawn by Enid Bell and later modeled by Henry G. Kreiss. It featured a close view of Robinson from his right side. The words “ARKANSAS CENTENNIAL” and “1836-1936” are seen around the head. Behind Robinson is the word “LIBERTY” and his name, “JOSEPH T. ROBINSON,” is seen directly under his chin. The reverse is identical to that seen on the Arkansas Centennial issues of 1935 to 1939 and was designed by Arkansas resident ­­Edward Everett Burr, later modeled by Emily Bates. The reverse’s main design element is a realistic American eagle with stretched wings. The eagle rests on a sun, the rays of which cover virtually all of the reverse. On the sun itself are the words “HALF DOLLAR” and the date of issue. In the eagle’s beak is a scroll, with the words “IN GOD WE TRUST” on the viewer’s left side and “E PLURIBUS UNUM” on the right side. Part of a triangle or diamond-shape featuring thirteen stars is seen above the eagle; this is part of the Arkansas State flag, which features a square with 25 stars. Within the space created above the eagle is the word, “ARKANSAS”. Below this are three stars, signifying the three nations that have ruled over Arkansas: Spain, France, and the U.S. Above the name of the state is a single star signifying Arkansas’s involvement in the Confederacy during the American Civil War. Along the top is “UNITED STATES OF AMERICA.” 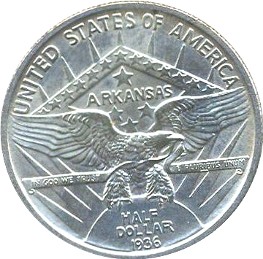 Dated June 26, 1936, the act authorizing the issue provided for a minimum of 25,000 coins to be minted, with a maximum of 50,000 pieces. The final mintage, excluding pieces held separate for the annual assay commission, was 25,250 coins. Though the coins had to be dated “1936” due to a provision included in the authorizing act, production did not start until January of 1937. Stack’s offered the coins for $1.85 each, expensive for a commemorative issue at the time. Sales were lackluster to say the least. Incredibly, one dealer is known to have purchased 8,000 pieces, almost a quarter of the mintage, and the 1936 Arkansas-Robinson remains one of the more available classic commemoratives to this day.

Virtually the entire mintage is believed to still exist in mint state. Most pieces grade MS-64 or MS-65, and even the latter can be found certified by the major grading services for less than a few hundred dollars. This issue was distributed by Stack’s in a cardboard folder inside of an envelope. Toning is common, both attractive and not quite as attractive, but this is an issue for which it is quite rare to find rainbow-toned. Even those certified MS-67 (which are rare) and MS-68 (of which only a few are known to exist) often only feature minor toning compared to some other commemoratives of the period.