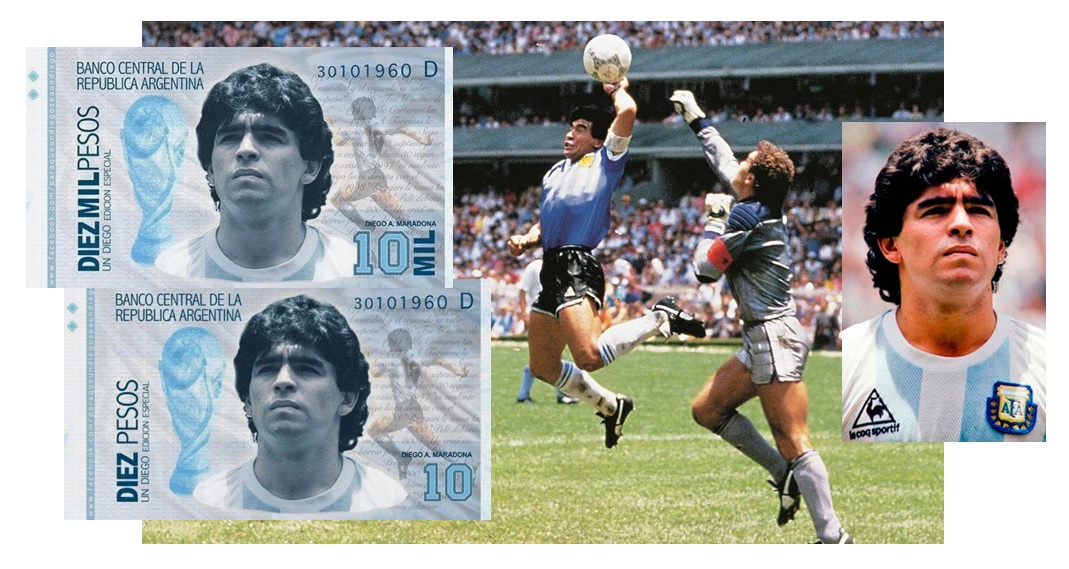 During his lifetime, Diego Maradona (1960–2020) was considered a national treasure especially to a football-obsessed country like Argentina. The death of Diego Armando Maradona was an especially bitter pill for Argentinians to swallow, especially during the current pandemic. On the 25th November 2020 Maradona suffered a cardiac arrest and died at his home in Buenos Aires Province. He was 60 years old.

Shortly after his death, there have been loud calls from the public and now even Argentinian lawmakers to include the image of Diego Maradona on the country’s banknotes. As a measure of respect to their hero, Argentine compatriots want to give him back some of the love and adoration he always professed for his country. The Argentine government has now proposed a bill in the Senate so that at least half of the banknotes of 1,000 pesos or greater value are printed with the face of the Maradona and an image of the iconic goal to England (in the quarterfinals), in tribute to his memory.

Maradona became a national hero in the World Cup Mexico 86, “el DIEZ” — as he was affectionately referred to — referencing the number on his jersey, was the star of the game as the captain the Argentine national team. Controversy arose when, during one of the goals, Maradona head-butted the ball, however, replays showed that the first goal was scored by striking the ball with his hand. In his usual style, Maradona was coyly evasive, describing it as

This phrase, which was soon treated as a slogan, remained with him for the entirety of his professional playing career, which he often took full advantage of. Despite the circumstances of his retirement, the ever-popular bad boy of football remained an endearing figure in Argentina and around the world. His exploits off the football field were as legendary as those on with Maradona living up to the image of the most famous Argentinian athlete and world-class celebrity footballer.

The banknote initiative was presented by Argentinian Senator Norma Durango, who touched on the personality of Maradona describing the most internationally recognised footballer as someone with pluses and minuses in terms of his life and personality. For many, these imperfections only endeared him closer to Argentinians. The young man from humble beginnings rose to international notoriety and elevated the “beautiful game” to even greater heights. 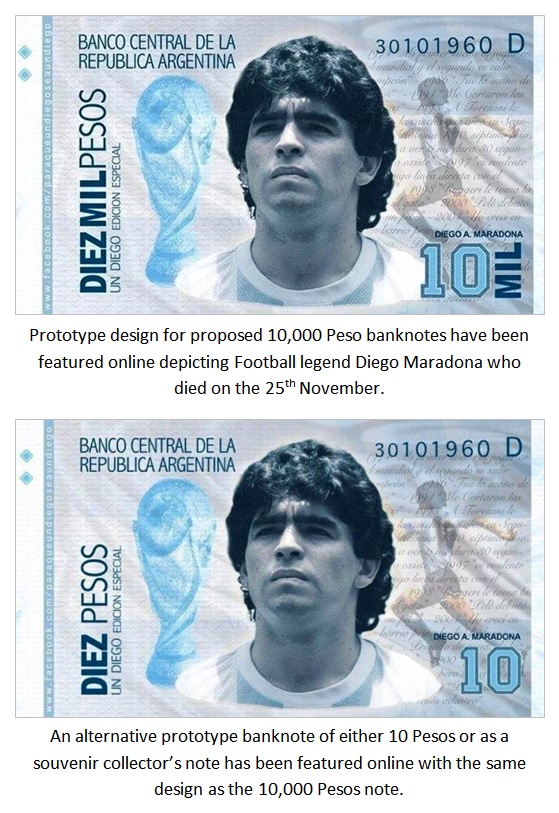 Argentina’s ruling party has presented a bill in the Senate so that 50% of new 1,000-peso bills or if a higher denomination is issued in 2021 will bear Diego Maradona’s image on one side and an image of the second goal on the other. It is possible the Maradona banknotes may end up as collector pieces rather than in general circulation. With this proposal in mind, there have already been prototype designs circulating online to depict both Diego Maradona and his famous goal along with the World Cup trophy. Currently, the Argentinian peso is undergoing a phase of devaluation on the currency markets and a proposed 10,000-peso banknote would be equivalent to U.S. $122, and most likely introduced for general circulation. The option would be a collector’s edition 10-peso souvenir note.

As a final tribute to the sporting legend, Maradona’s coffin was draped in Argentina’s national flag along with three Maradona number 10 jerseys, Argentinos Juniors, Boca Juniors, and Argentina, which were all lying in state at the Presidential Palace, the Casa Rosada, with mourners filing past his coffin. After the public services, he was buried next to his parents at the Jardín de Bella Vista cemetery in Bella Vista, Buenos Aires. Public petitions started in Argentina have garnered more than 10,000 signatures in the first days of its online posting. The legend of Maradona, in addition to being the greatest Argentine popular idol, will be fondly remembered as one of the most outstanding athletes in the world who could soon be included on banknotes as a lasting tribute.